Being a great combination of luck and strategy, the game of Poker is one of the most popular casino games. In order to become a master in the game, understanding the Hand Ranking System is the most crucial and the dominant part. Thus, our gaming experts have enlisted everything about Hand Ranking System in the simplest way possible!

In the game of Poker, you are dealt with 5 cards and your win is dependent on the combination of  hands. In Poker games like Texas hold'em and Seven Card Stud,  the higher your poker hand, more money you score! Cards in Poker are ranked from highest to lowest as Ace, King, Queen, Jack, 10, 9, 8, 7, 6, 5, 4, 3, 2 except in the situation of Straight or Straight Flush.

You must read through, to learn the art of hands in Poker. Also, our experts have enlisted the hands according to the place it has in the game. For example, Five of a kind is the hand that makes you win the most and if you get none of the combinations, High card is the last option you look for. 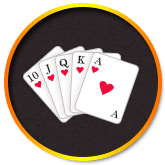 A situation when all your cards are identical with same suit and in sequential order.

When all your cards are in a sequence and of same suit.

All your cards are in a sequence with different suits.

When all the cards are of same suit and different ranks.

Four of a kind

When the value/ranks of four cards are similar and one card has a different value. 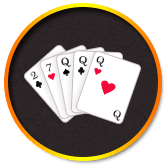 Three of a Kind

A situation when you get three cards with same value and the other two are different. 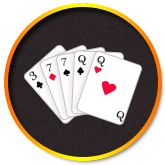 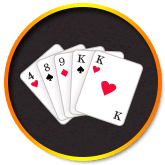 You get a single pair i.e two cards with same rank and other three different. 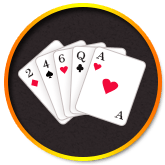 A situation when your cards are neither of same suit, rank nor in a sequence. You just have a single card with a high value compared to others.