Enter the magical World to Get Some Big Wins By Your Side With Abracadabra Poker Style Slot!

Abracadabra is 5 a reel poker style slot machine by Betdigital & NYX gaming. This game does complete justice to its name and theme as magic frequently happens on its reels. Fruit symbols appear on the reels of the games which stand against the background of stage of a magic show with red curtains along with stars and moon embedded on it, that will take you to a magical world.

All you have to do is click on hold or draw to replace the cards to land a combination of 3, 4 or 5 of one of a kind of symbols. And to add more fun, a magic hat appears every now and then replacing the symbols randomly such that you land a winning combination and brings guaranteed wins! The bonus symbol which gives a chance to multiply your wins by 1, 2 or 10 every time you get 3, 4 or 5 of them on the reels; is going to make it a symbol you are going to look forward to see on the reels during the game play.

The distinctly written name of the game on the top of the reels on the cards, the colors and the music used are going to make you fall in love with the game play.

The 5 reels of this game are set on the stage of a magical show. Red curtains with the stars and moon on it and the glittery stars on the top right and left hand side are going to take you to the magical world. Symbols used have been brightly colored and add to the appeal of the game play. The way the name of the game is written on the cards at the top and the precise bifurcation of the name as Abra – Card – Arbra brings out the theme of this online slot really well. The frequently occurring magic hat with assured wins and the music in the background add more fun to game play.

The symbols used in this online slot game include fruits like blue berries, watermelon, mango, oranges, cherry, the number 7, bonus card and the bar symbol. All the symbols have been brightly colored and stand vividly against the red background. Each symbol with its associated wins, depending on the number of one of a kind symbols you land - 3,4 or 5 have been given at the bottom of the reels and add more fun to the game play.

The payout of the same combination varies according to your betting amount such that the max bet placed gets you the most wins.

Along with a game full of fun and magic, Abracadabra also brings for you ample of chances to win. The bonus features in the game include a magical hat and the bonus cards and have been explained below :

When the bonus round starts, the table is cleared and 17 cards are dealt. Out of these, 5 cards fill the top row and the remaining 12 occupy the relatively smaller positions beneath it in turns. Depending on the number of cards of same symbol, the wins are paid the cards and remaining cards take up these positions until no cards are left.

The magic hat appears randomly during the game play. Whenever it appears, it replaces the symbols on the cards such that you land at least one winning combination. So, every time you see this hat appear, which happens quite frequently, you can look forward to have some thrilling wins by your side!

The magic of this 5 reel poker type slot is brought to you by Betdigital gaming, which was founded in 2011. This is one of the fastest growing software brand which has been working as part of NYX gaming since 2016. The quality of gaming that this software brand provides can not be questioned and is attributed to the fact that it uses it own proprietary software viz GIR and SystemX.

Abracadabra is another proof of the magic that this brand has the potential to create, not only it has a great layout but is known for its large payout which can verified from the fact that it has already paid out a win of  €20,000 the same the day it was released.

So, get ready to enter the mystical world and let the magic begin as you get a chance to get some big wins by your side. 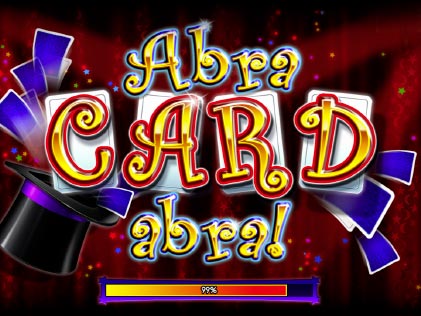 The 5 reels of this online slot by Betdigital gaming are set on a magic show stage with red curtains and imagery of stars and moon on it. The name of the slot, on the top of the reels has been has written on cards and has been smartly bifurcated as Abra-Card-Abra, adding appeal to the game play.

Fruit symbols along with number 7, the bonus card and bar card appear as you spin the reels. Everytime the reels spin 5 cards appear, you can either choose to hold the cards or click on draw to land 3, 4, or 5 symbols of a kind. The amount that you can fetch by landing cards of each combination have been intricately given at the bottom of the reels and adds to the ease of game play.

True to its name, magic does take place on the reels of the game and a magic hat appears time and again which replaces the symbols to land a winning combination. But, the show's not over yet, land at least 3, 4 or 5 bonus symbols and multiply your wins by 1, 2 or 10 with its bonus round!