Overview of Age of the Gods: Mighty Midas

This 5 reel- 3-row online slot game with 40 pay lines has been developed by Playtech and is based on the ancient Greek classic of King Midas who could change everything into gold with his touch. Although this ability proved to be a fatal curse for him, it is definitely going to be a bliss for you in this online video slot machine. This great fable has been presented in a royal fashion to the players in this game. Furthermore, the symbols used include some fruits, rose, wine, roasted chicken and King Midas himself along with his royal family (Princess Marigold and his sons Lityerses). To keep in sync with its theme, God Dionysus and his mentor Selenius are present on the reels of the game as well.

It also has plenty of bonus features that include Emerald Bonus, Ruby Spins, Amber Spins, Sapphire Spins and the Amethyst Spins along with four jackpots which are randomly triggered. A Golden touch feature has also been added which is induced by a golden hand always pointing to the left and changing everything it points to gold, just like the mighty Midas which beautifully brings out the theme of the game and some massive wins for the player.

How To play Age of the Gods: Mighty Midas Slot?

Although, this game has a number of bonus features to add to the winning probabilities of the players yet Playtech has managed to keep the game-play simple making it easy to try your hands on. Just choose the amount you want to bet to be a part of the fun. You can use the following button to do so or to enhance the gaming experience -

Autoplay – Located next to win window where your winnings are displayed, this option is used to spin the reels automatically. Choose any number - 10, 25, 50 or 99 for which you want the reels to spin by themselves to start this feature. Keeping in mind, the large number of bonus features, an option, 'until bonus features' has always been added which stops this feature when a bonus is triggered.

Turbo Mode: Turning this feature on speeds up the gameplay.

Spin: Use this button to start spinning the reels of the game when you are ready.

Rules to Play Age of the Gods: Mighty Midas Slot

Features of Age of the Gods: Mighty Midas Slot

The reels of this game by Playtech are placed in the royal place of the King of Midas. These transparent reels glide in front of a grayish background and are enclosed in a golden frame making it look like a golden chamber. Symbols used consists of the Royal family of the King of Midas (daughter and sons), Ancient Greek gods (Dionysus and his mentor Selenius) and some royal treats that include wine, chicken and fruits. In all, this game has a perfect blend of HD graphics, simple gameplay and apt background music which is going to be loved by the players. Although none of the characters shimmer or are brightly colored, yet they manage to stand out on the reels because of the high-quality graphics and visual effects, peculiar to all the Playtech games.

High paying Symbols - The high paying symbols used in the games consist of the King Midas himself and his royal family. They include his daughter – Marigold and his son Lityerses also known as the reaper of men because of his exceptional sword skills and ruthless nature. Justifying the theme of the game, Dionysus (the God of wine) can also be seen on the reels of the game with grapes in his hands against the purple background, his tutor Selenus – the big fat man is also present as well and is one of the highest paying symbols in the game.

Low paying Symbols – The low paying symbols used in the game are the things that you can witness in any royal feast. They include roasted chicken, fruits (apple and grapes) and wine glasses. Although they bring comparatively lesser wins for you but and add to the beauty of the game.

Wild - A brick golden in color with the word “Wild” inscribed on it is the wild symbol used in the game. It replaces all the symbols except the Scatter Symbol.

Midas Touch Symbol – It is a golden hand with one finger of hand always pointing to the left. It appears on all the reels 3, 4 and 5 and turns the symbols it points towards into wild.

Scatter Symbol – The pentagram in rainbow colors is the scatter symbol used in the game and appears only on the reels 1 & 5. It helps you unlock one of the five bonus features viz Emerald bonus, Amber Spins, Ruby Spins, Amethyst Spins and Sapphire Spins.

Midas Touch – This is one of the most interesting features used in the game as the entire theme of the game is based on it. With this feature any symbol the Midas touch symbol point towards turns into wild. Furthermore, it itself collapses after making the symbol wild making way for even more winning combinations. If this points towards a golden wild it increases the wild multiplier by 1x.

Along with this bonus, there are 5 more bonus features in this game. These are triggered when the scatter symbol lands on reel 1& 5 in the same spin. The bonuses that you get will be randomly decided and can be anyone out of the ones given below -

Emerald bonus – It rewards random multipliers to the players. In this bonus round, both the scatter symbols turn to reveal one number. These numbers are multiplied to get the multiplier that you will be awarded.

Amber Spins – With this bonus feature one of the high paying symbol is randomly assigned as the wild symbol for that spin before it starts.

Ruby Spins – This feature awards 7 spins to the players all of which will come with multipliers. Once this feature is triggered, you will see multipliers ranging between 2x to 10x on the right hand side of the frame enclosing the reels. These multipliers are awarded on every spin that generates a win in this bonus round leading to some massive wins.

Amethyst Spins – When this bonus feature is triggered, you get 3 bonus spins in which all the Midas touch symbols are double stacked. These turn the symbols next to them wild and collapse, making new winning combinations which often results in some big wins.

Jackpots - Just like all the games in this series, this slot game also has jackpots for the players. To make the game more interesting there is no specific strategy to activate them and all four of them are randomly triggered! 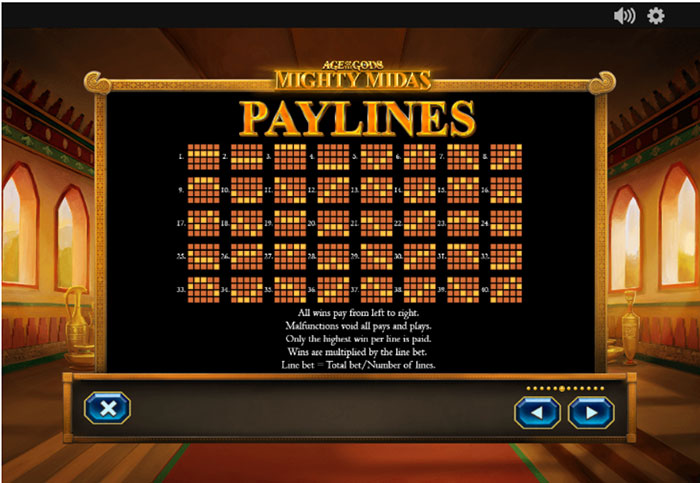 This online slot game with 5 reels and 3 rows has been developed by Playtech. One of the pioneer brands of the online gambling industry, it has already established itself as a global brand. This software brand has already produced some thrilling online slots and also works on other products like powering the casino and developing online sports products. The quality of the work it does reflect from the fact that it has a number of prestigious awards to its credit and has been named in the London Stock Exchange.

Talking about this game released by them recently, it is a part of the Age of the Gods series that has already won the hearts of the players and is definitely going to receive a warm welcome from the players.

Age of the Gods: Mighty Midas Slot Slot – Our Conclusion 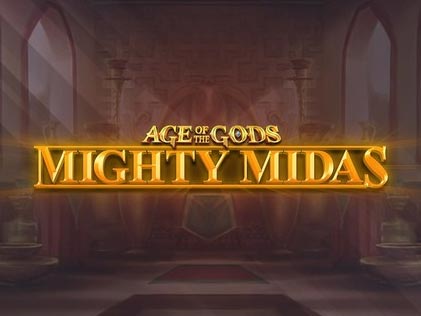 This slot game is another addition to the Age of Gods series by Playtech and like all games in the series, it consists of the generous use of high-quality audio and visual effects. Once you launch this game you will be able to see King Midas, his royal family (Princess Marigold and his son Lityerses), God Dionysus, his mentor Selenius and some fruits and wine glasses on the reels. These symbols used in the game are simple yet interesting and every symbol out theme of the game really well. Playtech has managed to keep the gameplay simple even after providing as much as 6 bonus features like Midas touch Emerald bonus, Amber Spins, Ruby Spins, Amethyst Spins, and Sapphire Spins. Each of this feature brings frequent big wins for the players. But the cherry on the cake is the four jackpots that are triggered randomly and bring huge wins.

Top Casinos to Play Age of the Gods: Mighty Midas

Rate Age of the Gods: Mighty Midas & Write a Review