Ancient Fortunes: Zeus is a 5 reel and 10 payline Video Slot powered by Microgaming, one of the top-notch online gaming software providers of the industry. Based on Greek mythology, the reels of this Slots machine are set on Mount Olympus. Spin the reels of this game to meet all the great Greek Gods including Zeus, Ares. Poseidon, Dionysus and Hermes. Other symbols on reels include snakes, panther, vultures and krakens. If you are fortunate enough to trigger Wild Symbol (symbol of God Zeus) and Scatter Symbol (symbol of lightning bolt) then my amigo, it is going to be worth every penny as you are in for some adventure. ‘Real money multiplier’ kind of an adventure!

Playable with a minimum of 10p and a maximum of £70, you can turn the reels of Ancient Fortunes: Zeus Slot on desktop, mobile and tablets. With bonus features like Rolling Reels, Multiplier Trail and Free Spins, you stand a chance to multiply your wins. Consecutive wins during the Rolling Reels round can lead to a 7 time multiplier whereas the application of Multiplier Trail in the Rolling Reels round can lead to a whopping win of 21 times. So, are you all prepped up to climb these mythical mountains of Greece to meet the ancient Greek Gods? If yes then head to any of the below listed Microgaming Online Casinos and enjoy instant play of this Slot game either for fun or real money.

Hamburger Button: The hamburger button appearing on the bottom-left corner comes in handy to toggle game menu. Click on this button and get an access to Settings, Paytable, Help, Autoplay and Bet.

Bet: The Bet button displays the total stake amount per payline for a specific spin. Use '-' and/or '+' to adjust your betting amount as per your pocket.

Max Bet: The Max Bet helps you to spin the reels for the highest possible betting amount, which in this game is equal to £70.

Spin: Use the Spin button to manually turn the reels of this Slot machine.

Autoplay: This button will come to your rescue when you intend to enjoy an interruption-free spinning of reels for a particular number of times. All you need to do is, choose any number (10x spins, 25x spins, 50x spins and 100x spins), take a seat and watch the action unfold without doing anything.

The reels of Ancient Fortunes: Zeus Slot machine are set in Mount Olympus which perfectly brings out the Greek mythological theme of this game. Ascend the clouded realms of this god ridden mountains in Greece to meet the great Greek Gods including Zeus, Hermes, Ares, Poseidon and Dionysus. The background music perfectly goes with the theme. Animations could have been better but it has still managed to decently engage players with its simple-looking graphics and gaming presentation. By and large, it is visually attractive just like any other Microgaming game.

Standard Reel Symbols: Inspired by the Greek mythology, you'll find Greek Gods and animals like panthers, snakes and vultures spinning all over the reels. Ares which is the God of War is the highest rewarding symbol. It pays out 62.50 times of your betting on triggering five on a payline.

Scatter Symbols: The lighting bolt symbol is the Scatter Symbol. Trigger 3 or more of this symbol to activate Free Spins round.

Wild Symbols: The Zeus God represents the Wild Symbol in this Slot machine. It is capable of substituting for all other symbols including the Free Spins symbols.

Inspired by the Greek mythology, Ancient Fortunes: Zeus is a 5 reel, 3 row and 10 payline Microgaming powered Slot game. Microgaming started its journey by introducing some of the most popular classic card games in 1994 and eventually in the year 2004, it became the pioneer of some groundbreaking mobile slots. This online gaming software provider has offered nothing less of a world-class entertainment ever since its inception. By paying out a total progressive jackpot network of more than €1 billion and setting the Guinness World Records for ‘Largest jackpot payout in an online slot machine game’ in the year 1995, Microgaming righteously boasts of having the largest progressive jackpot network in the world. If you are still not a part of the millionaire league, despite of playing at Microgaming Casinos then we highly recommend you to try your fortune on the money-making Mega Moolah Slot. Perhaps you may be the next one to be featured on Guinness World Records by striking a jaw-dropping win. 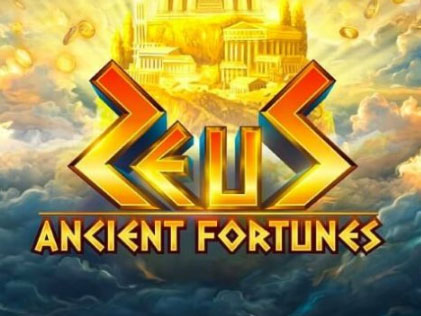 Ancient Fortune: Zeus Slot is a medium variance Video Slot which awards a maximum of x1399 of the betting amount. Being a Microgaming product, this Slot game pays a lot of attention to details, which makes it visually attractive and the sound effects simply adds to the theme. There is nothing too great about animations but it is still a decent looking game which will keep you entertained. If you are someone who loves to take their craze for Greek mythology to the reels then Age of the Gods Slot by Playtech is a must-try. Happy Slot gaming, amigo!