When the bombs start exploding the winnings start coming!

Arcade Bomb is a video slot game coming from the rich Red Tiger Gaming portfolio. The slot has a classic fruit theme combined with a modern design and an innovative bonus feature. The slot has high symbol details and modern animations which give it an attractive look. Despite the lack of classic bonus feature Arcade Bomb can produce payouts of up to 1.000 x stake which is more than enough to give the slot a try for real play.

Arcade Bomb is a 20 pay line slot with 5 reels and 3 rows. Players can bet anywhere from $0.20 to $500 per spin, by using the arrows next to the Stake button. After you set the bet size you can easily use the Spin button or the Auto Play option.

The lowest payouts in the slot come from the fruit symbols Cherry, Lemon, Orange, Strawberry and Mellon. The medium payouts come from the Bar and Bell symbols, while the highest payout comes from the Seven symbol. The game doesn’t have a wild or scatter symbols installed, but does have four different Bomb symbols.

Arcade Bomb is one of the many Red Tiger Gaming slots which this provider has to offer. Their games are constantly growing in popularity thanks to the innovative bonus features and attractive design. The Red Tiger Gaming slots can be found in many online casinos, especially in those focused on the Asian market.

All of the game symbols in Arcade Bomb can land stacked on the reels except for the Bomb symbols. Winning combinations are formed among three or more adjacent symbols regardless of the starting position. This means that winning combinations can start on any reel on the screen. The Bomb symbols can land on any reel and can come as a Blue, Yellow, Green or Purple bomb. Each bomb symbol will come with a number on it which will decrease by one in each passing spin. When the counter on the bomb reaches 0 the bomb will explode. The Blue bomb explodes horizontally; the Yellow bomb explodes vertically, the Green one horizontally and vertically, while the Purple one explodes diagonally. Once a bomb explodes it will award a random matching symbol within its radius blast. You can get several bombs on the screen and if any other bomb is caught in the blast it will award the same matching symbols as the bomb triggering the explosion. This means that you can easily get many matching symbols on the reels or even a full screen of identical symbols when the bombs explode. 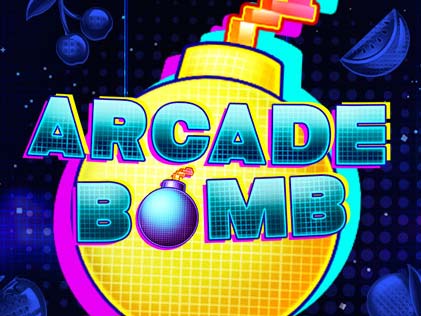 Arcade Bomb is an interesting slot game which is very fun to play. The game has a classic fruit theme with an added modern twist and very interesting features. Even though the game doesn’t have a classic free spins bonus the exploding bombs can produce nice payouts ranging even up to 1.000 x stake. This is reason enough to give Arcade Bomb a try for real play across any of our recommended Red Tiger Gaming casinos.