Launched on 22nd May, 2018 Asgard is a 5 reel slot game from Real Time Gaming. The game is based on Viking theme and is going to take you back to the era of Nordic gods, who themselves appear on the reels to bestow you with some generous winnings.

Reels of the game are set in the outer space and you get to see the glimpses of a galaxy from the window of the plane as the gods travel to Valhalla hall, where all the Norse gods go after death and are deemed to be fit to reside with Odin! Perfectly rendered blue hue and the twinkling stars in the background give a surreal feel to the game, making the game play even more fun.

This slot machine is going to give you plenty of chances to win as it is has 243 pay lines and is packed with a number of bonus features like Thunder Bolt, Goddess feature, Loki's Magic, Thunder God and the ultimate Valhalla feature. Every feature can be activated only after you have triggered these features a certain number of times and are going to keep you on a look out to unlock them as the game play continues.

Each of these feature is associated with one Norse god and can only be activated once you have triggered a specific number of Free Games; which is going to keep you engrossed in the game play once you start spinning the reels of this game.

5 reels of this online slot game are set in the outer space as you get to have a look at the Nordic gods from the window of the ship that take you to the Valhalla Hall. Background of the reels consists of some symbols of the viking era and glimpses of stars, planets and other astronomical objects. A brilliant use of color blue color makes this view even more breathtaking which is accompanied by the sounds of thunder and swords in the background. Symbols used include some Nordic gods like Odin, Freya, Loki, Thor, the mjolnir hammer and a symbol with the view of Asgard empire. The 12 card symbols that act as standard symbols have been given a plain grey color that makes them appear antique yet real at the same time.

Whenever a feature is activated a thunder covers the entire reels preparing you for the riches and the background of the games changes color that makes the games play even more thrilling; which keeps on becoming more engrossing as you go on spinning the reels of the game.

Along with these, a bar at the extreme right hand side saying Help and Rules has also been provided which lets you have a look at the pay table at the basics of the game whenever you need.

The standard symbols used in the game have been artistically chosen and are completely in sync with the theme of the game. These include a symbol with the image of Asgardian empire, god of thunder(Thor), his mljonr hammer, Loki, Goddess (Freya ) and Odin. The gods embrace traditional attires including capes, golden belts and crowns. Each of these symbols are associated with their respective bonus features and bring more winnings for you being the high paying symbols.

Along with the symbols depicting viking era, some symbols from the deck of cards have also been used, they include a mix of number and alphabets like A, K, Q, 10, J, and 9. These low paying symbols are grey in color and serve the dual purpose of adding simplicity and appeal to the game play.

The Wild symbol used in the game is very easy to recognize and comes with the word 'WILD' written on it in with Golden alphabets against red background. It has golden ornates and brings out the theme of the game really well. The wild symbol replaces all the symbols on the reels with an exception of the scatter symbol.

Just like the wild symbol, the scatter symbol is also easy to identify. It comes with the word BONUS inscribed on it in silver alphabets. The blue background and the silver decoration around it adds to the appeal of the game. Three Scatter Symbols anywhere on the reels activate one of the bonus features.

This online slot by Real Time Gaming comes with a number of chances to win. There are five bonus features in the game which are activated whenever three scatter symbols land anywhere on the reels of the game. Each of these bonus features are associated with a Nordic god and can be consecutively unlocked after you have triggered a required number of Free games.

This feature can be activated right from the first time you get three scatter symbols on the reels and awards you 15 Free Games. The moment you choose this feature, the background turns pink and all your wins are tripled as Freya takes the charge. You can re-trigger this feature as many times as you want.

After you have triggered the Goddess feature at least 5 times you can unlock this feature which is marked by a change in the background to green. The prince of Asgard, Loki brings for you 20 Free Games which have additional wilds which are green in color and appear on reel 3.

You can also win extra spins if two or more scatter symbols appear on the reels while this feature is activated. 2,3,4, or 5 bonus symbols will get you 1, 2, 3 or 4 Free games respectively.

Thor who is considered the God of thunder brings 25 Free games with multipliers in this feature. It can be unlocked only after you have triggered the bonus feature 10 times. 2X and 3x multipliers randomly replace the symbols on the reels which are cumulatively paid out.

This is the last features which is activated after you have triggered the feature 15 times. In this Odin brings for you 30 Free games with morphing symbols that continue to morph until no winning combination appears on the reels.

A multiplier which starts from 2x on the first morph continues to build up until the morphing continues. Pays are paid out after each morph of the symbols from the same original spin.

This video slot is developed By Real Time Gaming which is one of the leading software of the online gaming world. Established in 1998, this software brand has vowed to take gaming seriously, which truly reflects from the quality of games it provides. With more than 300 games online, RTG claims to release new games every month and this one is another masterpiece by them.

Asgard, is a 5 reel – 3 row online slot by RTG which has 243 paylines. The game is based on Viking theme and is packed with a number of bonus features that help you get some massive wins by your side as you play with the Nordic gods. The high quality of the graphics of the game and the numerous bonus features are bound to bring some massive wins for you once you start the game play. 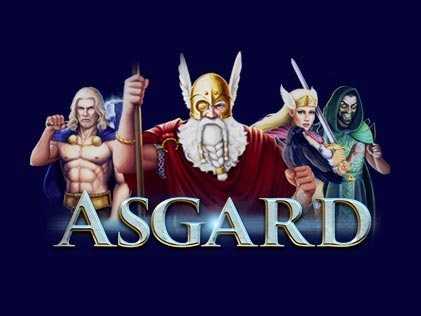 The 5 – reels and three rows of this video slot are set in the outer cosmic space and lets you enjoy the glimpses of astronomical objects like stars and galaxies with a heavenly blue hue in the background. Norse gods like Odin, Freya, Loki, Thor and the wild & scatter symbols appear on the reels time and again along with a chance to unlock one of the five features that lead you to riches and boost up your winning possibilities. These feature include Goddess Feature, Loki's Magic, Thunder God and Valhalla which can be activated after 5 triggers each. This games based on Viking theme brings massive wins with Free games and multipliers that can be unlocked after specific number of triggers of the bonus faetures. The game play keeps getting more exciting as you trigger more and more features and are not going to let you take your eyes off the reels as you wait to unlock the next feature!

So, Get ready to escape to the Viking era and get your hands on some massive wins with the exciting bonus features of this game by Real Time Gaming.