Roam in to the darkest and wildest recesses of the forest with the protection of all the great beasts of the jungle in Playtech’s latest slot game - ‘Big Bear’. The majestic beauty of the nature rolls in the otters, fishes, lynxes, the great wolf and the Wild Bear. The Eagle being a trust worthy companion giving out the highest payout among all the standard reel symbols.

With Wild Symbols and Scatters to offer big wins and the possibility of a huge jackpot lurking in your way, other playing card symbols like A, K,Q or J etc. start to become a valuable part in your journey as well. In addition, there are bonus rounds with ‘Free Games Feature’ and ‘Hold and Extra Spin Features’ maximizing the pay out to a multiplier of ‘36x’.

This 5 reels and 3 rows online slots game allows a total of 243 bet ways or pay lines to win with for a player. The stakes or bets begin from 10 p to €500 per spin with the maximum win being a 20,000 coins pay out. Lastly, the Wild Multipliers, free spins and free games are just the added bonus you might need while recuperating from all the crazy fun.

Read this unbiased review to know about the all the free spins and free games ‘Big Bear Slot’ has to offer. Play for free in the ‘Free Demo Mode’ version given below or the choose an online casino that suits your needs the best :

How to Play the Big Bear Slot ?

To enjoy this Playtech Powered Slot Game, read the instructions given below :

Big Bear Slots Game by Playtech provides you with 243 bet lines or pay lines to win.

With a dark and dense forest as the background, ‘Big Bear Slot’ is an unfurling mystery with big animals like The Wild Bear, The Untamed Wolf, The Watchful Eagle and the Stealthy Lynx guarding it. Bound by the nature, the otters or beavers and the fish keeps the illusion of the jungle intact. The grizzly bear acts as the Wild Symbol where as the a ‘Bear-Paw wielding Drum’ acts as a Scatter Symbol. The sound effects and the background music by this Playtech invention is astounding as well as captivating. So, place your stake to play for real money and get ready for a wild journey with this slot game.

A player must choose the ‘Free Games Feature’ with the Hold and Extra Spin Feature. Then, the appearance of 3 or more scatter symbols on the slot reel will activate the free games or free play. Once activated, a player can choose from 3 of the Free Game Feature Options given below :

The Bonus Games Feature can be re- triggered multiple number of times during the Free Games. The credits bet will be the same as the game that triggered the feature.

Wile playing the Free games, whenever a ‘Wild Symbol’ appears, that particular slot reel is held and one extra spin is awarded on one of the other reels. During that time, if a feature is selected then the Free Spins Multiplier comes in to play. It is based upon the features as such :

An amazing plus point of the ‘Big Bear Slot’ is that the you don’t have to count the maximum or the minimum pay out. The slot game itself does that for you. All you have to do is select your bet and the maximum win will be displayed to you. Therefore, the ‘Pay Out Table’ above represents the minimum payout x the chosen bet amount (in this particular case the chosen bet amount is €0.10). 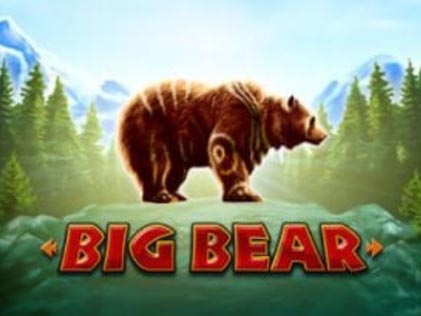 ‘Big Bear’ Video Slot is a 5 Reels and 3 Rows slots game by the software provider ‘Playtech’. The game takes you in the wilderness of American Forests with the Big Alpha Bear and the Fierce Wolf, the fishes, the lynxes and the highest paying reel symbol - the Eagle. The stakes start from €0.10 and goes up to €500.00. Moreover, gracing the game with big wins and jackpots are the ‘Free Games Feature’ and the ‘Hold and Extra Spin Feature’, giving out free spins and introducing ‘Wild Multipliers’ in to the game shooting up the payout to a ‘36x multiplier’. In addition, the Wild Symbol triggers the Free Games where as the Scatter Symbol keeps the fun going. The RTP of the slot is calculated to be about 95.48% with a medium to high level variance. The game has a total of 243 different bet ways and provides you with enough chances that you can ensure a big pay out when done. So, pack your bags for this action filled jungle crazy slot ‘Big Bear’ and try not to let the wolves eat you alive.