It’s been some time since we’ve had a chance to see a new video slot game being released by Playson. Well they finally broke their dry streak and recently released Clover Tales. The game has a Leprechaun theme which is very popular in the online gambling industry. Probably every online software provider has at least one video slot game which has an Irish theme. The slot has a simple 9 pay line design, but also a potential for big payouts and attractive bonus rounds.

In terms of visual effects Clover Tales doesn’t have much to offer. The animations are on a medium level and the overall game design is simple. Still the symbols are well designed and the background music flows perfectly with the game theme.

Clover Tales doesn’t have a classic bonus round. During each spin in the game one pay line will be turned to a Rainbow pay line. Once a winning combination is formed across this pay line with a wild symbol involved either a free re-spin is awarded or a free spins bonus. During base play the wild can land only on reels 2, 3 and 4 and will expand to cover the entire reel each time the wild lands on the Rainbow line. 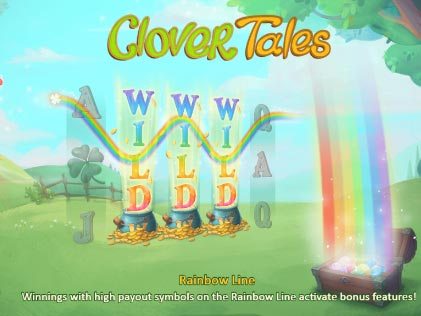 Playson may not have a big influence in the online gambling market but they managed to pleasantly surprise us with their latest video slot game. They managed to create a fun video slot game with a very original set of bonus features. The free spins bonus and the re-spins have the potential for big payouts especially if they are triggered with 5 of a kind wins. This way players have a chance to get 5 of a kind Wild payouts which is the highest paying symbol in the game. All you need is some of the luck of the Irish to win big on the reels of Clover Tales.