Join the Spanish Conquistadores in their adventure across the American continent to grab some great wins with this online slot!

Just like its name, the theme of this online slot game is quite unique and focuses on the journey of the Spanish leaders across America and their attempt to conquest it. The word 'Conquistadores' literally means a conqueror (especially Spanish) around which the theme of the game revolves. So get ready to march across the American lands which were quite unexplored at that time and join the Spanish soldiers in their expedition. Capecod gaming (now a part of Novomatic gaming) has given their best in this slot game which can be seen in the form of amazing graphics that you get to relish. This online slot machine is quite a rare gem as the retro look of the game is accompanied by some to interesting bonus features and huge winning possibilities! So, read below to know more about this online slot game before you try it for real at online casinos.

How to Play Conquistadores Slot?

Once you launch the slot game, you will be able to see its 5 reels – 3 row and a few buttons on the screen. You can use these to select the amount that you want to stake and start spinning the reels of the game. Check out below to know more about them to be able to play this 25 payline online slot game with ease.

Coin Per Line: This is the first button on the bottom left-hand side. As the name suggests, it lets you choose the number of coins you want to bet per line. Use it to select any value between 1 to 10.

Max Bet: If you are feeling quite lucky and want to stake the maximum amount, this button will save you from the extra efforts. When you click on it, the bet will be set to the maximum value of 10 coins per line and a maximum of 250 without having to individually set the values.

Spin: This button looks like red brick and lets you spin the reels of the game to enjoy the gameplay when you click on it.

Auto Play: Use this button to spin the reels automatically any number of times that you want varying between 5, 10, 50, 10 and 500.

Coin Value: This is the last option to the left-hand side and helps you set any value between 0.10 to 0.10. That you want to stake.

Thanks to its popularity, you can enjoy this video slot game at some of the leading online casinos. All you have to do is sign up at any of them and navigate to the gaming lobby to launch this game. Some of these casinos include well-renowned names of the online gaming world like Mr. Green Casino and Billion casino which are also the partners of this gaming software brand. Further, if you are lucky enough, you may also get a chance to claim some exciting bonuses or even no deposit bonuses to play this game online for free!

Once you launch this game, you will be taken back to the era of Spanish conquest with its retro theme and outstanding graphics. Capecod has loaded this game with the beautifully designed symbols and an amazing Free Spins bonus round. The reels of the game have been placed in the forests and you can see a statue to the right of the reel which resembles the face of a soldier and is placed right next to the stairs, perhaps leading to the forests. On the left-hand side, you will be able to see an archaic wall. There are shrubs and bushes hanging on the stone-like boundaries of this online slot which makes it look like and an entrance to a cave. A glimpse of a densely covered forest and a part of the sky covered in a haze are bound to leave you mesmerized as you starting playing the game.

this slot game will make you revisit the era of Spanish conquest and the symbols used in the game are going to add a real appeal to the gameplay. The symbols used in the game seem to be straight out the ancient era and a Spanish soldier who is fully armed and seems to be on his way to the conquest is the highest paying symbols. Along with this you also get to see some other symbols that consist of the things commonly associated with the war. These include a pirate ship, compass, knife and a flaming torch. These symbols have been given a 3D look and are enclosed within golden frames adding a royal appeal to them.

The low paying symbols that you will get to see on the reels of this game include the symbols that can be seen in playing cards. These consist of A, J, K and Q. These frequently appear on the reels and keep the gameplay real. Further, they have been beautifully carved out and add to the appeal of the gameplay. You will see a grove of gold running through the mid of each of these within the unique designed assigned to each of these which add to their beauty.

This online slot brings extra chances to win for the players as it has not just one but two wild symbols. These wild symbols replace all the symbols except the scatter symbols to bring higher wins for you. Further, The map symbol is also an expanding wild that covers up to 4 spaces on the reels which themselves act as wild symbols.

The golden cube is the scatter symbol used in the gameplay which triggers the Free Spins bonus round. When you land 5 of these on the reels of the game, it unlocks to reveal a special symbol which acts as both wild and itself for the Free Spins.

This slot game also has a Free Spins bonus round which is triggered when you land 5 scatter symbols on the reels of the game. It starts when you land 5 cube symbols on the reels which then reveals the special symbol. This can be any symbol that constituted the gameplay in the base game. It then generates more wins for you as the special symbols pays both its normal contribution and as a scatter symbol. Further, the Free Spins can re-triggered and more of these will be awarded if the emerald symbol appears on the reels of the game which will continue until none of it appears on the reels.

This 5 reel –3-row online slot game is a masterpiece by Capecod gaming which has developed some high-quality online video slots as well. Making it interesting, Capecod, situated in the US, was the first place to receive the first-ever radio signal. This software brand sharing the same name has kept the legacy to initiate the good things going, and has been successfully winning the hearts of the players since being established in 1987.

Further, it was taken over by Novamatic gaming which has carved a niche for itself in the online gaming world and works in more than 50 countries catering to the needs of millions of online players. This itself reflects the gaming standards that Capecod gaming has to offer. This online slot game proves it yet again and is bound to keep you engrossed as you get to enjoy the gameplay and grab some big wins across its 25 pay lines. So gear up to make some great quests as you accompany the Conquistadores on their journey with this online slot game! 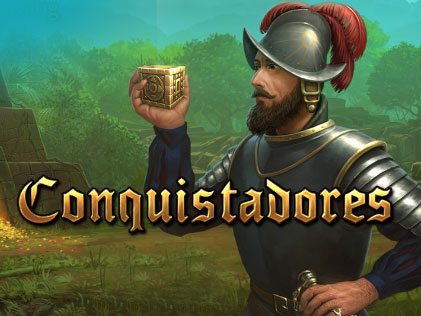 Conquistadores is an interesting online slot by Capecod gaming. This game has been packed with high-quality graphics and abundant chances to win. It is a 5 reel 3-row online video slot machine which has 25 pay-lines which has a retro touch to it. Once you launch the game, you get to accompany the Spanish soldier in his adventure and scoop out some big wins on the way. To add more to the fun, you can also unlock the Free Spins if you get land 5 golden cubes on the reels of the games. Further, this slot game also brings decent chances to win, making it worth giving a try at your favorite online casinos!