Try to pick up the big win with Dragon Slot Jackpot from Leander & read our review of it first!

Dragons have been the subject of many an online slot game already. And why not? Their mythical, legendary status as ferocious, fire-breathing beasts make for a great theme. Dragon Slot Jackpot from Leander Games brings that theme to life even more. You only need to look at the imagery on display in the background, which depicts a castle from medieval times, to know that you’re in for a treat with this one. There’s also a very appealing piece of soundtrack music playing in the background while you spin. This further sets the scene. As a valiant knight, you’ll need to fend off any sort of attack from the vicious dragons on the reels. Fortunately, you’ll have a bit of help from the collection of special features that the game incorporates. And you’ll get to see all of this unfold with some high-quality graphics and animations. So, if you’re ready to go into battle against the dragons, lead on!

The standard design of this slot provides you with a total of five reels and three rows. Therefore, it sticks to a generic and familiar layout. As well as this, you’ll find that there are 20 separate pay lines available for you to play wagers on. However, you do have the option of customising these by using the relevant up and down arrows at the bottom of the screen. As we said earlier, the graphics that this slot game integrates are very appealing. As well as the medieval background, the reels play host to some intriguing icons, which we’ll look into a little bit later.

Furthermore, in this slot you do have the option of customising your wager, which is done by using the second set of up and down arrows. With these, you’re able to select a bet between $0.01 and $5 per active win line. This means that the maximum overall wager in this slot stands at $100 per spin. There’s also an autoplay feature for you to utilise, giving you the chance to set the reels off spinning up to 100 consecutive times at the same wager level.

Leander Games is the developer that brings forth this online slot offering. This company has been in operation since 2008 and has been providing stylish and polished games ever since. Basing itself originally out of Buenos Aires, the company has made connections with many major casinos to expand its business already.

You won’t only get a standard base game with Dragon Slot Jackpot either. There are some intriguing specialities in the slot too. 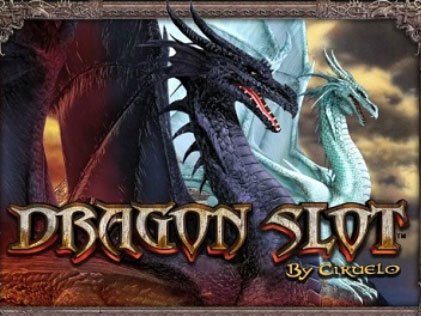 We’re not entirely sure why this game is known as Dragon Slot Jackpot, when it doesn’t actually contain a jackpot for you to win. However, that aside, you do have the chance to play a truly thrilling game on the whole. The graphics and gameplay in this slot are very appealing and it features some impressive special features to enjoy as well. Overall, it will provide you with an entertaining and exciting slot game.