Learn how to grow Santa fat this Christmas for some bonus games and free spins!

Feeding Santa with some Christmas pies as a medium of bribe for some higher gifts and goodies is never a bad idea because Christmas is just round the corner! Executing the same ideology, Push Gaming presents you with a 5 reel, 5 row and 50 payline Slots machine titled Fat Santa Slot. In order to relish some scrumptious free games and bonus spins while turning the reels of this Slot game, feed as much Wild Christmas Pies as you can to Santa as the more he eats, the more he grows rewarding you with free spins and free game rounds. Later in the article you can learn about this Slot game's symbols, graphics, payouts and various bonus features but before that try its demo mode below to learn how to play Fat Santa Slot for real money without really risking your bankroll.

All the incomplete games will be automatically resolved after 2 days and if any winnings are generated from the automatic resolve then it shall be paid to the player's account.

Set amidst snow-capped mountains, cabins and trees, the wintry backdrop of Fat Santa Slot perfectly brings out the seasonal theme of this machine. The colourful symbols like jingle bells, snowman, Santa's elf and moose blend in with the theme reasonably well. Furthermore, the randomly triggered Santa's sleigh adds on to the festivity of the joyous Christmas. The jingling sound when reels of this Slots machine are turning and the gobbling sound when the Fat Santa gorges on the scrumptious Christmas pies create perfect background music which compliments the theme effectively.

Fat Santa Slots game is powered by Push Gaming; yes the game studio which introduced Fat Rabbit Slot to the industry. Having established that, we must say that the year 2018 has been a remarkable year for budding online gaming software technologies which have outlived the major competitors by introducing a number of exciting Slots that created a buzz in the Slotting community after every release. Looking forward to the same response, Push Gaming has left no stone unturned on the launch of Fat Santa Slot.

Where to play Fat Santa Slot? 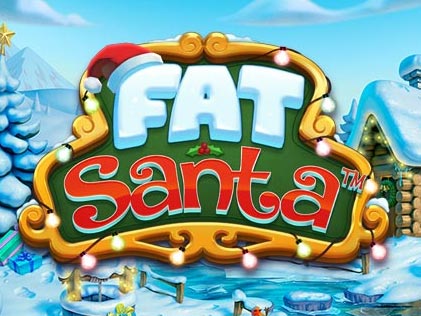 Almost a 100% clone of Fat Rabbit Slot, Fat Santa is a great addition to the existing list of Christmas-themed Slots games. Being powered by Push Gaming, Fat Santa exhibits some spectacular animations and graphics, which purely brings out the Christmas festival. It is a medium variance Slot machine with RTP equivalent to 96.45%. With win potential up to 6,405 times the stake, this Slots machine is surely going to give away some pleasant surprises this festive season. May you have a Merry Christmas with wins making you merrier!