Join the Day of the Dead festival by spinning the reels of this online slot game by Playtech!

Based on the Mexican festival 'Day of the Dead', this 5 reel-3 row video slot by game by Playtech is bound to take you to the Mexican streets. Contrary to what it literally means 'Feast of the Dead', this slot game is full of vibrant colors and has a lot of fun to offer. The symbols that you will see on the reels of the game include the ghosts of some ghastly figures like the barmaid, sheriff, cook, singer and a farmer. These spooky figures have been vibrantly colored and keep the gameplay fun in spite of being based on a horror theme. Along with this, a number of interesting bonus features like the mariachi wheel, altar bonus and the festive free games have also been added to the game which are going to make sure you return home with a bag full of bonus funds after enjoying this Mexican feast!

Playtech has kept it simple with this online slot which makes it a good choice for both the new and experienced players. If you want to enjoy this game, all you have to do is select the amount and the number of lines you want to bet on and spin the reels to find out what the fortune brings for you. Use the following buttons to enjoy the gameplay -

Lines: It is the first button on the extreme left hand side at the bottom and lets you choose the number of lines you want to bet upon by using the + and – options below it. You can choose any value between 1 – 20.

Bet: Use this button to choose the amount that you want to bet. The maximum and the minimum bet that you can stake are capped at €0.25 and €0.01 respectively.

Autoplay: If you like to sit back and relax while enjoying the gamplay, without having to press the spin button again and again, his option lets you do so. You can choose the number of times between 10 to 100 for which you want to spin the reels by themselves.

Turbo Mode: The players who like to play fast, this is the option for you. On using this feature the reels spin relatively faster and the winnings screen are skipped so that you can focus on the next spin!

Spin: Clicking on this spins the reels of the game and initiates the gameplay.

The reels of this slot game are situated on the roads of a Mexican town with beautifully colored homes on either side. The street is decorated with Mexican Picado banners stretching across the sky of these streets. Reels appear to be kept in the middle of the street with the word Fiesta de la Memoria is written on the top of them. They are outlined with bones on the boders and skulls on all the four corners. The outlining frame of the slot and the background of the reels is purple in color which serves the dual purpose of giving the game spooky yet a vibrant feel. Soothing vibrant music is played in the background during the entire the gameplay making it more enjoyable.

Mariachi is a pleasant traditional Mexican folk music that is amusing just like this feature. This bonus feature is activated when you land three or more scatter symbols on the reels of the game. The onset of this feature is announced by a humanoid skull that appears on the screen which is mounted on the center of a rainbow-colored wheel.

The Mariachi wheel has a humanoid skull at the center of it and the multipliers are written on all of its radii in rainbow colors. The wheel stops randomly by itself, the multiplier towards which it is pointing is awarded to the players. The more scatter symbols on that trigger this bonus, the bigger multipliers you get. The payout that you get from this feature is multiplied by your original bet.

When you land three or more bonus symbols on the reels of the game, the Altar bonus is triggered. This bonus game consists of 6 levels. In each of these levels, you have to select an object which will reveal a cash prize. But hey! Be careful! If you choose the collect symbols, it awards a cash bonus but may end the altar bonus. And if you are lucky enough to make it through all the 6 levels, you may get an extra cash prize. The more bonus symbols on the reels of the game triggering the bonus, the bigger the cash prize that you win!

This online slot game also consists of a festival of Free games feature which is triggered when you get the 'Free game' symbols on the 1, 2 or 3rd reel and brings 12 Free games for the players. This bonus game consists of three different skull symbols each of which reveals a different number of Free game when they appear on the reels. However, you might not be able to see the special symbols like the scatter and bonus symbol since in this round it itself comes with a number of chances to win.

There are three types of skulls in this bonus game -

This amazing slot game has been designed by Playtech which is one of the giants in the online gambling world. Founded in 1996, this software brand has been tremendously growing since then and has expanded its base to 17 countries serving more than a million satisfied players. The quality of their work reflects from its huge customer base and the fact that it has been listed in the London Stock Exchange and has a dozen awards to its credit.

Playtech believes in keeping the players at the forefront of their innovation and this slot game showcases their another successful attempt to win the hearts of its players. Based on the Mexican festival of Day of the dead and loaded with a number of bonus features like the Mariachi Wheel, the Altar bonus and the Free games, this online slot machine is definitely going to be a pleasant surprise for the players. 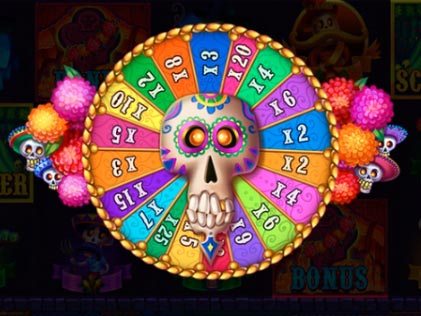 This online slot by Playtech is based on the Mexican festival where the dead are taken out from their graves, dressed up and are walked around the city. If that sounds scary to you and sends chills down your spine, don't worry, unlike what you might be imagining, this slot game is full of vibrant colors and is going to be fun to play with. Apart from the theme (which is dark and horror), the game does have a lot of glamour. Along with a number of high-quality graphics, this game is also full of a number of thrilling bonus features like the Altar bonus, Mariachi bonus wheel that are going to add to the fun while you spin the reels of this online slot game.