Get ready to enjoy the modern look of classic fruit slots with this online game by Red Tiger gaming!

This online slot game has been developed by Red Tiger Gaming with the use of Power reels mechanics and is a fine blend of classic slot games and the new features seen in the latest online slots for the players. The moment, you launch the game, you will be able to perceive that this slot game is quite unique from its 8 reels and 5 rows grid. The game does not unfold any complex gameplay or bonus features but does bring some amazing chances to win with its features like instant win and repeat spin. While the instant spin is activated when you land the 'Five Star' symbol on the reels of the game, the repeat spin feature can get activated on any spin. So start spinning the reels of this slot to relish this gameplay but before that, read below to know more about it.

Red Tiger Gaming has made the gameplay of this online slot very simple and all that you will have to do is select the amount that you want to stake and start spinning the reels of this game. However, you will have to use a few options to be able to enjoy the gameplay. These have been briefly explained below.

Stake/Bet: This is the first button to the extreme left-hand side. Click on this to select any value between £0.20 to £40 that you want to stake.

Spin: This is the first button to the right-hand side. Click on this to spin the reels of the game.

This fruit slot machine game by Red Tiger Gaming consists of the use of vibrant colors that are going to be a pleasant sight for the players. A glimpse of the slot game may make it look like a classic slot game at first, but it will be a thrill to enjoy as you get to try your luck with 8 reels and 5 rows of the game. The reels of the game are transparent and spin against a red background. Further, these have been placed in well-defined frames that give a retro look to this slot game. Symbols used in the game are simple and consist of what you will be able to see in any slot game; Fruits. The background music has been carefully chosen and blends in with the theme of the game really well.

The symbols used in the game consists of fruits symbols that have been brightly colored and the number 7 which is the highest paying symbol used in the game. The fruits symbols that have been used consists of watermelon, grapes, Eggplant, orange, Lemon, and Cherry. These symbols generate wins whenever 8 of them form a winning combination according to the paylines.

Red Tiger Gaming has kept the gameplay simple and you won't be able to see any specific wild or scatter symbol on the reels, but it does have a five star symbol which acts as both and brings along massive win for you. However, the win is only paid to you if you land atleast 3 of these symbols on the reels of the game.

Depending on whether you get 3, 4 or 5 of these on the reels you will be paid:

Not only this, if you are lucky enough, you may even be given a repeat spin on the last spin with these five start symbols on it which may bring additional wins for you.

Although, this game does not have any bonus round, yet it does bring fair chances for you to win in the base game itself. It presents two exclusive features that are going to guarantee you some amazing wins as you spin the reels of this slot game. These have been briefly explained below.

This feature is randomly activated and gives a chance to generate some massive wins. Once activated, this feature will repeat the spin, in which it is activated which means, the wins that you generate, will be added to your account once again. Further, every spin comes with a possibility to activate this feature, which brings unlimited winning opportunities for you.

Once you start spinning the reels of this online slot, keep a watch on each and every spin since any one out of these can turn into a winning opportunity for you. With this feature, whenever you land Five Star symbol on the reels, it brings along generous win for you. These include:

This slot game has been powered by Red Tiger gaming, which is one of the well-known names in the online gaming world. It has expanded tremendously after being launched in 2014 and has gained a reputation for producing high-quality slot and table games for the players. With this online slot, it has brought some exclusive features for the players like Repeat Spin and the Five star feature. Further, the pay table of this game is very simple and consists just of 5 paylines with each combination of 8 same symbols generating wins for you, thus guaranteeing fun for you with each spin. 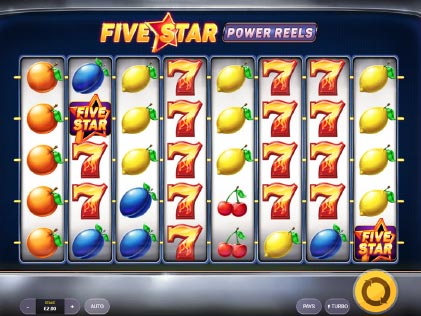 Five Stars Power Reels slot game is going to be a treat for the players as it may appear to be a retro classic fruit slot game at first sight but has been made advanced and more interesting with its 8 reel – 5- row look. Red Tiger gaming has managed to keep it simple with this online slot game when it comes to the gameplay. Likewise, the pay table is also simple and consists just of 5 paylines but has the potential to generate some amazing wins if you are lucky enough. The symbols used in the games consist of the fruits that add to its simplicity and fun. Although, the game does not have a bonus round, but the base game does have some features like respin and five star instant win which may bring additional wins for you. So, Keep spinning the reels to scoop out some big wins each time 8 of these appear on the reels.