Dare to play With Flames to Get a Handful of Bonuses

Flame is a fuming hot video slot by NextGen gaming which was released recently on 11th April this year, in 2018. With this 5 reel - 3 row – 20 payline video slot, NextGen challenges all the online players to play with the fire flames embedded on the reels and the math engine in its core to emerge with a cluster bonuses by their side. Like all the NextGen games, this online video slot game comes with superior graphics. The software brand has beautified the entire idea of fire and flames by toggling the color of flames from the standard yellow, orange and red color to a purple and blue hue. The colors of the symbols that include animals like lion, eagle, wolf; the five elements of earth viz fire, earth, water and air have been perfectly chosen and make them vividly stand against the dim background. You will also see some symbols out of the deck of the card and a beautiful fire lady which is the wild symbol and whose presence is going to bestow you with some massive wins.

The game is going to bring ample of chances for you to win since it is packed with 7 mini bonus features like – Flare up, cross flare, Fire whirl, Live Embers, Spontaneous combustion, Wild inferno, Firestorm some Free Spins and other bonuses.

So get ready to jump into the fire, play with the flames without the fear of being reduced to ashes and take away some massive wins as you play with online video slot machine.

As the name suggests, this 5 reel – 3 row video slot is based on Fire theme. The reels of this hot online slot are literally set on fire, but not the kind of fire you often see – red and raging. The flames that you will come across are in blue and purple color that gives out soothing vibes. Time and again, the flames do fume up in yellow color but only to leave you with plenty of bonuses. Reels are transparent and the beautifully designed symbols in bright colors spin over the reels with soothing flames at the bottom which gives an elegant look and feel to the game. The music used in the game does wonders and adds more fun to the game play. This slot game also gives you an option to select the placement of the spin button – bottom left or bottom right and the quality of the effects – good, better or best which adds more to the appeal of the game.

The symbols used in this online slot have been beautifully designed and include some animals like lion, a wolf and an eagle. You also get to see some symbols corresponding to the elements like earth (green leaf), water(blue water droplet), fire(burning fire) and air(lighting) . Some symbols out of the deck of the cards are also placed on the reels of the game which add more fun to the game play and some extra winnings to your bank account.

Flames video slot is packed with a number of bonuses, Free Spins and some exciting features. However, the features that are going to add some major winnings to your account are the 7 mini features as they triggered quite a number of times.

The mini feature are randomly activated in the base game itself and bring increased winnings for you.

These are randomly activated during the game play and may even appear during the Free game and help you win even bigger, they include -

This feature is randomly activated at the end of Spin. With this feature, 5 of a kind symbols are paid in both the directions with the payout begins from the extreme left hand side.

With this feature; all the heart, diamond, club and spade symbols become wild on 2 reel, 3 reel, or 4. The reel on which the symbols are replaced is randomly chosen and the wins are paid only after all the symbols have been replaced.

After this feature is activated, all the applicable wins are paid and 1 re-spin is added for each wild symbol that appears on the reels.1 more re-spin will be added for every wild symbol on the screen when you spin the reels again.

All the symbols present on the reels 2, 3 and 4 become a combined wild bonus for the current reel spin and substitutes all the other symbols.

When three Bonus symbols appear on the reels, 15 free games are triggered. These Free games can be re-triggered within a Free game and help you win as much as 30 Free games or even more!

Flame is developed by NextGen gaming and follows their legacy of pushing the envelope for the best. The slot is bound to take your heart away with its enriched graphics, even though you'll be literally playing with fire. This 5 reel – 3 row video slot will make you fall in love with the ferocious flames as every time they rise they activate a mini-bonus feature for you!

NextGen gaming has been in the gaming industry for about two decades since 1999. The software is a part of SG digital which itself is a part of Scientific games which itself is a renowned name of the online gaming industry. The software brand strives to create games that attract, entertain and retain the players which truly reflects in the games they create. 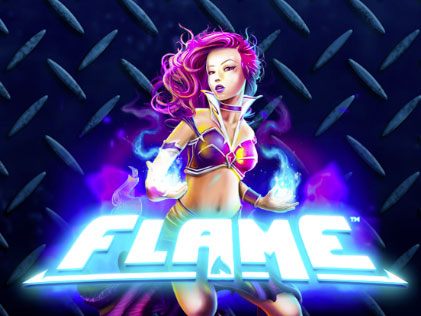 Flame is a 5 reel – 3 row video slot with 20 paylines from NextGen gaming. This video slot, as the name suggests is based on fire theme and is bound to make you fall in love with the Fire and flames keeping aside the fear of being reduced to ashes. NextGen gaming has beautifully changed the standard colors of red, orange and yellow of a flame and have given it a blue and purple hue which gives an elegant feel to the game play. The symbols used in the game include some animals (wolf, eagle, lion); basic elements (earth, air, water, fire); some symbols out of the deck of cards and the wild symbol which is a Fire girl.

Every time the flames rise up you are going to feel happy rather than scared since they come with one of the seven mini bonus features - Flare up, cross flare, Fire whirl, Live Embers, Spontaneous combustion, Wild inferno, Firestorm and some Free Spins and bonuses that help you reach the gigantic max win of 7500 coins.