A Grimoire (said to be originated in the Old French) is a book filled with mystical spells and hidden secrets with its main theme being ‘Magic’ & ‘Mystery’. True to that principle, Golden Grimoire Slot is filled to the brim with Mystery Symbols, a Wild & a Scatter Symbol along with magic in the shape of Super Mega Wins that raises your stake win to a good 200x per spin.

Furthermore, Golden Grimoire is a low variance slot powered by ‘Net Entertainment’ with 5 reels, 3 rows and a total of 40 winning bet lines. The Mystery Symbol is the main feature that is represented by a Grimoire with a Question Mark on it, that appears on the slot reels and can transform in to random symbols that can spread across multiple reels if the random symbol is the same as the symbol on the leftmost reel of the same row or if it is the Wild Symbol itself. Then, there is a Free Spins Feature in the slot as well which can win you free spins along with featuring a Sticky Mystery Symbol that can win lead to multiple mega wins in the game.

There are medium and low win symbols that include multi- colored gems and living creatures like Snakes and Spiders and Moths (or Scarabs) along with hearts and spades, and diamonds and club symbols. To know more, please read this authentic review on Golden Grimoire to decide for yourself if this is the game you want to play for real money or free. Check out the free demo version if you are playing for fun and the list of casinos mentioned as well.

How to Play the Golden Grimoire Slot ?

There are a total of 40 pay lines/ win lines/ bet lines in Golden Grimoire Slot Game. They are depicted in the picture below: 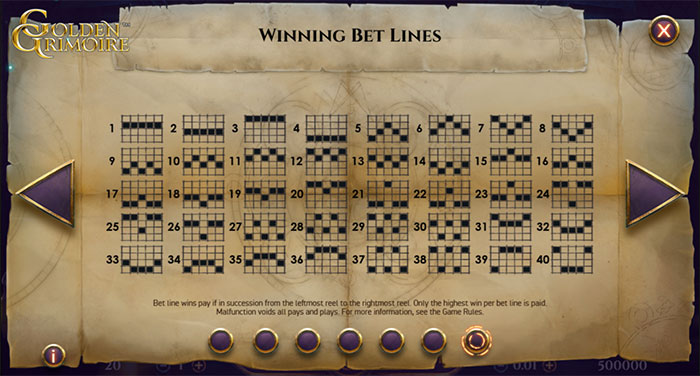 Walk in the world of magic and spells in this Golden Grimoire Slot game. The mysteries and magic is hidden in a room that is lit with candles and covered in books, a flower pot, a voodoo doll and a magic potion. Here, the walls are covered in luminescent ancient hieroglyphs and there is an open window from which the moon is casting a lambent glow everywhere.

In the beautiful starry night, when you start the game play, a mysterious music hums in the background with classical tunes that rides on a crescendo whenever you grab a win. Other than this, there are Mystery Book Symbols, Wild Substitution Symbols, Spiders, Snakes and many other miraculous effects in the game that takes you on an uncanny journey of hidden secrets and wonder.

Coins :‘Coins’ display the number of coins available in your account for you to wager. This value keeps changing with respect to the ‘Bet Level’ and ‘Coin Value’ selected by the player.

Coins Per Line :There are a total of 20 coins per bet line in this online slots game.

Spin : The ‘Spin’ button is located in the middle of the slot panel and is represented by two rotating golden arrows. You can press on it to start the game play. A player can also press the Space Bar on their chosen device to spin the reels of the game.

Auto Play :The ‘Autoplay’ icon is located at the left hand side of the ‘Spin’ button. It is also depicted by ‘AUTO’, which can be found on the corner left side of the slot panel. The range of the Auto Play Spins is from 10 to a maximum of 1000 Spins. In its ‘Advanced Settings’, a player can choose to select various options pertaining to when and if he/ she wants to stop the AutoPlay function.

Max Bet :This icon is located at the right hand side of the slot panel, next to the ‘Spin’ button. ‘Max Bet’ will set the ‘Level’ value at 10. However, the coin value will remain the same.

Wild Symbol : The ‘Wild Symbol’ is represented by a ‘Golden Skull’ and can only appear through the transformation of the Mystery Symbol on the slot reel. It can spread throughout the reels and substitutes for all the symbols in the slot game except for the Scatter and Mystery Symbol.

Scatter Symbol : The ‘Scatter Symbol’ is represented by a ‘Golden Keyhole’ with the word Scatter written in the centre of it. They can appear anywhere on the slot reels 1, 3 and 5 of the game and can activate the ‘Free Spins Feature’ of the video slot.

Standard Reel Symbols : There are 8 standard reel symbols apart from the Wild, Scatter and the Mystery Symbol in this game. Among these, the highest payout symbol is the Golden Spider encasing a Red Gem in its clutches and providing 100x your stake in coins when you land 5 on a payline.

Apart from that, there is a snake encasing a blue gem, some tentacles encasing a green gem and a scarab or a moth encasing a purple gem. As for the low payout symbols, they are represented by the four playing card symbols i.e. ‘The Heart, The Diamond, The Clubs Symbol and The Spades Symbol’.

‘Golden Grimoire’ is a video slot which is powered by the software manufacturer Net Entertainment, also known by the name of ‘NetEnt’. It is a leading software provider which primarily deals with video slot games. They strive to provides slots with a user friendly gaming interface and top notch graphics that does complete justice to each and every game launched by them.

Being the ones that developed one of the most popular slot game today namely ‘Starburst’, they also released many other master pieces like ‘Gonzo’s Quest, Twin Spin Slot, Reel Rush, Strolling Staxx, Finn and the Swirly Spin Slot and many more’. All of the games developed by them are compatible across all devices whether its your Mobile Phone ( iOS and Android both ), Tablet or your PC. Play on your favourite NetEnt Slots game and prepare yourself for your next big win.

The ‘Mystery Symbol’ is represented by a ‘Grimoire’ or in simple words - A Large Book with a Big Question Mark (?) in the centre of it. It can appear anywhere on the slot reels 3, 4 and 5 in the main or base game. Here, whenever one or more Mystery Symbols land on the reel, it turns in to a random symbol from the game. This random symbol can be anything between a Wild, Medium or Low win symbol. Then, all the Mystery Symbols collectively transform in to this symbol.

The ‘Free Spins Feature’ is activated or triggered when 3 Scatter Symbols appear on reels 1, 3 and 5 respectively in the base game. When that happens, it activates a total of 8 Free Spins. Once the free spins are activated, it leads to a special feature namely the ‘Sticky Mystery Symbol Feature’. 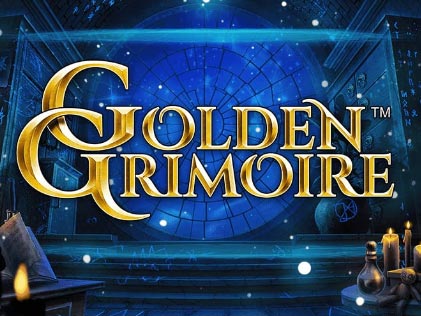 Open the Golden Grimoire Slot game window and rush in to the room filled with magic, ancient hieroglyph symbols and dim lit candles. This video slot has 5 reels, 3 rows and 40 paylines to win from. There are Magical Mystery Symbols that transform in to random slot symbols and Wilds that are shaped as a Golden Skull. There are snakes and spiders to keep you company and hearts and clubs to make the game interesting. The Keyhole Scatter can land on the reels and activate the ‘Free Spins Feature’, which can turn the game around with a unique ‘Sticky Mystery Symbol Feature’ that transforms in to random symbols or sticky wilds with each spin and can be the reason for a magnificent win. Spin the reels of this NetEnt powered slot game and win up to 200x your stake. The ‘Return To Player’ or RTP of this game is calculated to be 96.44%. It uses HTML5 Technology and is operable on all your devices including Smart phones, Desktop and a Tablet. So, if you are looking for a quick win, open this low variance slot game and start playing for real money and thus, with each click and spin, it will become clear to you that you are indeed in a world full of magic.