Before enjoying the re-imagining of this Great Blue Slot in its jackpot format, read our review!

If you’re familiar with the slot games that Playtech has launched, then you may have been privy to the Great Blue slot. The game takes you deep under the ocean’s waters, where a killer whale works as the main “character” of it. Well, recently, Playtech has launched a sort of connecting game to it, which is Great Blue Jackpot. It features very much of the same when it comes to theme and idea, but also incorporates, you guessed it, progressive jackpots as well. Four of them, in fact. However, you’ll also see that Playtech has chosen to utilise some impressive imagery throughout the game as well. The graphics are a step up from those in the original game. So, if you enjoyed the original incarnation of Great Blue, then this jackpot follow-up is sure to appeal to you too. Let’s find out more about its inbuilt features, shall we?

Accessing this Playtech slot will allow you to spin through a layout of five reels and three rows in total. Therefore, it maintains a very standard video slot interface for you to see. Alongside this setup, there are also 25 different bet lines for you to place bets on. However, these can go through customisation. So, if you want to reduce them, simply use the minus button underneath the ‘Lines’ box. Visually speaking, Great Blue Jackpot has some very impressive Playtech graphics on display for you to see. The background instantly takes you under the ocean’s waters, while the game’s icons show up on its five reels.

Further to all of this, you have the ability to change the value of the wager that you place per spin too. This is done by using the second set of plus and minus buttons at the bottom of the reel set. With these, you’re able to choose from a line bet of between $0.01 to $0.50. If you push this up to its highest level, your bet will stand at $12.50 per spin. There’s also the inclusion of an ‘Auto Play’ and a ‘Turbo Mode’ button.

Playtech is the developer behind this online slot game, which means that there’s a great team behind its creation. This company has been creating various different online gambling products for almost 20 years, making them one of the most popular developers in the world.

While you’re diving around under the water, you’ll want to take notice of some special features in this game. 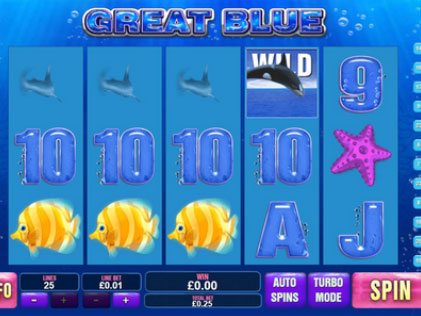 As big fans of the Great Blue game, we absolutely love the jackpot version of it. The jackpot game adds a bit more of a dimension to the slot that wasn’t there before. It’s a very thrilling and entertaining offering from Playtech, and with the inclusion of the free spins and wild icon, it grows in entertainment level as you play.