Accompany Heidi Hunt on her adventures and feel the thrill!

Overview of The Adventures of Heidi Hunt Slot

How exciting and fascinating would it be if you could accompany someone on a treasure hunt? All the childhood fantasies would flash right back once you come across this captivating online slot game 'Heidi Hunt' from software giant Magnet Gaming. Join Heidi on her action-packed adventure journey and immerse yourself as you make your way deep into the jungle. Heidi is an online slot game featuring nine reels with 2 progressive Jackpots. There are 8 active paylines that go horizontal, vertical and diagonal and 4 bonus games. Solve mysteries, steer clear through obstacles and wild rivers and be sure to stay safe.

Set against the jungle milieu with birds and crickets chirping in the background that also plays light music adds a little mystery to the game. Seeing Heidi clad in a cowgirl outfit provides a much required edge to the game and increases the adventure quotient. The temple positioned in the Jungle scenery sure makes for an interesting game play and infuses enthusiasm topped with thrill. Come on board with Heidi to solve the jungle's mysteries and hunt the temple treasures.

Heidi Hunt has an easy interface and is readily comprehensible and understandable.

It can be attained via 3x the River Wild symbols on the reels or through Game Chance. Under this Heidi, sails along the gushing watercourse and tries to collect as many coins as she can. If she proves to be lucky, then she might get hold of or find one or more Golden tablet that unlocks the Jackpot Flash. The game remains active for a total number of 10 spins. Extra 10 spins are given, if the game is won during an active game. During the course of the game, if the 'Left arrow', 'right arrow' and 'straight arrow' symbols appear then Heidi must row the boat in the same direction. The river has the following prizes to offer- Coin worth 40 credits and the golden tablets that open Jackpot Flash.

It is achieved through 3x the Temple Raider symbol on the reels or via the Game Chance. Stored in the chests are the Temple treasures that Heidi collects during the game and in order to open the Super Jackpot Flash, Heidi must find the special golden tablet. At the beginning of the game, 8 die rolls are awarded to the players. The players can move around with the help of the die rolls. An extra roll is awarded when you get a 6 on the die. The game ends when there are no die rolls left. The player can move just as many spaces as the number on the die. The player can choose which way to move the figure after every throw. In case the figure, crosses a chest- it shall open to reveal rewards. After a total of 10 chests have opened, the player will be awarded a Super Jackpot Flash. The remaining chests will be upgraded to diamonds and on successful collection of the diamonds another Super Jackpot Flash shall be awarded.

It is activated through 3x the Stone wall symbols on the reels or via Game Chance.

Treasures are hidden behind a wall in the temple and Heidi must look for them. If Heidi finds the stone that has a golden tablet hidden, a jackpot flash will be awarded. The player has to push the stones in order to reveal the prizes. 10 pushes are given at the beginning of the game. The game ends when there are no pushes left. There are 24 stones in totality, 15 of which are activated from the very start of the game. Behind every stone are hidden prizes.

It is activated through 3x Game Chance symbols on the reel.

Here, Heidi has a chance to win either the bonus games, Jackpot Flash or Super Jackpot Flash. After the button is pressed, a light starts flashing under all the 5 prizes being offered. After the flashing stops, a light remains lit under one of the 5 awards. The process continues until one award has three lights lit underneath it. The prize is awarded and the game ends.

The game instead of having scatter symbols has bonus games which have already been described above. Other than that the game consists of 2 progressive jackpots namely- Jackpot Flash and Super Jackpot flash, both of which can be achieved via different bonus games. The bet level determines the chances of winning a jackpot- higher the wager, higher are the chances to win a jackpot. 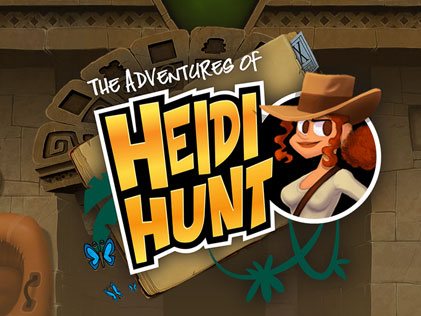 Get ready to go on an adventure journey with none other than Heidi Hunt, the famous adventurer and join her while she hunts for treasures in the Jungle's temple. This Magnet Gaming slot offers a massive 96.5% returns to the players irrespective of the bet level. Give Heidi Hunt a shot and enjoy the high quality 3D graphics and MED level variance. It is an HTML5 online slot which helps it to run seamlessly on both a desktop and a mobile device.

Top Casinos to Play The Adventures of Heidi Hunt Slot

Rate The Adventures of Heidi Hunt Slot & Write a Review