Meet the Ancient Gods & Goddesses with Legacy of Egypt Slot!

Overview of Legacy of Egypt

Legacy of Egypt is a 5 reel- 3 row slot game by Play'n GO which has 30 pay lines. The reels of this game are set on sides of the river Nile, in the ancient Egypt with beautiful pillars and glimpses of the Egyptian kingdom in the background, bearing a testimony to their great culture. You also get a chance to witness the mysticism of that era as you meet some Egyptian Gods on the reels of the game like Sekhmet (the goddess of sun, fire plagues healing and war), Sobek (the ancient god of crocodiles), Anubis (the god of embalming and the dead), Ra (the sun god), the Queen of the Nile (Cleopatra) and the Pharaoh (the most powerful person in ancient Egypt), Pyramids, and the magical scarab beetle which is a wild symbol.

The game brings along a number of chances to win with its amazing bonus features. Whenever, you land three blue Pyramids, they trigger the Wheel of the Gods which awards up to 20 Free Spins to you. The red pyramids during the Free Spins trigger Pyramids Spins and get you more Free Spins with a random multiplier up to 16. The Free Spins and Pyramid Spins can be triggered any number of times and make the game play real fun as you play to the your hands on the maximum winning amount of 5,000 times your bet!

Features of Legacy of Egypt Slot

The 5 reels of this online slot by Play'n GO are set in the Egyptian empire with the images of the beautifully painted pillars reflecting the great Egyptian art and the great dynasty in the background. Some of the mightiest gods and goddess of that era can be seen on the reels like Sekhmet (the goddess of sun, fire plagues healing and war), Sobek (the ancient god of crocodiles), Anubis (the god of embalming and the dead), Ra (the sun god), the Queen of the Nile (Cleopatra) and the Pharaoh (the most powerful person in ancient Egypt).

Pyramids and the scarab beetle also appear periodically on the reels bringing increased winnings for you as they are the wild and the scatter symbols respectively. All these symbols along with the alphabets A, K, J, Q, glide smoothly on the background of the hieroglyphic letters that add more to the appeal of the game, bringing out the theme of the game really well. The music used, does wonders and is bound to take you back in time on a journey to pyramids to meet these ancient Gods!

Legacy of Egypt comes with a number of chances to win. The game has a maximum possible win of is 5000 times your betting amount. This humongous winning amount is attributed largely to the Free Spin bonus features of the game since the base game comes comparatively with smaller wins. The Free Spins features are quite easily triggered and include -

Wheel of the Gods -

Whenever three blue Pyramids land anywhere on the reels, the Wheel of the Gods feature is triggered. The moment this feature is triggered, you will see a golden wheel appear on the screen. This wheel spins and awards you with any number of Free Spins within 1-20, depending on the number it stops on.

This feature gives Free Spins with a randomly chosen multiplier. When two red Pyramids appear on the reels during a Free Spin, the Pyramid Spins feature gets triggered. The Wheel of the Gods spins to the reveal the number of Pyramids Spins you have won. Each of these Free Spin comes with a randomly chosen multiplier and a possibility to re-trigger the feature if two wild scatters land again on the reels of the game.

Legacy of Egypt is developed by Play'n GO – winner of the award for The Best Slot Provider of the year 2017 at International Gaming Awards, and is packed with high audio and visual effects. Founded in 1997, with an aim to better serve the growing gaming industry, this software brand strives to be nothing but the best and has won numerous awards for its unparalleled expertise in the online gaming world.

Released on 24th April, 2018, Legacy of Egypt is a 5 reel – 3 row video slot created by Play'n GO which is based on Egyptian theme. True to its name, the game unfold the 'Legacy of Egypt' as you get to meet the ancient gods along with pyramids and the wild scarab beetle on the reels of the games. The thoughtful use of alphabets give the game a realistic feel making the game play a bit simplified.

The game is full of exciting bonus features that bring easy winnings for like Free Spins, Wheel of the Gods and Pyramids Spin feature! All these features get triggered quite frequently and are going to keep you engrossed once you start spinning the reels of this online slot game with 30 paylines. 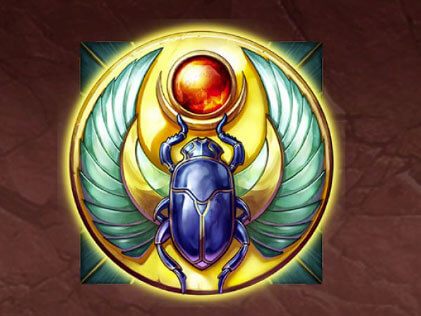 The reels of this 5-reel- 3 row online slot with 30 paylines are set in the Egyptian empire by the side of river Nile. The reels of the game have on them, some of the most powerful gods of the ancient Egypt that include Sekhmet, Sobek, Anubis, Ra, Cleopatra, Pharaoh, Pyramids and scarab beetle, which is the wild symbol. To keep the game simple yet interesting, Play'n GO has thoughtfully added some symbols out of the deck of cards like A, K, J & Q.

The bonus features that are triggered by the pyramid symbols like Free Spins, Pyramid Spins and Wheel of the Gods bring plenty of Free Spins winnings with a multiplier up to 16 and make the game play thrilling; making sure that you are not able to take your eyes off the game even for a minute.