How about a snowy Christmas morning with a rainbow in the backdrop? Yes! Pragmatic Play has done it yet again by creating a brand new video slots game called Leprechaun Carol which has a beautiful snow clad slots screen and payout symbols. It is a 3 reels, 5 rows and 20 paylines slots machine with some whooping bonuses, free spins and multipliers. The real money players can have a gala time playing this absolutely wonderful Christmas special slots game. There are Random Bonus Games, Free Spins rounds, Progressive Games feature where players can get a chance of winning up to 6000x of their bet amount.

From golden coins to big bonus multipliers, there is literally everything that a player wagering real cash would want to have. The slots game provider, Pragmatic Play has done a brilliant job by manufacturing this extremely beautiful bonus yielding game this festive season. So, collect your Christmas greetings now by hitting the 'Play Now' button. Go for a free demo mode to explore the entire slots machine and know how it rolls.

How to play Leprechaun Carol Slot?

There are some specific rules that must be kept in mind while playing Leprechaun Carol slots game. These are as follows:

Leprechaun Carol slots game is all about Christmas festivities and celebrations. The slots screen is designed in a way that the real money customers will find their way to humongous bonuses and big wins. While playing this slots game, players can hear the Leprechaun playing the melodious tunes of the Christmas Carols. The whole ambience created by the Xmas special slots game will give you all the festive feels and you won't be able to resist yourself from indulging in the spirit of Christmas.

Here is a newly launched slots game called Leprechaun Carol, coming straight from the house of one of the leading gaming software provider, Pragmatic Play. This award – winning gaming technology provider has given some very famous slots and other casino games to the online world of casinos. There are 100+ games powered by HTML5 gaming technology at Pragmatic Play. Each and every game powered by this software company is simply the best in terms of its technology, graphical designing and device compatibility.

This time since the big day of Christmas is approaching, so Pragmatic Play has brought forth another superbly designed and brilliantly executed slots machine called 'Leprechaun Carol'. By playing this online slots game for real money this festive season, players can win free spins, huge multiplier bonuses and big wins with the progressive games feature. Not only the Bonuses part, but the designing of this X – Mas special slots game is also so well done and we can say that the EGR awards winner, Pragmatic Play has done its job very well.

If you get 3 Scatter symbols on reels 1, 3 and 5, then any one of the following Bonus Games will get triggered at random. Any of the Bonus Games feature won't get re – triggered.

(A) More Free Spins: If Free Spins are revealed as a 'Collect' item, then it shall get added to the total number of Free Spins rounds won by the player.
(B) Multiplier: When a multiplier bonus is revealed, it will get added to the current multiplier bonus awarded. Total winnings will be multiplied by the total multiplier won and you can win up to 6000x of your bet placed.
(C) A certain symbol transforming into Wild: During the entire Free Spins round, the revealed symbol will act as Wild and it will also substitute for all the other symbols. The Wild symbols revealed will substitute for all the other symbols during the Bonus Games round. 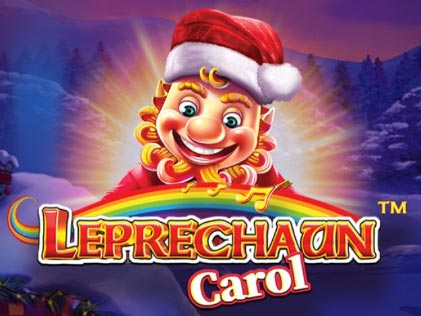 A brand new online slots game powered by an award winning software provider, Pragmatic Play is on board this Christmas season. Bring out the best player in you and hit the 'Spin' button to start spinning the reels of this fabulously designed video slots game. A snow clad slots screen designed to oomph your Christmas celebrations plus wonderful Bonus features and Free Spins, there's nothing that a slots game lover would miss in this recently launched game. Xmas festivities will galore when you play Leprechaun Carol slots for real money. Off course, players can try it once for free by hitting the demo mode. Don't miss the opportunity to strike progressive games feature and total winnings up to 6000x of your bet placed. This Christmas, play Leprechaun Carol slots game for real money and we bet, you won't stop spinning the reels.