Nothing quite beats the thrill and excitement to go on an adventure. And to go on an escapade which is as action packed and gripping as an Indiana Jones series, who would want to miss it? NetEnt just recently launched their new and exhilarating slot game that is inspired by archaeological discoveries. Give Lost Relics slot a spin to set out on a quest where you can unravel mysteries hidden under ancient relics and artifacts. This video slot features 5 reels, 5 rows and supports a cluster pay system as opposed to the regular paylines, something to be even more excited about. Lost Relics slot takes you on a quest to find hidden treasure chests that offers great winning opportunities and an unmatchable gaming experience.

To find out whether you would want to stake your real money for this amazing slot, you must play for free via our demo version available below.

The background score resonates and sounds starkly similar to the Indiana Jones theme track music. The music nevertheless contributes to build up the mysterious quotient for the slot game and amplifies every time you win something in the game. Lost Relics has crystal clear graphics and makes for a pretty sight to watch. The backdrop has a very ancient and rustic look to it which makes the slot game all the more appealing and exciting. All these interesting features add up to provide a fantastic game play experience to the user.

To understand the mechanism for each button in the game, read the points given below:

The Lost Relics slot has an array of symbols that award a win each time a cluster of symbols is formed. The various symbols have been mentioned below:

Standard Reel Symbols- There are three types of standard reel symbols. The high paying symbols are denoted by a snake encircling a ruby and a bangle with a jaguar cat imprinted. The Medium paying symbols are represented by a Greek Athenian helmet and small embellished swords. Whereas really pretty antique looking playing cards suits namely- green clubs, red spades, turquoise diamonds and mustard hearts are counted as the low paying symbols.

A cluster is formed when a symbol is adjacent to the same symbol either horizontally or vertically. To  trigger a win 6 or more same symbols must appear together in a cluster. Where multiple clusters are formed but they are not adjacent to each other, they shall be treated as separate clusters. Concurrent wins resulting from multiple clusters are added whereas only the highest win per cluster is paid.

The Hidden Chest Feature is only activated during the free spins round. A chest that occupies a number of places on the reels is hidden somewhere on the reels during the free spins feature. Under this feature, the spaces forming winning clusters become uncovered to reveal a hidden chest. These uncovered positions are carried forward to the next spin. The whole procedure continues until the chest is fully uncovered.

After the chest is fully uncovered, a random number of sticky wild, extra free spins and coin wins are awarded to the player featuring all three in combinations. The maximum number of extra free spins that can be granted in one session of free spins is 25. If the sticky wild feature is awarded, then it substitutes a symbol randomly (except another sticky wild symbol) and stays in the same position until the free spins round ends. The highest number of sticky wild symbols that can be present simultaneously during a free spin round does not exceed 6. When a player receives the coin win features via the hidden chest, a coin win of anywhere between 1 to 30x the bet size is awarded.

There are 3 types of chests- small, medium and large. All three of them offer different extents of extra free spins, sticky wilds and coin wins.

Net Entertainment or NetEnt as it is so popularly known is the brain behind this amazing cluster pays slot Lost Relics. Based in Sweden and Malta, NetEnt has quickly formed a firm ground for itself as one of the leading software providers in the world of online gambling. Being one of the most innovative developers, it is reputed for coming up with games that have stunning graphics and for making millionaires with its impeccably paying jackpots. NetEnt not only provides really amazing table games but also some of the most forward thinking slots namely Mega Fortune, Starburst etc. Lost Relics looks promising enough to join the likes of other NetEnt's famous slot games. 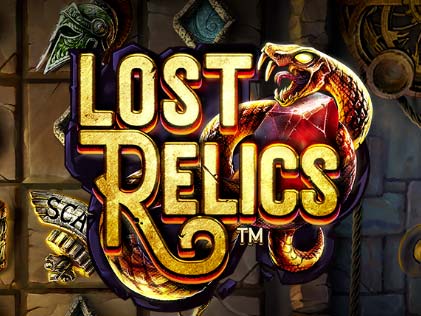 Testimony to NetEnt's high quality games is the newly launched slot game Lost Relics. This slot game is medium variance game that offers a massive theoretical return of 96.30% to the player. The slot game employs cluster pays instead of the usual paylines thus providing an edge of freshness to the game. If you're all things adventurous, then the Lost Relics slot is for you! Lost relics supports plenty of features like cluster pays, hidden chests, sticky wilds etc which help manifold your chances to win. Compatible and running seamlessly on all hand held devices and desktops, Lost Relics is definitely worth a try.