This Slot review will uncover all of the details about Lucky Little Gods Slot game from Microgaming!

Microgaming has finally chosen to take on the theme of anime characters and it does it so well in this online slot game. Lucky Little Gods not only features cartoon-like images, but also invites you to celebrate the Chinese New Year at the same time. It does this by offering up various gods of fortune for you to worship. Maybe by doing so, you’ll become the lucky recipient of a great reward. Of course, we’d expect nothing less from a Microgaming slot that incorporates 243 different ways for you to win. The slot itself is all very nicely designed, utilising some of the developer’s best graphics. Not only that, but it has a very appropriate soundtrack playing while you spin the reels too. Therefore, you can always guarantee an entertaining time while accessing it. As well as the overall game play of this one, you’ll also get the chance to trigger some appealing special features.

The overall design of this online slot game provides you with a layout of five reels and three rows in total. Therefore, it works as a standard interface for regular slot gamers to enjoy. Alongside this setup, it contains the aforementioned 243 ways for you to win. These ways to win are not something that you can change, so you’ll always have this amount in play. Further to the general layout, the game also provides you with some perfect images. In the background, there are a lot of clouds to be seen, but also the top of a cityscape. As we said, Microgaming has chosen to utilise some of its best graphics in Lucky Little Gods.

In order to play the game, you’ll need to be aware of some of its buttons and perks. You’ll first of all need to choose the type of wager that you want to play per spin. On the right-hand side of the screen, you’ll see the button with the coins on it. Clicking on this will open the wager section of the game. There, you can choose from bet amounts between $0.30 and $300. This means that the latter of these is the slot’s highest overall wager possibility. Not only that, but there’s an autoplay button for you to use as well. This allows you to set the reels off spinning several consecutive times at the same wager level.

The images within the game and upon its reels are all very cartoon, anime-like. There are various different icons within the slot too.

As we spoke of earlier, Lucky Little Gods comes from the Microgaming software developer. This company has been around for several years now, opening its doors in 1994 with the world’s first true online casino. In the time since then, Microgaming has crafted over 850 unique casino games, including over 1,200 variants.

As well as having a very appealing base game, Lucky Little Gods incorporates a few different specialities as well. These further enhance the slot and make it infinitely more enjoyable. 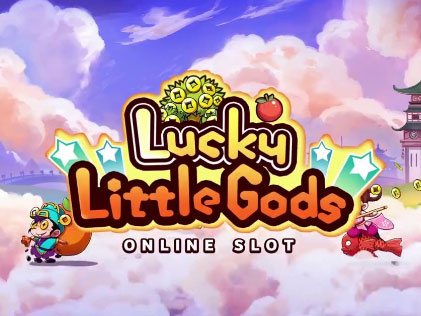 There’s a lot of quirkiness behind this Microgaming slot, which is all part of its charm. The graphics are very appealing, and the overall game play makes it truly welcoming. When you add the inclusive special features to this, you’ll find yourself enjoying a thoroughly enticing Microgaming slot.