Join the brave wanderer to get a chance on the Gift of Wealth and trigger the progressive jackpot!

Overview of Mercy of Gods Slot

The Mercy of Gods is an Egyptian civilization based slot game which has been developed by Net Entertainment and is another addition to its list of renowned progressive jackpots after Divine Fortune. This online video slot game brings some unique and interesting bonuses which are going to add loads to the wins that you can scoop out by spinning its reels.

Its gameplay portrays the Goddess of Life - Isis who is going to bestow you with generous wins through her interesting gifts. These include the Gift of Life respins which helps you win Free Spins and the Gift of wealth which is nothing but the massive jackpot along with some other amazing bonus features. The beauty of the game lies in the timely appearance of the figures like the Goddess of Isis at the beginning of the bonus rounds and the angry Anubis at the end of it that make the gameplay a lot more realistic. Read below to know more about its features, Free Spins and the bonuses that this game has to offer to the players..

How to play Mercy of Gods Slot?

To enjoy the gameplay of this online slot, you just need to set the amount that you want to stake and spin the reels. Use one of the following buttons to be able to do so.

Level: It is the first option that you will see on the bottom right-hand side once you launch the game. Choose any value between 1 to 10 depending on the amount you want to stake.

Autoplay: This option lets you automatically spin the reels of the game for a given number of times. You can select any value between 10 to 1000 using it. Further, it also comes advanced features that let you stop the reels from spinning in certain scenarios like if you win or lose by a certain amount or if you trigger the jackpot.

Maxbet: On clicking on this option, the bet value will bet automatically set to the maximum of 10 levels and 200.

Coin Value: Choose any value between 0.01 to 0.50 by using the + and – options below the coin value located next to the max bet button.

Features of Mercy of Gods Slot

Net Entertainment has done amazing work with this online slot as it presents unparalleled graphics that going to be a huge treat for the players. The reels of this slot game are situated in the foreground of an ancient tomb that the brave archaeologist is going to investigate. There are two statues of Anubis on either side of the reels that welcome you to the ancient Greek world. In addition to this, the oriental music in the background and the uniquely crafted symbols are going to be perfect companions as you enjoy the gameplay. The symbols include Tatukhem, Scarab, Falcon, Eye of Ra and the Ankh which are indeed going to take you back in time.

The high-paying symbols used in the game are the figures that revolve around the theme of the game. These include the female archaeologist, scarab and horus falcon. These symbols have been placed inside the golden frames which also highlights their significance. Further, they present an amazing blend of simplicity and HD graphics and can be easily identified on the reels of the game.

The low paying symbols used in the game consists of the number and alphabets that can be seen in the deck of playing cards. These include the Alphabets A, K, Q and J. They have been artistically crafted and are red, green, pink and blue respectively. Outlined in golden these symbols, blend in with theme flawlessly while making sure the wins keep flowing every time you spin the reels of the game.

The wild symbol used in the game is the symbol with the image of lotus outlined in golden which was considered to be a sign of life and rebirth in the ancient Egyptian period. It brings prosperity for the players as it can appear anywhere on the reels of the game and bring the highest wins according to the paytable. These can also appear in the Free Spins and replace all the symbols except the scatter and the bonus symbol. The wild symbols join to form the “Ankh' in the Gift of Double Wilds feature which is another Greek significant totem which makes sure you are going to remains engrossed in the gameplay once you start spinning the reel.

The Eye of Ra, which is also considered to be a good luck charm is the scatter symbol which is used in the game. Justifying the old Egyptian belief it does bring a lot of Good Luck for the players. And, each time you land at least 3 of these scatter symbols, Free Spins will be awarded to you.

This feature is activated within the Gift of Life Free Spins if one wild symbol lands behind the other wild symbol. The wild symbol then expands to cover the entire reel generating more wins for the players with his humble gift of the goddess of Isis. The expanded wild looks like an “Ankh' which is another significant symbol the Greek civilization.

If you are lucky enough you may also trigger Gift of Life Free Spins within the these and scoop out bigger wins.

Mercy of Gods also bestows the Gift of Wealth to the players in the form of the three jackpots that it offers to the players. These jackpots can only be claimed by triggering the jackpot game which can be done in the base game as well as in the Gift of Life Respins when you land three bonus symbols. Once you trigger this, you will be guided to the jackpot reels by the Goddess of Isis. This will take you to the jackpot game which is altogether a new game with 5 reels and 3 rows.

In this game, the bonus symbols that you accumulate are placed on the reels and depending on the number of bonus symbols you get in a row you may trigger one of the following jackpots. All the coins are assigned a random value varying between 10 – 200 times which decides the amount that you win.

The end of the bonus round is marked by the appearance of Anubis heavily panting, after the tough fight as the winnings are revealed

NetEnt is the proud producer of this game which also brings along a chance to win a multi-million progressive jackpot! Established in 1996 NetEnt is a reputed software brand which does not need any introduction as its customer base is already spread across the globe. Further, Net Entertainment also has some of the famous slot titles to its list of games like one of the most game – Starburst. Although Mercy of Gods slot game is frequently known as the sequel of Divine Fortune but the theme of the game and the exciting bonuses features make it a treat to relish. With a chance to trigger one of the progressive jackpots being the cherry on the top!

Mercy of Gods Slot – Our Conclusion 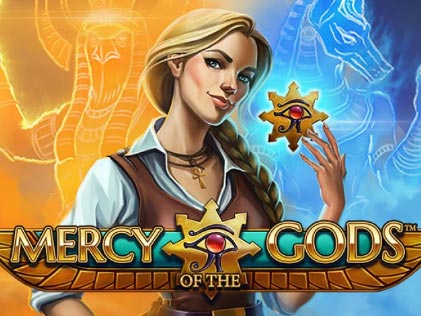 This slot game is based on an Egyptian theme and depicts the expedition of a brave female archaeologist as she studies an ancient tomb. The tomb belongs to the old Egyptian civilization and unveils a world of ancient totems for her. Spin the reels of the game as the Goddess of Life Isis, herself brings some amazing gifts for you like the Gifts of the Life Respins which awards you huge wins. Also if you are lucky enough, the goddess may shower you with the Gift of Wealth which can help you trigger one of the jackpots but only at the risk of facing Anubis!