Explore ancient mysteries from the Egyptian Civilization buried deep in the desert with International Game Technology's (IGT) new slot game 'Mistress of Egypt Diamond Spins'. The slot machine features 5 reels with 30 paylines and allows the players to compete for 3 extremely rewarding progressive jackpots. Playable across all devices, the bets start from 60p and go up to £9 per spin. Delve deeper into the mysteries via your desktop or any hand held device - because who knows what treasure you might discover. This online slot machine offers multiple winning opportunities along with an extra ordinary gaming experience. So, if you're fascinated with ancient history, then look no further and join the Mistress herself on a quest to unravel the riches and mysteries of Egypt. But before that, read this unbiased review to know what this game is all about!

How to Play Mistress of Egypt Diamond Spins Slot?

A quick run down of all the available buttons and their underlying functions has been given below. This shall enable the player to easily understand the how the slot game can be played without any hassle :

Game Rules – On the right hand side corner of the slot machine is a button by the same name. Clicking on it toggles all the detailed game rules, bonus rounds, pay table, pay lines, the various bonus features etc.

Spin Button – Instead of being on the usual spot (at the end of the game), The Spin button is given on the right hand side of the reels, which makes it unique and adds freshness to the not so new theme of the slot. Using this button, the players can kick start the game. This button is represented with a circular arrow which spins the reels on a predetermined bet level.

Auto Play – Using this button, you can spin the reels uninterruptedly or in succession as many times as your wish to. Under this the game plays automatically at a predetermined coin value for set number of times. You can also alter when to discontinue the Auto Play feature using constraints like Loss limit, Single Win limit, Balance limit etc. You can set the options as you desire.

Bet Level – The betting options can be adjusted using the +/- buttons. The current bet value is shown in currency. For mobile or tablet players, pressing the 'arrow' button opens the configuration menu which allows the players to set their bet levels according to their preference.

Set against a night in the palm fringed deserts of the Ancient Egyptian Civilization, the Mistress of Egypt Diamond Spins Slot is nothing short of amazing and serves as a treat to the eyes. Visually appealing, you would find the Mistress herself on the left hand side of the reels with a golden pyramid levitating in her hands. The backdrop of the reels are curtains in hues of blush pink and purple which gives the slot an authentic feel. While you're enjoying the vivid graphics, the game play is interspersed with light Egyptian music which amplifies during wins. What's more, players can enjoy the same graphics and animations both in the portrait as well as the landscape mode, thus effectively managing to take the players back in the era of Pharaohs.

The Reels in this online slot game are nothing but large stacks of the same symbol, thus the name Synchronized Reels. Prior to every spin, a reel of similar symbols is randomly selected under this feature. With an exception of the bonus scatter symbol, wild symbol and diamond symbol, any of the remaining symbols can appear anywhere on the reel stacks. What's more, the same symbol can also appear on multiple reels as large stacks during the same spin whilst this feature is active.

When Wild Pyramids appear during the base game anywhere between 3 to 15 symbol positions on the reel, the Random Wilds Feature is activated. The wild symbol spins in the Mistress's hands and once she releases it into the game, the Wild symbol replaces every other symbol except the Bonus symbols. Wins are only evaluated after all the wild symbols appear. Furthermore, this feature can be triggered during any free spin.

Add to that, every Diamond symbol that lands, either reveals a Bet Multiplier or a Progressive symbol. These revealed symbols then become sticky and stay in the same position until the bonus round ends. During the respin sessions, additional Diamond Symbols may appear wherein the above process is repeated. After all the 15 positions on the reel matrix are covered with a revealed symbol, players are entitled to win the Grand Progressive. The Diamond Spins bonus continues up until there aren't any pending respins or until all the 15 positions on the reels are filled.

This bonus feature is triggered when 3 or more scatter symbols land anywhere on the reels. Likewise to The Diamond Spins bonus, the reels used in this bonus round vary from those in the base game. However, this bonus can not be re-triggered. The players are awarded different number of free spins depending upon the number of scatter symbol a player lands during the main base game. The bifurcation is :

The brain behind this incredible slot game is none other than IGT, which ensures to stay at the forefront of online gaming by rendering cutting edge solutions and premium content to multiple casinos online. Likewise, with the Mistress of Egypt Diamond Spins Slot, IGT yet again proves its mettle by delivering an online slot that incorporates splendid graphics and aesthetic features along with an intriguing game play. 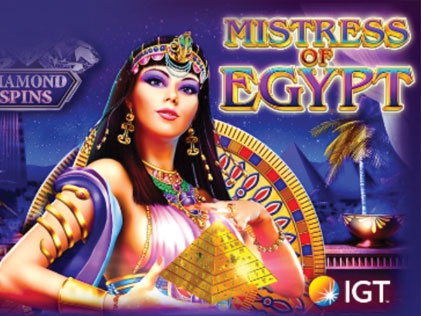 As part of the Diamond Spin series, you would expect a lot more in terms of volatility from this slot but it ranges between low to medium. Nevertheless, the theoretical return to player (RTP) is touted to be the default 96.2%, thus appropriate for players who don't want to risk their money by playing a highly volatile slot. Most importantly, what the Mistress of Egypt Diamond Spins Slot has going for itself are the 3 Progressive Jackpots that increase gradually to award big wins coupled with exciting bonus features. With stunning graphics, plenty of bonus features that manifold your chances to win, the Mistress of Egypt Diamond Spins Slot is a must try for everyone who has a bend towards primeval things.