Set out for a Massive Robbery with the Phantom Thief!

Time to go on a graphic heist with The Phantom Thief! An engaging video slot game by Gameplay, Phantom Thief is a 5*3 game with 30 betways. A robbery so grand, players must be really swift and quick to pull this phantasm off! It offers many incredible features that facilitate in providing an exceptional gaming experience. Come on board if you have what it takes to dodge and hoodwink the cops while you make your way to secure and attain precious products.

First off, the background music is absolutely appropriate for investigating a robbery scene and most definitely builds suspense for the player. What adds to the suspense is the jewellery store where the Phantom Thief attempts to evade the cops and gain symbols that trigger free spins and reveal winning combinations. The kid costumed as a sly thief is chased by security and parodies the very fact that cartoons are based on, where criminal life isn't always the best path to tread on. The graphics are appealing and make for a perfect crime and robbery scene which instigates and demands an investigation.

For clearly defined and full details, click on the information button. Here the various paylines have been precisely explained, the bonus, wild and scatter symbols have also been specified. The information part of the game also gives in depth information about what will trigger the free spins and how. Payout is awarded starting from the leftmost reel then further moving to the right side reels.

The button between Max Bet and The autoplay button spins the reels once and is used to pause or play the reels from moving.

The letters A, K, Q and J represent the low symbols. If these appear on the pay lines, payouts are awarded. However, only the highest winning combinations are paid for each pay line.

The bonus symbols are denoted by a locked vault that has the word 'bonus' written on it. Should these symbols come together in a set of three, they trigger free spins.

During a winning combination, the symbols are removed via an avalanche and are replaced with other symbols.

The Phantom Thief supports Collapsing Reels wherein every time a player wins or each time a winning combination is achieved, the symbols on the payline disappear and are replaced with new symbols that fall down to fill the void or gap. This multiplies the player's chances to win consecutive times by wagering only once.

Phantom Thief Slot is powered by the software giant- Gameplay. The word itself is suggestive and synonymous with providing an incredible gaming experience to users and players accessing the online site or mobile based terminals. Gameplay supports and backs some of the industry's leading casinos, slots and games etc. It also ensures that each game is different from the other and provides an array of themes along with concepts that are comprehensive. 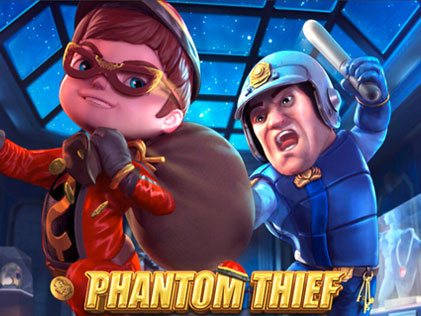 For players who relish exciting adventures or escapades then this high paced video slot from Gameplay has been catered especially for you. Feel the adrenaline rush when the cops chase you and stop you from pulling the heist or robbing off with Phantom Thief. For a gaming experience, you wouldn't forget, Phantom Thief begins with 5*3 reels, 30 betways and features collapsing reels which manifolds your chances to win! Experience all the fun and thrill when you play this slot game, where the possibilities to win are incredible!