Have you ever battled it out for gold in Pirate style? Well, if you have never done that, then the world of online slot gaming is bringing to you one such slots machine where you can start your treasure hunt from the comfort of your mobile and desktop devices. Red Tiger Gaming has brought forth yet another slots game based on Pirates' theme and just like the previous version, Pirates' Plenty – The Sunken Treasure Slot, they have nailed its sequel too.

We are here talking about Pirates' Plenty Battle for Gold Slot which has got 5 reels, 4 rows and 30 paylines. This newly released slots machine is definitely one to watch out for as it has got a maximum winning amount of over 5,000x the stake placed. Adding to that, the background music, visuals and payout symbols, everything depicts how the pirates go by raiding the ships. So, brace yourself to unlock rewards by finding rest of the pieces of the treasure map. The loot is on! Take your Pirates mask and start your game now for real money.

How to Play Pirates' Plenty – Battle for Gold Slot Game?

Please bear in mind the following gaming rules before you start spinning the reels of this online slots game:

This newly launched version of Pirates' Plenty rightfully depicts the world of sea smugglers. The background of the slots screen will give you an insight into the treasure hoarded by the Pirates' from their sea conquests. What a player will find even more amusing is that these thieves are going to reward the real money players with some pleasing multiplier bonuses, free spins etc. To put it straight, this time the gaming supplier, Red Tiger has gone one notch higher with Pirates' Plenty – Part II.

Standard Reels Symbols: This slot game has got 9 standard reel symbols. Five out of these nine are high – paying symbols which are: Pirate Skull, Pirate Treasure Bag, Pirate Cannon Shooter, Pirate Pistol/Muskets and Bottle of Grog. Rest of the four are low – paying symbols which have a Spade, Heart, Diamond and Club, each of them embedded in a gold coin.

Map Symbols: These symbols can get triggered on any spin except for the Battle Spins. Players will have to collect Map Symbols clearing the path to find the hidden row to move the ship along the treasure map.

Wild Island Row: Map Symbols appearing on the reels will unlock the Wild Island Row. This road to treasure when gets unlocked will open all the future spins to take place at the same stake value.

Wild Symbols: This symbol will substitute for all the paying symbols. Players will be awarded with Wilds by the 'Fire' symbol or even when Captain Blackbeard will fire during the Battle Spins. Wild symbols might appear randomly on the reels without getting triggered if the players successfully unlocks the 'Wild Island Row'.

Pirates' Plenty Battle for Gold is just another thrilling version of the very popular game called Pirates' Plenty The Sunken Treasure Slot. The software developer, Red Tiger Gaming has done a beyond brilliant job once again with the second part as well. Literally, going with the facts, Red Tiger Gaming started its stint in the world of online gaming in the year 2014, it is hard to believe that this gaming supplier has done it yet again.

The way Red Tiger has brought forth the whole scenario of the sea smugglers awarding humongous amounts in prizes, we bet they have made enough audience for itself. Moreover, this gaming supplier has previously also delivered many jackpot – yielding games. Just in case you don't remember the casino slots powered by Red Tiger Gaming, we would like to remind you that Pirates' Plenty Slot Series is backed up by the makers of games like Jack in a Pot Slot, Laser Fruit Slot etc. 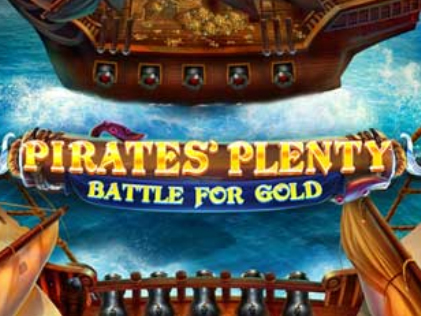 Summarizing this detailed review on Pirates' Plenty – Battle For Gold online slot game, we can say that this slots machine is indeed a tour to the world of Pirates. In any case, this tour wasn't enough, the software provider, Red Tiger Gaming has loaded the second season of Pirates Plenty with some more treasure bonuses in the form of Wild Symbol Multipliers and Free Spins. The gloomy slots screen with Pirate symbols fetching you huge winnings is another major highlight of this online slots machine. So, we do recommend all the slot lovers to set their routes to unlock and unwind this pirated yet bountiful experience.