Reactoonz is a modern video slot game which has a space theme. On the many reels of the game you will see different alien symbols starting from the smallest to the biggest. The game has great animations and a very fast game play. The many available features make Reactoonz an interesting and attractive video slot game. It’s different from what we are used to seeing in ordinary video slot games, so if you are looking for an original game Reactoonz is the slot for you.

The first thing you will notice in Reactoonz is the 7x7 reels design. There are no pay lines in the game and winning combinations are formed with 5 or more neighboring symbols touching each other on at least one part horizontally or vertically. Since the game symbols usually land in small stacks you can get many winning combinations. The game also has a rolling reels design. This means that in a winning combination the symbols involved will disappear from the reels and new symbols will land to take their place. The bet size in Reactoonz can range from $0.20 to $100 per spin.

All of the symbols in the Reactoonz slot are aliens of different sizes. They don’t have any names and the payouts depend on their size. The smaller the alien the smaller the payout and vice versa. The biggest alien in the game is Gargantoon. He doesn’t have a payout attached but he is the wild symbol in the game and substitutes for all other symbols.

Reactoonz is a video slot game coming from Play N Go. This provider has several other similar slots in their offer which have become a big hit among Play N Go players. Their innovative approach towards new video slot games is really paying off and Play N GO is slowly becoming a very popular brand in the online gambling world.

Reactoonz is available for play across all mobile devices using Android or iOS. All you need to do is launch the game from your mobile browser at any of our Play N Go casinos and you will be ready to take on the aliens in seconds.

The bonus features in Reactoonz start from the very first spin on the reels. On the right side of the reels you will see Gargantoon. On any non winning spin he can award 4 to 8 random wilds across the reels. Also on every spin one set of aliens will be highlighted. If any of them is involved in a winning combination he will leave 2 wild symbols behind. This increases your chances of hitting more winning combinations. Another feature is if you get 4 matching symbols in a 2x2 grid, they will turn to one big symbol and will double the payout. All of these features help you fill up the Quantum Leap and take you one step closer to unleashing Gargantoon on the reels.

Next to the reels you will see the Quantum Leap meter. He has 5 levels and each one if filled up when 25 symbols are involved in a winning combination on the reels one after another. Each level can award one of the four Quantum Leap features. The Implosion feature will award 3 to 6 wild symbols on the reels and at the same time will destroy all adjacent symbols. The Incision feature will form a wild symbol in the center of the reels and place two diagonal lines across the reels. The lines will show matching random symbols including the wild. The Demolition feature will destroy all low paying one eyed alien symbols across the reels. Last but not least is the Alteration feature which will randomly choose one of the one eyed alien symbols and transform them to other symbols. These features are triggered in the first four levels of the Quantum Leap, while the fifth level releases Gargantoon on the reels. 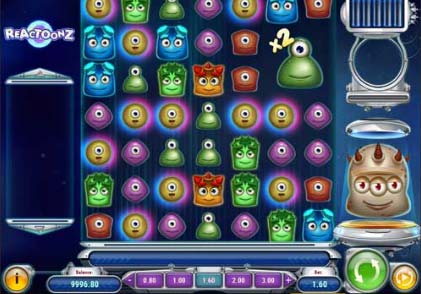 If you start playing the game you will see that Reactoonz is a great video slot game. The design and the many features may be confusing at first but after some time you realize that there’s nothing complicated about the game. All you need to do is keep spinning and hope to get to the last stage of the game. Once Gargantoon is on the reels get ready for some big payouts to happen all the way up to 750 x stake from a single winning symbol and more. This is why Reactoonz and the other similar slots from Play N Go have become such a big hit across the Play N Go network.