Experience the magic and win a bucketful of bonuses by spinning the reels of this online slot!

Based on the theme of fantasy and magic, Reel Talent online slot promises fun-filled gaming experience to the players who spin its reels. This slot game has 5 reels and 3 rows which have been placed on the stage of a talent hunt show and has been developed by both Microgaming and Just for Fun gaming. Symbols used in the game consist of the wild animals showcasing their talents like the singing lion, magician rabbit playing cards, the guitarist wolf and the fire blower crocodile. Two bonus features have also been incorporated in the game that make this slot game stand apart from the others. They are the 'Symbol storage' feature with which the symbols are stored until they add up to 3 and trigger the 'Super Spin feature, that the players are definitely going to love playing with. Apart from it, this slot game also offers a number of Free Spins and respins to the players thus making it one of the best online slot machines to try your hands on.

Like all the Microgaming games, this slot machine also consists of a number of high-quality graphics and music effects. Reels of this slot game seem to be situated on the stage of a talent show with the stairs leading to it at the bottom left-hand side. The entrance to this stage is decorated with golden lights all around it and also serves as the 'Symbol storage.' Symbols used in the game consist of different animals trying their luck in the talent show like the singing lion, the rabbit trying magic with cards, the fire blower crocodile, the guitarist wolf, the wild and reel symbol. Background of the reels consists of sky blue color with a faded glimpse of a star in the background. And, this all is accompanied by a thrilling background track which makes the game play a lot more fun.

Microgaming and the Just For The Win gaming have put their heart into designing this slot which reflects from the minutest details of the games. The buttons have been beautifully carved out and the values are represented on a circular fashion which adds to the appeal of the game. These buttons include -

The Reel talent symbol which consists of the word “Reel Talent” inscribed on it in yellow color against the red background is the highest paying symbol which is followed by the singing lion, the fire blower crocodile, the guitarist wolf and the rabbit playing with cards.

The low paying symbols used in the game include the inanimate objects that you see on the reels of the game like microphone, the torch, the guitar and playing cards.

The wild symbol used in the game play is the one with the potential to generate the largest wins. It is easy to spot among the other symbols and consists of the word “WILD” in golden color. It substitutes for all the symbols in the game-play but cannot be collected.

Microgaming and Just For the Fun gaming have given the players abundant chances to win with this online slot and one of these is the Symbol storage feature. With this feature, every time you land three of any symbols on the payline, one symbol will be added to the symbol storage which can be seen on the right side of the reels. When you collect three symbols in this symbol storage on three consecutive spins, it will trigger the Superspins.

Super spins are triggered when you are able to collect three symbols in the symbol storage on three consecutive spins which then start the bonus round. There are three stages of the Super spins which have been briefly explained below-

Super Spin show time is triggered when you collect three different symbols in the 'Symbol Storage'. During these Super spins, all the symbols are removed from the reels of the game except the symbols collected in the 'symbol storage'. In the first stage viz the show time, three different symbols will be present on the reels of the game during the super spin.

When you collect two same symbols in the symbol storage to the right of the stage it triggers the next stage viz the Big Stage super spin. In this, the number of winning chances also increases as the symbols on the reels will consist of two symbols of the same type and just one more symbol; as collected in the storage.

This is the third and the last stage of the super spins and brings the maximum chances to win for the players. It is triggered when three same symbol is collected in the storage. When this round starts only three symbols of the same type remain on the reels of the game and replace all the other symbols. Thus bringing maximum chances to win.

This online slot gives infinite winning chances to the players. Everytime a winning combination lands on the reels and collects in the symbol storage, one respin will be added to the account of the players.

This slot game has been produced jointly by Microgaming and Just For The Win gaming. Thus, it comes with an assurance of a high-quality gaming experience. Founded in 1994, Microgaming has come a long way in the online gaming industry and has won a lot of auspicious awards like EGR awards, Malta Gaming Awards which it has been collecting almost every year since its inception.

Just opposite to Microgaming with abundant of experience by its side, Just for the Fun gaming is a newbie in the online gaming industry and was launched in 2017 and has already produced many other popular games with reel slot being one of them. Launched on 7 November 2018, this online slot game presents a fine blend of experience and young talent and is based on the theme of magic. It has reels 3 rows, 20 paylines and brings guaranteed fun to your gaming experience. Furthermore, the game is also loaded with bonus features like superspins, symbol storage and respins. 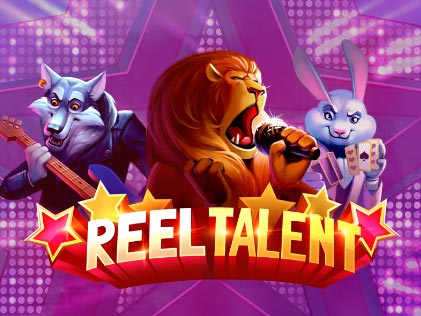 This 5 reel – 3 row slot game by Microgaming is based on the theme of fantasy and magic. Every element of this game from the symbols to the buttons used have been intricately designed and reflect perfection. Reels have been set on a stage with blue color in the background which adds real appeal to the gameplay. Along with this, the game also offers a number of winning chances to the players which can be attributed to its features like super spins, respins and symbol storage. The symbols used in the game consist of animals attempting in a talent show and include a signing lion, the fire blower crocodile, the guitarist wolf and the rabbit with his playing cards along with objects like microphone and torch that are completely in sync with the theme of the game. Thus making it a gem if you are the one who loves trying out your luck with new games launched by top notch software providers.