Secrets of the Amazon Slot Review

Secrets of the Amazon Slot Information

Overview of Secrets of the Amazon Slot

Secrets of the Amazon is an interesting slot game fueled by Playtech-that is sure to captivate you from the moment you open the slot screen. Giving you the feel of tropical Amazon jungle and its wildlife, it will let you explore all its features, mysteriously unwinding the free spins, extra multipliers and big wins. This thrilling slot will keep you on your toes, as it's quite possible for you to win or lose by getting into ‘all or nothing’ vibe of the Amazonian jungle.

Before getting into the technical aspects of the slot, let’s just pause for a minute and take a look at the stunning graphics showcasing the very feel of dense amazon forest, its diverse wildlife, legendary tribal culture and much more. The reels of the slot are slightly transparent green in color and are made out of vines and branches to give a tropical kind of look. These reels are surrounded by informative slot tabs designed on mushrooms and leaves of the amazon vegetation with a thickly populated jungle in the backdrop. The symbols are also very dramatic and leave no chance to show the exotic flora and fauna, that too with some great sound effects.

The important symbols to look out for in this slot game are the wild symbol and the scatter symbol. To talk about the former one, it is represented by a beautiful tribal woman spelling a cast through her mythical eyes. This symbol when appears on the screen, will substitute for all other symbols but not the scatter, will also double the value of a win it contributes to, and last but not the least, it will let you win as high as 50000 times your stake (if 5 of them appear on a payline). On the other hand, the scatter symbol is represented by a Moonflower, which will trigger the main bonus feature discussed a little later in this review. Other symbols are that of parrot, chameleons, frogs, panther, snakes and leopards.

This slot game can be played with a minimum bet going as low as 20p to maximum as much as £500 per spin. If we talk about the features, the 'Line Bet' feature lets you control the coin size, 'Auto Play' features gives you the option of uninterrupted number of spins, 'Spin' button sets the reels into motion, ‘Turbo Mode’ button speeds up the spins, ‘Bet Max’ allows for the maximum bet. The 'Info' button takes you to a new screen that gives you the entire technical information of the slot and its various aspects like the paytable, scatter symbol feature, multiplier info and Paylines.

Bask in the Moonlight!

As mentioned earlier, the scatter symbol in the game is represented by a Moonflower. This symbol, when appears for 3 or more times on the screen, triggers a hidden Moonlight Free Games Bonus. There’s a scatter payout that a player will receive in this case. It will take you to a different screen that will allow you to choose from the number of scatters that initially appeared on the screen. So selecting one of the scatter will reveal the number of free spins that you get. These spins start off with 1x multiplier and go up to a max of 50x multiplier. Choosing one out of the : 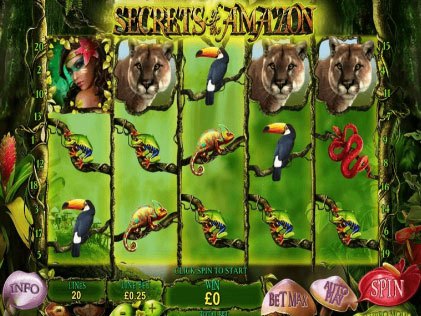 What we loved the most about this online slot is the perfect balance between the visual appearance and the amazing winnings. It clearly shows the amount of efforts put in by Playtech into making it an enthralling game for the players. Bonus rounds keep coming up regularly, hence you will find it almost irresistible to not hit the spin button. The volatility of this slot will turn the tables in either direction and hence players should definitely try their luck with this slot.

Top Casinos to Play Secrets of the Amazon Slot

Rate Secrets of the Amazon Slot & Write a Review