Travel through time with Shogun in this cyberpunk themed online slot!

Play Now
Powered By Just for the Win

Overview of Shogun of Time Slot

This online video slot game by Microgaming and Just for the Win gaming is going to transport you to the fourth dimensions in the parallel future world with its gameplay. You get to travel from the time of Japanese feudal (Shoguns) to the futuristic view of the modern Tokyo town as the female Shogun takes you through them. Thus making it a perfect choice for the players who love the ancient Japanese or cyberpunk themed games.

Just for the Win gaming has given their best in this online slot and you will come across some unique features like 4 reel – 81 game which expands to 5 reels with 243 both ways win and a chance to win up to 16 Free Spins on every spin.

How To play Shogun of Time Slot?

Microgaming and Just for the Win Gaming have managed to keep the game play simple in this online slot. And, you just need to select the amount that you want to stake to start enjoying the gameplay. However, in order to do so, you need to use some of the options given below.

Features of Shogun of Time Slot

The 4 reels of this slot game are situated in a cyber station which has been given a dynamic touch of Neon colors like purple and violet that go with the theme of the game very well. A glass cylinder can also be seen on either side of the reel with flowers inside them. The floor where the reels are situated is equally intriguing and has a circle where some electric activities are always being held. The symbols used have been intricately designed and present a mixture of cyberpunk and the Japanese traditions; just like the theme of the game. Background music is another element of this game which is going to make the gameplay even more interesting and is going to be loved by the players.

The High paying symbols used in this game are the ones that are associated with the Japanese time traveler and her futuristic alter. These include the symbol with the words 'Shogun of time', her golden mask, green hand fan, red corset and some coins belonging to the ancient period of Feudal Japan. Just for the Win gaming has made generous use of high-quality graphics and these symbols stand beautifully on the reels of the game adding more to the wins you get and the fun that this game brings for the players.

The low paying symbols used in the game consist of symbols found in a deck of playing cards. These include A, K, Q, J and the number 10. These symbols have been given a high-tech mechanical look that goes with the Cyberpunk theme of the game. Although these symbols bring comparatively lesser wins, they do appear frequently making sure you don't stop winning every time you spin the reels.

Wild Symbol - Shogun, the time traveler is the wild symbol used in the game. This symbol has got its name from ancient Japan commander feudal lords which were known by the same name. It justifies the theme of the game as it revolves around a female warlord in two forms; her ancient Japanese altar and her futuristic image as she travels through space through the time.

There is no limit on the number of Free Spins that you can win while spinning the reels of this slot game. As, every time you land three or more Free Spins symbols on the reels of the game, you can spin the reels for free. During the Free Spins, Shogun appears as a stacked wild and stays on the 3rd reels for the entire bonus spins which generates more wins.

This feature is activated when you get three or more consecutive wins in the base game. The 5th reel appears in the middle of the 2nd and 3rd reel and the game expands to 5 reels 243 both ways pays dimension. This feature brings fairly more chances to win since all the other symbols and reels freeze with only the middle reels spinning in this bonus round. Thus increasing your chances to win in this bonus round.

This slot game has been developed by Just for the Win gaming studios for Microgaming. Just for the Win gaming is a relatively new gaming producer which was taken over by Microgaming, the giant of the online gaming industry, because of the high-quality games that the former has been producing for over two years. Coming from two brands that are known for the top-notch quality of games, this slot game is definitely not going to disappoint the players. So, get ready to witness exclusive features like Free Spins and Split Reel which are followed by the addition of one extra reel to the otherwise 4 reel slot game which takes you to the future Tokyo along with Shogun, the female time traveler from ancient Japan.

Shogun of Time Slot – Our Conclusion 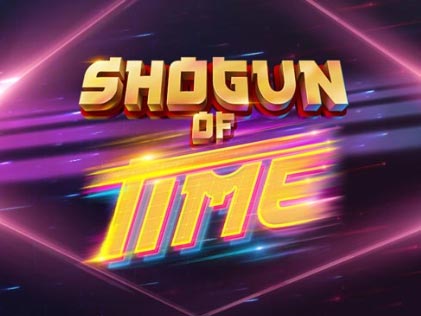 Microgaming and Just for the Win gaming studios have used a new approach with this slot game, instead of the standard 5 reel video slot (which are quite common these days), this slot has been made to have 4 reels and 81 pays. Further, it also has interesting features like 'Split Reel' and 'Free Spins' during which the game expands to present 5 reels and 243 pay-lines which pays both ways. The theme of the game is quite unique and it unfolds a futuristic, cyberpunk mixture to the ancient Japanese Shogun or Feuds. The game is set in the foreground of future Tokyo city while the female shogun and her time traveler alter are the centers around which the game play revolves.