South Park is all set to strike a way on the reels of 25 pay lines!

South Park is one of the most popular animated TV shows in the world. Well at least they’re up there on the throne with the Simpsons, but we can easily say it’s one of the most vulgar animated TV shows in the world. We all know the little rascals from South Park Cartman, Kenny, Stan and Kyle. Now we have a chance to see them on the reels of this 25 pay line slot by Net Entertainment. This is game which will keep you spinning for hours without ever feeling bored. You’ll have fun playing the game even if you aren’t winning anything decent on the reels.

The designers of the game paid a great deal of attention to details. They made sure that the slot is original and that all symbols in the game are taken from the original TV series. The animations are great and there are a lot of popular dialogues from the original show. This way you can remember all the catchy phrases from the show as you spin the reels.

During base play players can trigger one of the three random bonus features. The Cartman mini feature will award a block of 3x3 wilds on the 3 central reels. Once Terrance and Philip appear on the reels you can expect 3 extra wilds on the screen. Mr. Hankey will jump from symbol to symbol turning them to wilds. 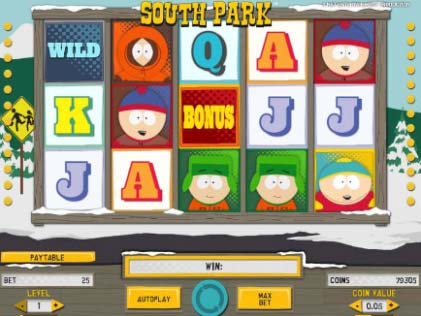 South Park is a very interesting and funny video slot game. There’s no doubt that the TV show popularity equals the game so it’s no wonder why many NetEnt enthusiasts enjoy spinning the reels of South Park. The game has great animations and cartoon symbols with hilarious bonus features. With so many bonus features during base play and 4 different bonus rounds players are guaranteed to have a lot of fun while playing this game.