Visit the old England in this new slot game by Red Tiger Gaming named as ‘Spin Town’. This exuberant video slot is a 5 reels and 4 rows game with a total of 40 bet ways to win with. Located in the middle of the road, it holds the traffic still, making the Wilds (or residents of the town) wait, to cross the slot reels on the side walk.

Holding no ‘Free Spins Feature’ in its clutches, this slot game has a town full of people or, in short, townies that act as Wild Symbols in the game. These people or these Wilds in the slot ranges from Old People to Youngsters to the Royal Guardsmen, along with Bonus Games Features that stars The Beatles Rock ‘N’ Roll Shuffle, the Kick Off Football Hooligans and much more, all over the reels of the slot game.

A player can place the stake value from a £0.20 (or 20p) to a good £200 per spin, with the maximum jackpot win being 400x your stake (that totals to be around 80000) in winnings. It’s all fun and games in this video slot and it can be played on a regular basis without once getting bored. Read this unbiased review to know if you can play this game for real money or you can even try the free demo version, in order to gain more clarity.

How to Play the Spin Town Video Slot ? 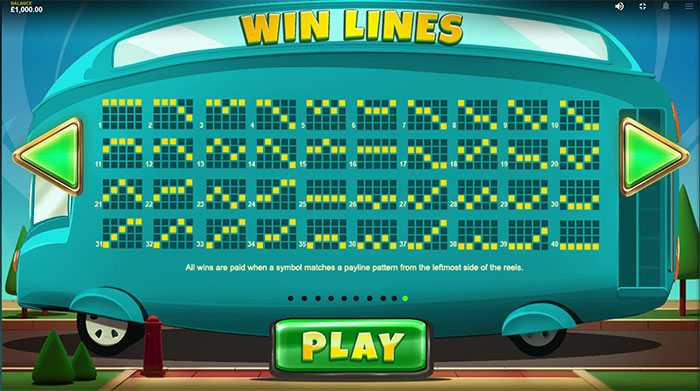 This slot game is set in the old town of England (which can also be termed as Blighty or simply Britain to some). The base game shows the scene of a busy road with a red light traffic man on the top of the reels. There are pedestrians acting as Wild Symbols on the corner of the road, on both sides, waiting for the light to turn green i.e. for the green man to appear. Once it does, any of the 15 Wild characters can start the short walk towards the other side of the reel, doling out wins and payouts as well as triggering bonus game features along on the way. The visuals are high- spirited, silly and fun in all its glory, with the background sounds giving the impression of a busy day in the life of the people living in Spin Town.

Spin Town is yet another great slot by the software provider - ‘Red Tiger Gaming’, which is a multi- award winning casino supplier for a while now. The main agenda of the software team at Red Tiger is to find innovative and exciting ways to balance the artwork and science of the casino game designs, which is a theory completely justified by the magnificence and Fun- tastical design of Spin Town.

Some of the other popular games by Red Tiger Gaming includes Slots like Lucky Mr. Green, Mystery Reels, Mystery Reels Megaways, Red Diamond, Reel Heist, Lucky Valentine, Crazy Genie, Lucky Wizard, Fortune House, Puss ‘N Boots, Jack In A Pot and much more. All these games can be operated on multiple platforms, may it be your Smart Phone (or Mobile), a Desktop (or PC), a Laptop or a Tablet. This software manufacturer uses the HTML5 technology and supports a multilingual system, thus making its casino games accessible to players all around the world.

In this game, multiple number of Wilds will gather at the edge of the slot reel, while the lights are red on the top of the game. There are about 15 different characters in Spin Town Slot that act as Wild Symbols. They start to cross the slot reel when the upper traffic lights turn green (or when the green man appears), allowing these Wild Characters to move 1 step per spin. Each of these moves/ steps can further lead to the activation of special Wild Features that are as follows :

Sleepy Wilds Feature : These are indicated by an old man and woman that might fall asleep during their walk (i.e. they tend to loosely act as Sticky Wilds), leading them to stay on the slot reel for long periods of time or game rounds.

Speedy Wilds Feature : These Speedy Wild Types are faster and younger and might move 2 steps at a time on each spin. They are amped up to go places !

Couple Wilds Feature : This is represented by two Couple Wilds, whom, if they met on the reel, tend to combine to turn in to a Wild Umbrella, thus sticking on the reels as Wilds, with a 2x multiplier when captured on a winning combination. Moreover, only one Couple Wild can be activated per line.

If a game player manages to land 3 ‘Rock ‘N’ Roll Symbols’ ( i.e. The Beatles Rock ‘N’ Roll) on the slot reels, then the ‘Rock ‘N’ Roll Shuffle Feature’ will activate four ‘Rockin' Wilds’ that can cross the slot up to a total of 10 times.

In the ‘Guardsmen’s March Feature’, the landing of 3 ‘Guardsmen Symbols’ (i.e. the Royal Guards are on the duty here) on the reel will activate the ‘1x2 Mega Wilds’. These Wilds can cross the reels of the slot game from both sides.

For the ‘Hooligan Advance Feature’, a player has to land 3 ‘Kick Off Symbols’ (in short, it’s time to enjoy the Football Hooligans), which will in turn trigger the occurrence of the ‘Hooligan Wilds’ on the reels. These Wilds are allowed to cross the slot reels from either side. Also, they tend to move as closely packed groups. 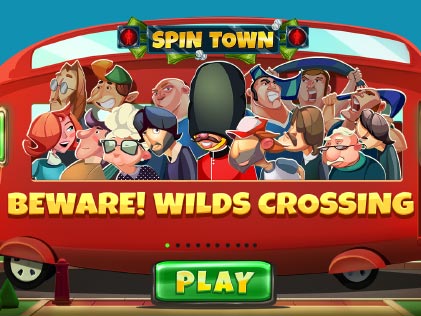 If you are looking for a fun slot that gives out multiple wins in a short amount of time, then this is definitely the right slot for you. Spin Town is a 5 reels and 4 rows video slot game with a low variance and a RTP of 96.23%. It is designed by the software manufacturer Red Tiger Gaming and has a total of 40 bet lines for you to win with. This game takes you to the middle of the road, in an old town of England, with pedestrians waiting on the side walk for the traffic man to turn green.

Despite not having a Free Spins Feature, it makes up for it big time by using multiple Wilds, that can further trigger no more than 3 Wild Features in the game. There are other Bonus Game Features in this game as well. The game is extremely fun to play for those who get bored easily and like to win continuously. The maximum pay out will be 400x your total stake, with the possibility of many small wins on your path. The features and graphics of the game are high quality and very lively. There is not a single moment in this ‘Spin Town’ slot game that is dull or uninteresting.