Overview of Temple of Tut Slot

Accompany 3 adventures on a quest to hunt for the King Tut's treasures. Take this adventurous journey to unveil and explore ancient mysteries to make sure you know why the Egyptians always say and firmly believe- Rich in Life, Rich in dead. We have, at some point or the other been smitten and fascinated by Egyptians and their tales. The Temple of Tut, an online video gaming slot by the software provider Just For Win and Mircrogaming will give you numerous reasons telling you why.

This video slot has a set up of 5 reels, 3 rows and 10 paylines which work- 'win both ways'. The Temple of Tut slot is playable on all devices, takes us back to ancient Egypt or precisely the era of King Tut is pretty simple to understand.

Features of Temple of Tut Slot

Teleport to Egypt via the Temple of Tut slot game which boasts of an ancient set up and brings alive the image of a pharaoh just looking at the video slot. The background score adds a much required mystical touch to the game thus making it even more interesting and intriguing to play. The symbols are intricately designed and being clad as adventurers make for interesting game play characters. The graphics are esthetic and provide the requisite amount of colour to the slot game, all in all making the game aesthetically pleasing to the eye.

To understand Temple Of Tut slot completely, choose the three dotted button, then click on the $ sign in a star on the right hand side of the screen. All the details have been explained comprehensively and facilitate clear and easy understanding of the entire game. The game in itself is easy to understand and the player gets a hang of it effortlessly. Perhaps the best part about this slot game is that all lines pay both ways, thus elevating the chances of winning. Take a look at all the buttons provided:

Spinning on the reels are a variety of symbols that depict ancient Egyptian mythology and 3 adventurers who have embarked on a journey to discover and find King Tut's treasures. The symbols have been explained below:

There are 4 standard reel symbols that include both high and low value symbols. They are- Ankh Symbol, Udajat or Eye of the Horus, Scarab Beetle, an image on a coffin or casket.

The female Archaeologist symbol is the most lucrative symbol which pays as much as the wild symbol and gives 25 times for 5 across the payline, which is equal to the wild symbol.

The man with a Monocle symbol

The man with the monocle is the second highest paying symbol, where it pays 10x for 5 across the paylines.

The male adventurer symbol pays the lowest out of the special symbols and pays 6 times for 5 across all the paylines.

The scatter symbol is represented via the name of the game- Temple of Tut and 3 or more scatters trigger new spins.

The wild symbol is symbolized by the word wild with the image of a pharaoh. It replaces all the symbols except the scatter symbol. The wild symbol is only present for the super reels features. During the base game, this is triggered randomly between reels 1 to 5 and each reel will have 50% stacked wilds for a better win.

Any reel from reel 1 to 5 can become a super reel and is triggered randomly during the main game. Super reels are different as 50% of such reels are stacked with wild symbols thus increasing the chances of a winning and winning big.

To re-trigger free spins, a player must land at least 2 free spin symbols or the scatter symbols during the free spins round in the main game. The free spins can be re-triggered if the following requirements are met:

Wild symbols can appear on reels during the free spins due to the super reels feature being active.

Temple of Tut has been jointly created by pioneering software providers Microgaming and Just For Win. Ever since Just For Win's inception in 2016, it has designed some of the most amazing slot games online. The developers focus on developing slot games that are interesting and entertaining, thus ensuring a fun gaming experience. Being relatively new in the gaming industry, Just For Win collaborated with Microgaming, a pioneering service provider for online games to ensure the highest quality possible. Both names synonymous with impeccable online gaming service does not fail to impress this time around too. 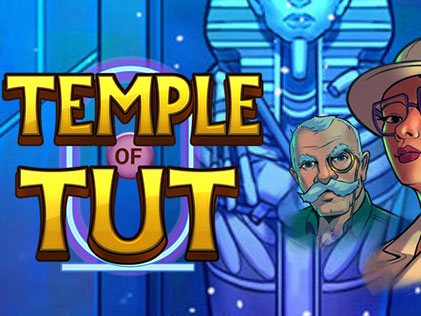 Hunt for King Tut's treasures and follow the trail of the 3 enthusiastic adventures as they set off on a quest in this new and easy slot game- Temple Of Tut. With a high theoretical payout rate and a return of 96.01% regardless of the bet level, it runs glitch free on all devices. What waits to be seen is whether it would impress the players with a medium volatility rate or not. Give it a try and decide for yourself! Visit any of the Just For Win powered casinos to start playing Temple Of Tut slot online.