The Golden Owl of Athena Review

Powered by Betsoft Gaming, The Golden Owl of Athena Slot will take you to the ancient Greece!

The Golden Owl of Athena Information

Overview of The Golden Owl of Athena

Developed and designed by Betsoft Gaming, The Golden Owl of Athena is a Video Slot featuring 5 reels, 3 rows and 10 paylines. Inspired by Greek mythology, this Slot machine will surely take you on a journey to ancient Greece where Athena's owl bestows upon you some massive rewards, ranging between Free Spins and Bonus Wins. By introducing some intriguing mechanics like 'Buy feature' and 'Double up', this online Slot machine will keep you on the edge of your seat while you aboard a flight to Athens. Either try the demo mode below to play for fun or head to any of the Betsoft Casinos and follow the Athena's owl to experience the classical culture of the ancient Greek civilization.

Features of The Golden Owl of Athena Slot

Set somewhere in Athens, the backdrop of this Slot machine brings out the pastoral beauty of the ancient Greek civilization. The fountains and gardens glittering in the sunlight, signal fires glowing with the dusk falling and the Parthenon shining bright in the extreme left perfectly picturize the Greek age of artifact. Being a product of Betsoft, this Slot game has done complete justice to the visuals and graphics just like its other gaming products.

High Value Symbols - The High Value Symbols consist of Athena (the warrior princess), Parthenon – (a temple dedicated to the Goddess Athena) and the magical trees. Out of the three, the symbol of Athena pays the highest on forming a winning combination by triggering 5 symbols on a payline.

Standard Reel Symbols –  The playing card alphabets like A, K, Q and J represent the Standard Value Symbols. A and K rewards you higher than Q and J.

The Golden Owl of Athena – This symbol is the keeper of sacred knowledge and acts as both Wild and Scatter Symbol. To unlock the wisdom of Free Spins, land three or more Athena' Golden Owl anywhere on the reel.

The Golden Owl of Athena Free Spins & Other Slot Features

1. Free Spins – The Golden Owl of Athena is the keeper of sacred knowledge and triggering 3 or more such symbols anywhere on the reels will unlock the wisdom of Free Spins. You get to win up to 20 Free Spins to harness the Owl's wisdom.

During the Free Spins round, one symbol would be chosen at random and if enough of those trigger on the reels then they'll expand to award you humongous bonus wins.

2. Double Up – Double up your winnings by pressing the 'Double Up' button after triggering any winning combination on the any of the 10 paylines. After clicking on the button, make a choice between if you want to re-gamble 50% or all of your winnings and choose head/tail. Flip the coin and if your selection wins then Athena's owl will fly you to a large reward. So turn on your gamble mode and take this risk as it's worth doubling up your winnings.

3. Buy Feature – This is the most interesting feature in Golden Owl of Athena Slot game and will come in handy for those players who are impatient to wait to follow the Owl and harness the wisdom of Free Spins. Use this feature to instantly buy 20 Free Spins without landing the 3 or more Athena's Golden Owl.

The Golden Owl of Athena Slot game is powered by one of the most popular online gaming software providers in the industry, Betsoft Gaming. This software technology has hugely gained fame for developing some of the most innovative 3D Video Slot machines. By launching ToGo in 2012, Betsoft became an early entrant to the mobile gaming industry and of late it also released the SHIFT environment which support cross-device compatibility. So, no matter wherever you are and on whatsoever device you intend to play, Betsoft ensures that your gaming adventure is never compromised in any manner. 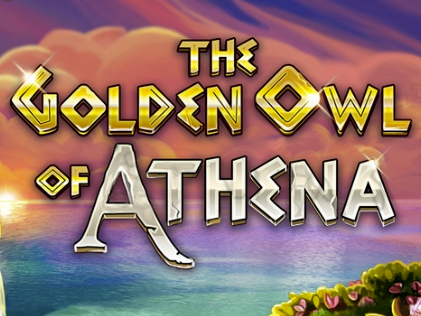 Built on the Betsoft SHIFT platform, The Golden Owl of the Athena Slot is developed and designed for cross-device compatibility. Apart from cross-device compatibility, this platform also ensures reduced file sizes and speed loading which further enhance the game-play and audio-visual experiences. By and large, this Slot game is interestingly designed in an under-served period of history and myth which can be visited on any device including desktop, mobile and/or tablet without compromising on the visuals and gaming experience.

Top Casinos to Play The Golden Owl of Athena

Rate The Golden Owl of Athena & Write a Review