Relive the Antonio Banderas role as Zorro in this Playtech slot offering!

Overview of The Mask of Zorro Slot Review

The Mask of Zorro is a 1998 American film, which bases itself on the character of the masked vigilante Zorro. This film was directed by Martin Campbell and brought Antonio Banderas to the forefront in one of his most-known roles. It also starred Anthony Hopkins and Catherine Zeta-Jones alongside. This Playtech offering is a slot game which bases itself on the film, even utilising the face of Banderas and the others as Zorro and supporting characters. Furthermore, the graphics within the slot are truly appealing too, so you’ll get to play a slot that has all of the appeal of the movie. Of course, with it being a Playtech offering, you’ll also get a nice selection of special features to benefit from during game play. So, if you’re ready to enjoy your time watching Zorro take on his villainous enemies, read on for more.

Features of The Mask of Zorro Slot

Perhaps the most stand out quality of this game from a first impression stand point, is the graphics that it features. They are some of Playtech’s best. The background of the slot contains imagery of a renaissance city, while the design of the game itself presents you with five reels and four rows. Additionally, there are a total of 40 different pay lines that you have the chance to place bets on. The lines are set in position as well, so you cannot customise them one way or the other. That being said, the visual impact that this slot brings with it is a great part to notice.

As well as the layout and the pay lines, the slot also incorporates the ability to change your bet level. This is easy to do, and you simply need to use the plus and minus buttons below the ‘Line Bet’ box. There, you can choose from values between $0.01 and $10 per line. Therefore, the maximum overall wager that you have the ability to place is $400 per spin. Alongside this, there’s the addition of the ‘Turbo Mode’ button, which will set the reels off spinning at a faster rate. And finally, as part of the setup there is the potential to use the ‘Autoplay’ button. With this, you can set the reels off spinning several consecutive times at the same bet level.

There are several different icons available to see on the reels of this slot game, from lower paying ones to higher paying additions.

You always know when a game is from Playtech, because it’s full of intriguing imagery and game play. The Mask of Zorro is exactly from this developer, which has been around since the year of 1999. Since that time, it has been designing and crafting online games and software for sportsbooks, poker sites, casinos and much, much more.

Alongside the game’s base mode, you will also find that it allows you to play through some special features as well. These ensure that you have a truly entertaining time while gaming with this Playtech offering.

The Mask of Zorro Slot – Conclusion 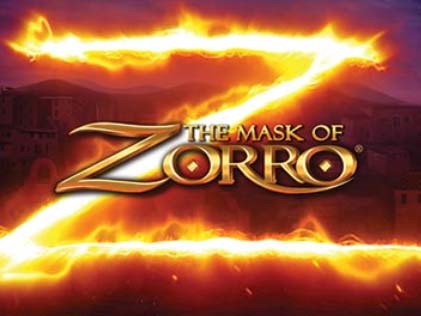 We recall watching the film version of this slot game and not being that impressed. However, this Playtech slot turns that opinion on its head. It’s thoroughly entertaining, incorporates high-quality graphics and animations and leaves you feeling truly thrilled to play it again.

Top Casinos to Play The Mask of Zorro Slot Review

Rate The Mask of Zorro Slot Review & Write a Review