A source of unbias review of Twinspin Deluxe Slot machine by NetEnt!

When Net Entertainment made their big comeback on the world gambling scene with their new video slots collection a few games stood out. One of those games was Twin Spin, which is still one of the most popular games among players from Net Entertainment. Every online player has tried this game at least once in his gambling sessions. Well, the designers at NetEnt decided it’s time for an upgrade so they took the basics of the slot and launched a new improved version under the name Twin Spin Deluxe. In general the two slots are very similar but with a few important differences. The linked reels feature is still in play, but at Twin Spin Deluxe instead of the 243 ways to win we can see the cluster pays design. You will need 9 or more identical symbols horizontally or vertically on adjacent reels to get a winning combination. With 6 reels and 5 rows Twin Spin Deluxe has a lot to offer, it’s up to you to give it a try and see which version you like more.

If you compare the two games you will see that the visual effects are identical. The animations are good, not too shiny which flow perfectly with the classic slots theme. This is one of the few online slots where the classic fruit symbols have a new modern design.

Just like its predecessor Twin Spin Deluxe doesn’t have a classic bonus feature. There is no wild or scatter symbol in the game and the slot uses the cluster pays design. The cluster pays feature means that in order to get a winning combination on the reels you will need to land at least 9 symbols vertically or horizontally on adjacent reels. The symbols in the game can come stacked on the reels which makes winning combinations easier to land. On each spin at least two reels in the game will be linked. This means that these two reels will have identical symbols. On each spin the Twin Reel Feature can be triggered. In this feature the two linked reels can expand to all 6 reels on the screen. This means that if you have one set of identical symbols on the two reels you will get the same symbol on the entire screen. This is where the biggest payout potential in the game is hidden. 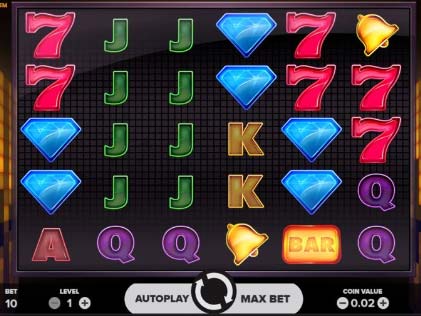 It’s great that Net Entertainment is experimenting with new designs for their old video slot games. Twin Spin was a big success among players and Twin Spin Deluxe is on the same path. The game has an attractive modern design with 6 reels and 5 rows and the cluster pays symbol. The Twin Reel feature perfectly complements the cluster pays design and gives a big payout potential to the slot. You can try both slots for real play and see which one you like more.