Before stepping into the auditorium & witnessing The Phantom

The Phantom of the Opera is a novel that was written by French author Gaston Leroux. While it was first published in 1909 as a serialisation, it was in 1986 that it gained additional fame, thanks to the musical stage version by Andrew Lloyd Webber. Since that time, there have been multiple incarnations of the phantom character, and now it comes to life in this Netent slot game. In actual fact, The Phantom’s Curse makes up a part of the Universal Monsters series, which also contains titles like Dracula and Creature from the Black Lagoon. This being the case, it’s another game that has seen Netent team up with Universal Studios, and it’s another huge success from the look of it. Of course, this developer always incorporates high-quality imagery in its games. However, it appears as though Netent has outdone itself with The Phantom’s Curse.

If you do decide to visit the theatre and watch the phantom come to life, then you’ll get to see it all happen on a five reel, four row interface. This is slightly larger than the standard online video slot layout. However, it also contains a total of 40 pay lines that you are able to wager on. These are fixed in position, so you cannot customise them in any way. As is generally always the case with Netent games, The Phantom’s Curse has some wonderful graphics on display. The background will take you right into the theatre, although the audience has yet to arrive.

You do still have the option to change around the wager that you bring into play per spin in the slot. You’re able to do this easily and choose between a bet level of one and 10 first of all. Also, you can select a specific coin value between $0.01 and $1. This means that with these at their highest levels, the game’s maximum overall wager possibility exists as $200 per spin. It also offers up a ‘Max Bet’ and ‘Autoplay’ button for you to utilise as you see fit. The latter of these gives you the chance to set the reels off spinning several consecutive times at the same wager level.

Upon the five reels, you’ll get to see the various different symbols of the game.

It is the company known as Netent that provides this slot game to the gaming world. This company has been in existence since 1996, bringing years upon years of experience to the sector. It’s a Swedish company and operates as one of the most successful online casino software providers around today.

As well as providing a base game for you to enjoy, this slot also incorporates a few different special features too.

The other bonus feature of this slot game is the Pick and Click addition. This triggers whenever the Stacked Phantom icon lands fully on reel one and the Stacked Christine is seen fully on reel five. In the first part of this feature, you have eight roses to select from. Some of the roses reveal coins, while others reveal blockers. Revealing a blocker will move you on to stage two. In this round, you have to choose one of three mirrors. This reveals a multiplier of times one, two or three. The coin win from the first stage is then multiplied by this amount to give you your pay-out. 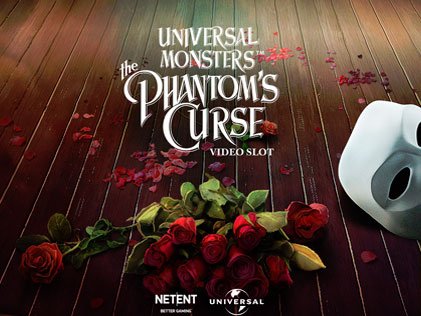 Anyone who is an avid fan of the theme behind this game will surely enjoy playing this. However, not only that, but it will appeal to all sorts of slot gamers. The graphics, overall gameplay and inclusive special features ensure that a fun time is had by all. It makes for another great addition to the Netent catalogue.