Spin in favor of the gods on this Playson Slot!

Viking Gods Thor & Loki is a video slot game coming from Playson. As the name already suggests the designers based this slot on Nordic mythology. Thor and Loki are the most popular gods and now we get to see them again on the reels of this game. The game play is interesting and the slot has a very attractive bonus round which is capable of producing big payouts. This is the main reason why many players decide to try their luck on the reels of Viking Gods Thor & Loki.

Viking Gods Thor & Loki is a 15 pay line slot game with 5 reels and 3 rows. Players can bet anywhere from $0.15 to $90 per spin. All you need to do is use the up and down arrows next to the Bet button. Once you set your bet you can use the Spin button or the Auto Play option to spin the reels of the slot. The symbols in the slot are well designed and the game has great animations which give it an attractive look.

The pay table in Viking Gods Thor & Loki starts with the three letter symbols. The payouts increase with the Pendant and two Dragon symbols, while the highest payouts come from the two Blue and two Pink Crystals. The game also has 3 wild symbols and two bonus symbols.

Playson is a very popular software provider with a big number of slot games in their offer. Their slots can be found in some of the most popular online casinos and they are constantly working on increasing their games portfolio. The Playson slots are becoming more popular across online players and are getting more loyal fans on a daily basis.

Viking Gods Thor & Loki has a very interesting bonus round. The Thor and Loki symbols land only on the central reel and can cover one, two or all three positions on the reel. If the bonus symbol lands in only one position two wild symbols are added on the two leftmost reels. With the bonus symbol covering two positions four wild symbols are added on the reels and if the Thor or Loki cover the entire central reel the free spins bonus is triggered with 10 free spins.

In the Thor free spins the Serpent Wild is guaranteed to land on every spin. You will need to pass three levels by collecting Blue Crystals on the reels. Each crystal will bring you one step closer to the next level. The Serpent Wild starts in a single position on the reels, the first level makes it a 2x1 wild, the second level a 2x2 wild and the third level a colossal 3x3 wild. Each new level will add 1, 2 or 3 free spins accordingly. 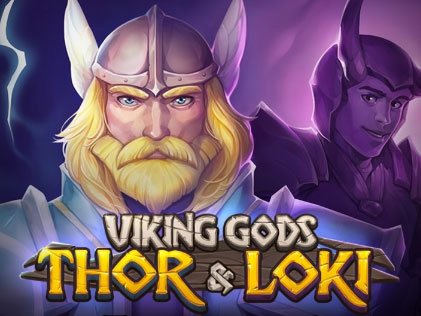 Viking Gods Thor & Loki is a very interesting slot game with a great bonus round. The pay table in the slot is rich and players can get a big number of wilds on the reels in several spins. You will just need luck to collect as many crystals as you can during the first 5 spins to unlock all the levels in the bonus. After that it’s smooth sailing from there as the wilds land and award big payouts on the reels.