Meet the Vikings and unlock some terrific bonuses as you spin the reels of this online slot!

This 5 reel - 3 - row video slot which expands to a 7 reel  4 - row orientation in the bonus round has been developed by NetEnt and features Vikings from the Nordic era. The symbols on the reels of the game include the Vikings; Floki, Bjorn, Lagertha and Ragnar Lothbrok in both stacked and the normal form. NetEnt has given their best in terms of music and graphics and has managed to keep up with the expectations that come along with the theme of the game.

Along with a thrilling gameplay which ensures fun, this slot game is also loaded with some ravishing bonuses. The best among these bonuses is Raid spins which offers as many as 78,125 betways in the bonus round. Some other features that you will come across in this online slot machine are - the Hotspot, shields, and scatter pays. Background of the translucent reels consists of  sea and a boat. While the foreground consists of grass that appears to move with the wind, the flag mark, the raven and falling snowflakes that add a lot to the theme of the game.

NetEnt has given their best in this slot game which reflects even from the minutest element designed in this online slot machine. First of all, the gameplay starts with a stunning introduction where a Viking in the wood leads to the reels of the game and sets the expectations right as the reels are revealed to the players. The translucent reels glide against the background of the sea with a war sign and a raven at either side of the reels, adding the much required shade of darkness to the game that the theme demands. The 3rd reel, which is the hotspot seems to be electrified and is minutely highlighted to set it apart from other reels thus bringing out its significance.

Falling of the snowflakes, the time to time moment of raven and the grass which seems to move as the wind blows add a real appeal to the gameplay. The music used has been rightly chosen and consists of the battle noises, cries of Vikings as they fight and the sound of arrows hitting the shields; which are all followed by a suspenseful soundtrack that is bound to take you the battle fields. With the help of these high quality sounds effects, you will be able to feel every moment that happens virtually both visually and audibly. Parameters of the reels change during the bonus raid Spins game and they expand to become 7 reel – 4 row with the glimpses of battleground which is another cherry on the cake the players are going to love.

Auto Spin : Players can use this option to spin the reels of the game automatically without having to use the spin button again and again. This autoplay option is quite advanced and lets you spin the reels any number of times from 10 to 1000 mechanically. It also gives you an option to choose if you want to stop this feature in certain scenarios like if you win raid spins or win or lose by certain amount.

Maxbet: On clicking on this option, the bet will be set to the max value of €100.

Spin : Click on this button to spin the reels of the game and enjoy the gameplay.

The low paying symbols used in the game include the alphabets - A, J, K, Q and the number 10. These symbols have been given a metallic texture and blood can be seen spattered here and there on the them which indeed makes them look like they are straight of the Viking era.

The high paying symbol used in the game include the images of the Vikings; Floki, Bjorn, Lagertha and Ragnar Lothbrok. These Vikings appear in two forms on the reels of the game. The stacked form that looks just like the other symbols and the full stacked symbols which take up to 3 rows of the same reel.

Wins are paid when matching symbols land anywhere on adjacent reels. Only the highest wins are paid

The Hotspot area covers the reel 3 and is slightly separated from the other reels with respect to appearance as it seems to be electrified. When a fully stacked Viking Symbol lands in this area, all the Viking symbols elsewhere on the reels of the game are transformed into that symbol leading to massive pay outs.

They are activated when a fully stacked Viking symbol lands on the Hotspot. After this, all the characters on the reels, transform into the same Viking and the wins are awarded. Hotspot feature always help you win through the scatter pays.

This feature can be triggered both in the base and the bonus game. The shields appear as a cluster of shields anywhere on the reels of the game and cover some of the symbols. When these shields are removed, they reveal one common symbol after which the wins are calculated.

This bonus round is triggered when three Raid Spins button on the land of the reels, the gameplay changes to a 7 reel 5 row game with 78, 125 betways.

Players get 7 Raid spins when three raid symbols land adjacent to each other anywhere on the reels 3, 4 and 5 respectively. During the spin if a fully staked Viking appears in the Hotspots, all the other Viking symbols on the reels of the game will change into it and bring along some massive wins.

This online slot game has been developed by NetEnt, which is one of the pioneer brands of the online gaming world. This software brand has already made its way to the heart of the online players after producing some invincible online slot and grabbing 30 prestigious awards like EGR Software Supplier of the Year 2018 .

With this slot game, Net-entertainment has once again played a masterstroke and has infused this online slot with a number of chances to win which is bound to leave the players mesmerized. Based on the ancient era and the famous Vikings, this slot promises a lot to the players, which reflects just from its name. The carefully chosen background music, the perfect symbol used along with the bonus features like Hotspot, Raid Spins and scatter pays, make this online slot a complete package for the players. 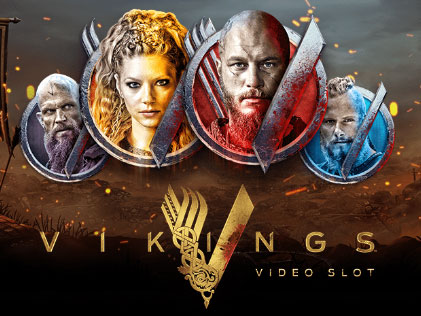 The game play of this online slot unfolds with the intro video where a ghostly figure can be seen standing in deeps woods. There is continuous thunder in the background, few candles and falling snowflakes that can be seen to the right of it. A vast sea can be seen in the background while a raven and a war flag and be seen to the right and the left-hand side of the reels respectively. The music used in the background consists of the shouting voices of Vikings, the noise of arrows on the shields and soundtrack that keeps the suspense going. Along with a lot of visual treats attributed to the high-quality graphics, the game brings equally enormous chances to win. Bonus feature like Hotspot, Scatter pay and the Raid Spins bring a number of chances to win for the players!.