Set Out on an Adventurous Voyage & Claim Rewards When The Vikings Go Berzerk.

Ever wondered how intriguing and thrilling going on a sea voyage would be? Somewhere you can take risks and sail the high seas! Well, with the Vikings Go Berzerk slot, the players get to experience the gush when they embark en route foreign lands with fellow vikings. Setting the bar high with its prequel, The Vikings Go Berzerk Slot does not disappoint. A video slot with 5 reels, 4 rows and 25 paylines that award winning combinations has everything that a player would love. Paying from left to right, the slot has amazing features and graphics. What makes Viking Go Berzerk slot more refreshing is that the players fight sirens instead of the usual marine monsters. Join the ferocious looking vikings on their sea voyage and get a bang for your buck!

The background in Vikings Go Berzerk is set against the sea milieu. The reels are placed atop a Viking ship with a metallic and wooden dragon on the bow of the ship standing tall like a figurehead. The two mermaids on either side of the boat, come alive when the reels spin. With impeccable 3D graphics and a soothing music playing in the backdrop that amplifies every time the vikings go berzerk or when a winning combination is achieved, this slot has effects and looks that totally vibe with its theme.

The slot game, Vikings go Berzerk has an array of symbols which help score a win on the payline starting from the left, if three or more of these symbols land in sequence on the reels.

Vikings - The vikings come across as being fierce and the graphics do full justice to making them look like dangerous pirates. These viking symbols have a high pay out.

Coins - There are four coin symbols, each made of the following metals: Brass, Copper, Gold and Silver. They are low paying symbols and represent coins from an older era.

Every time a player wins on a viking, the particular viking gathers rage. A bigger win results in collecting more rage attributed to the Viking. The viking goes into berzerk mode when it's rage meter fills up. In such a scenario, the players are rewarded with 7 free spins.

The berzerk vikings always win against the sirens in the free spin mode. The vikings turn berzerk when their meter fills up or by winning Ragnarok free spins.

The players playing for the first time have an edge, wherein one of the vikings rage meter will already be up to 50% full.

An unusual thing happens when the Ragnarok Rage feature is triggered. All the vikings go berzerk and switch to sticky wilds. Sticky wild simply means the wilds stay put in one place for the rest of the spin. This feature is activated during the golden treasure chest or just before the normal spin mode.

With numerous awards to its credit, Yggdrasil is a pioneering software company that has rendered its services to some of the biggest names in the online gaming industry. Employing the latest technologies to develop games, Yggdrasil is striving hard to carve a niche for itself in the world of casinos and slot games. Available across all major devices, Yggdrasil procured its license from the Malta Gaming Authority and is regulated by the Gibraltar gaming commission. Being associated with reputed gaming authorities, the players can rest assured that their security is in the right hands. 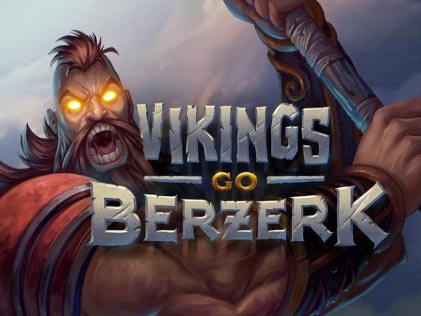 This Yggdrasil slot offers a medium level variance and a massive 96.1% return to the players regardless of their bet levels. Vikings go Berzerk is definitely worth giving a shot to experience thrill and fun like never before and who knows, the players might just get lucky. An HTML5 slot with impressive 3D graphics and unique features, the Vikings Go Berzerk is one slot that is sure to impress players worldwide. Compatible and running faultlessly on a variety of devices like IOS, Android or windows, this Yggdrasil slot is waiting for players to aboard the vikings ship and claim enormous prizes.