Get ready to Visit the Wild Circus and grab some big wins with 5 bonus features of this online slot!

Some symbols like bear, elephants and jester appear on the reels only during the bonus rounds and make the game play even more fun. The symbols have a cartoon look and vibrant colors. They glide on white reels with the glimpse of circus stage and red curtains in the background which adds to the appeal of the game.

Your are going to get lucky with this online slot as it is loaded with plenty of bonus features. The bonus features have been beautifully incorporated in the game and bring generous wins for you. Each round starts with a penguin fire canon and ends as the curtains of the stage are drawn to reveal the winnings. The symbols and the music are going to leave you in awe as you continue to spin the reels of the game.

Red Tiger has made a generous use of HD graphics in the game. The Symbols used have been given a cartoon-like and vibrant colors. Reels are white in color and glide smoothly in front of a circus stage loaded with red color. Fire cannon at the bottom right-hand side shoots the penguin to trigger bonus rounds, giving a surreal feel to the game. The use of alphabets like A, K, Q, J, and the number 10 makes sure the game play is interesting, yet simple at the same time. Background music used in the game goes well with the theme and is bound to take you back to your childhood.

The symbols like the hat, ball drums, juggling bottles that go in sync with the theme game are the high paying symbols used in the game. They have been vibrantly colored and standout vividly on the white reels against the red background.

Along with the symbols used in the circus, Red Tiger gaming has also used some alphabets and the number 10 in the game play. These symbols, though bring lesser wins, add to the simplicity of the game play and give it a more realistic look.

The penguin symbol with word Bonus written on it is the scatter used in the game. This symbol stands out distinctly on the reels and triggers the bonus features when three of them appear on the reels.

The game consists of two types of wilds symbols. The cheeky monkey which is the stacked wild and the Jester symbol which appears only during the Free Spins round.

Red Tiger gaming has been generous when it comes to bestowing bonuses over the players and has incorporated many fun bonus features in the game. The best part about this slot game is that although it has 5 bonus features, yet the game play is simple as all the bonuses are activated in a similar way.

After you collect the bonus the red curtains of the circus drawn and one of the following bonus stages begins. -

This bonus round starts with a cute bear riding his bicycle on a tightrope. You have to click on the screen to move him such that he collects a maximum number of coins and gems without breaking the rope.

Fire Breather is a pick and collects bonus in which you have to pick one of the three torches on the screen. The Fire breather at the bottom right-hand side of the game then shoots flames on the torch from his mouth to reveal the winning amount.

This is perhaps the most interesting feature of the game. At the start of the bonus round, you will see a bouncing ball which reveals the number of Free Spins you have won. A 2x multiplier is allotted at the beginning which is every time you get an elephant symbol on the reels during the Free Spins. At the end of the bonus round, you get a choice to choose between two symbols which can re-trigger this feature.

At the start of this bonus round, you have to select one out of the three boxes which reveal the number of Free Spins that you win. During these Free Spins, Jester randomly places wilds symbols on the reels, generating more winnings combinations.

This one is one more modification of the pick and collects bonuses. After the curtains are drawn, you will see the strongman on the screen. There are three balls each with a different weight and multiplier. If the strong man is able to lift the weight you chose, you move to the next round in which both the weights and the multiplied are increases. The multiplier goes on increasing as long as you keep choosing the weight that he is able to lift. When you choose a weight he is not able to lift, the bonus round comes to an end.

Along with these bonus feature, you may also win multipliers after getting three scatter symbols on the reels. If you are lucky enough, the penguin stops beside a random multiplier which will be awarded to you; without the need to play any bonus rounds.

And the feature you are going to love this online slot is that you can trigger more than one bonus games at the same time. Which means you may activate any 3 of the above bonus features. Just by by landing three scatter symbols and firing the penguin canon once, you get to enjoy with more bonus funds in account.

Wild Circus is developed by Red Tiger gaming, one of the well-renowned names of the online gaming industry. Established in 2014, this software has quickly excelled in a short period of time. The gaming standards that this software brand provides reflect from the fact that it bagged the EGR B2B Award for Best Innovation in Slots after competing with the giants of the online gaming industry like Playtech, Yggdrasil, and 10 others.

It was also nominated for the Best Innovation in Slots Provision, Slot Provider and Software Rising Star in its first year at EGR awards.

Wild Circus is another masterpiece from Red tiger Gaming which boasts rich graphics, vibrant appeal and a fun theme. The game is loaded with 5 bonus features which have been intricately designed and make the game a masterpiece. 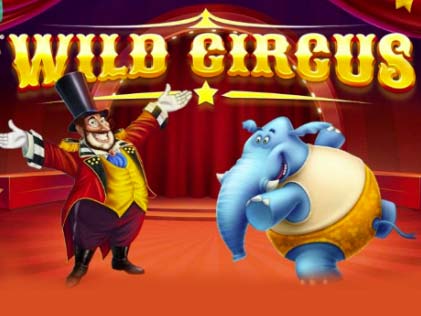 The reels of this online slot game by Red Tiger Gaming are set on a Circus stage. As the name suggests, this is a game based on circus which is a fun theme. Red Tiger Gaming has used vibrant colors and the symbols have been given a cartoon-like look, adding a fun factor to the game. Enjoy the bonus features as the Bear on Tight Rope, the Strongman, Fire Breather, Jester, and the Elephant and his spins bring massive wins for you when you fire the penguin cannon on the stage of this Wild Circus!