May the Nordic gods be in your favor on the reels of the Red Tiger Gaming slot, Wild Nords!

Wild Nords is a video slot game with a Nordic theme coming from Red Tiger Gaming. The designers of the game put in a lot of effort into the visual effects of the slot. The symbols have high details and the animations are modern. The slot has a vibrant choice of colors which give it an attractive look. The game play is fast and players can trigger several bonus features which can provide great payouts.

For Wild Nords the designers decided to go with a 20 pay line design, 5 reels and 3 rows. Players can bet anywhere from $0.20 to $500 per spin. The bet size is easily adjusted by using the Total Stake button. Once all is set to your liking you can use the Spin button or the Auto Play option to play the game.

The pay table in Wild Nords starts with the lowest paying card symbols which range from 10 to A. After that come the Bear, Wolf and Eagle symbols with medium payouts while the highest payouts come from the three wild symbols. This slot is one of the few online slots which don’t have a scatter nor a bonus symbol installed.

Wild Nords is a video slot game coming from the great portfolio of Red Tiger Gaming. This is a popular software provider in the industry with a big number of slot games. Their slots can be found in some of the most prominent online casinos in the industry.

As most of their other slots Red Tiger Gaming designed Wild Nords to be fully compatible with all mobile devices. You can easily play this game from your Android or iOS device, directly from your mobile browser. You won’t need to install any additional software to play the game.

Wild Nords has a very unique and interesting set of bonus features. On any given spin the Bear, the Wolf or the Eagle can appear next to the reels. Once one of these animals appears it will summon the corresponding symbols on the reels. This is called the Animal Feature. The summoned symbols can also remain in their position and a free re-spin may be awarded.

The other features in the game are triggered by the wilds Bjorn, Astrid and Rolf. When any of the wilds lands on the reels all corresponding symbols to the wild will be transformed into extra wilds and will be held in place for one free re-spin. Bjorn corresponds to the Bear symbol, Rolf to the Wolf symbol and Astrid to the Eagle symbol. If during the re-spin more matching symbols land on the reels another free re-spin will be awarded. The feature continues until no more matching symbols land on the reels in the re-spins. 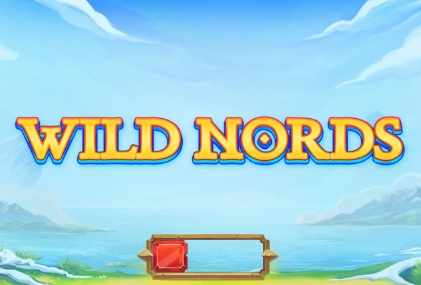 Wild Nords is a great video slot game from Red Tiger Gaming which has a lot to offer in every way. The visual details in the slot are great and you will immediately be attracted to the game. The pay table is a bit weak which might set some players off, but the bonus features certainly make up for this. The both ways win design along with the animal and Wild Nords features can produce some great payouts even up to 1.000 x stake. The best part about the features is that payouts are calculated after every re-spin. So if you get a big number of wilds in a single spin you know that you will also get a big win in the following re-spin. The great features in Wild Nords are reason enough to give this slot a try for real play at any of or recommended Red Tiger Gaming Casinos.