Wild Seas Slot was launched  by ELK studios on January 11, 2018 and is all set to take you back to the golden era of Piracy. Take care of all your valuables and get ready to take a voyage on the Caribbean Sea with – Anny Bonny. She is the courageous sailor who is set on a journey to restore the treasure to all the innocent inhabitant of the island and is going to be with you, as you help her complete her mission.

The 5 reels of this slot are set in the Caribbean with images of an island and a human skull in the background, which brings out the theme really well. The symbols used in the game include sailing ships, pirates, treasure chest and the coins .The bonus rounds of the game that start as you 'break the convoy'  and 'loot the treasure' and have been beautifully designed to give a surreal gaming experience as you continue playing the game.

The game play of Wild Seas Slot is set in the Caribbean sea with the glimpses of a beautiful island by its side. An image of a residual human skull - which has been long used to symbolize pirates, rightly brings out the theme of this 5 reel 4 row slot game by staying in the background. On this voyage, you will be guided by Anny Bonny who is a successful sailor. You will be a on a lookout for treasure chests of other pirates that you have to return to the innocent islanders, as sworn by Anny. But hey! Be aware of the opponent - English, French, Portuguese captains and Pirate ships or the barrels that can take away your treasure. The high audio visual effects and the background music are perfectly blended in this slot by ELK studios and does complete justice to the theme of the game.

The reels of Wild Seas slot game has about 178 pay lines which are all paid out from left to right. if you have more than one active pay line, you get paid out for the highest active bet-line. To have a better understanding of these wining scenarios, have a look at the symbols that are spread across the 5 five reels and 4 rows of this exciting game and constitute the winning combinations-

The game play of Wild Seas Slot is divided into two modes – normal mode and the bonus mode which brings along with itself  massive wins for you. The bonus mode of the game is further divided in to two levels  which have been explained below-

This is the first bonus round of the game which gets activated when two Wild Seas flag appears on the reels. The starting of the round is marked by a convoy of  4 ships on reel 5 that move towards the left. One of the captains is also randomly chosen as the opponent and replaces all the other captains on the reels

Along with these ships a pirate ship (of the opponent captain)  appears and attacks the sailing ships on the same reel – to the right or left. Until two hits these ships stay as damages ships but on the third hit they sink and get replaced by a treasure chest which stays as a sticky wild. This bonus round comes to an end when no sailing ship sinks remain on the reels.

ELK studios, the gaming software behind this game was founded in Sweden in 2011. This software is known for its limited but high quality games that it provides as it focuses on quality rather than quantity. The brand has been successful in proving its motto right which is reflects from the fact that the EGR Game of the Year – Wild Toro is build by this online gaming software. ELK Studios also provides world class mobile games, so you can rest assured that all the games you play at this casino can be accessed on your mobile as well! 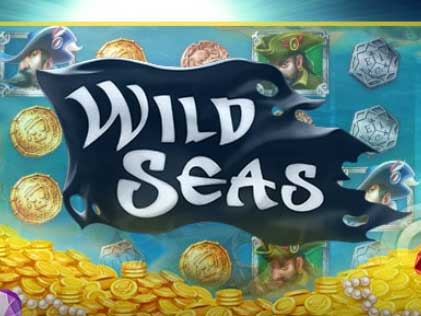 Wild Seas is an engrossing game, once you launch the game and start spinning the reels, you will soon be lost in the Caribbean sea looting the treasure and fighting the pirates for the good of islanders. The game gives you many chances to win, attributed to its 175 pay lines.

Once you Break the Convoy and Loot the Treasure for the islanders by fighting with the pirates, you get rewarded with abundant of bonuses in your account when the voyage comes to an ends.