Whisk away to the picturesque valleys of Asia with this latest launch by Quickspin!

Overview of Wins of Fortune Slot

Win of Fortunes is featured slot by Quickspin with reels like no other slot. Set in Asia in a scenic valley, players will encounter mythical characters on their journey to win a fortune! This is a slot that starts with uneven reels, and as players capture re-spins, there are more ways to win as the number of spaces symbols can land on increases on the reels and every win is rewarded with a re-spin building up to a mega bonus round.

Overall, a 5x3 slot has 15 spaces for symbols, but Wins of Fortune has 19 places, and this can grow into a massive 5x5 slots with 24 spots on the reels for players to land symbols and combos!

This is not a traditional slot with pay-lines, and rather it is based on no pay-line wins. That means symbols line up from left to right and pay-out if they are on adjacent reels. The symbols do not need to be next to each other, but they do have to start on reel 1.

For instance, if you land a pink emerald on position 1 on reel 1, then position 3 on reel 2, and position 4 on reel 3, just because these symbols are on adjacent reels, this means you will be paid out for a 3-symbol combination.

With reels 3, 4 and 5 having extra spaces for symbols, this makes 3, 4 and 5 combination wins much easier to land.

Features of Wins of Fortune Slot

An amazing setting for a brilliant slot – you will be whisked away to the picturesque valleys of Asia where luck and fortune virtually have the same meaning.

As you begin to get the reels spinning, this game sometimes just kicks straight into action with combination wins triggering re-spins and reels start to expand vertically giving you more places to land symbols.

Every time you land a combination win, the re-spin feature will kick in. That means when you win, you get a free spin. If you keep on winning, and trigger the ‘Mega Re-Spin’ and win again, then you will be playing on reels where every spin the wins stick giving you a monstrous pay-out!

As you begin to get the reels spinning, this game sometimes just kicks straight into action with combination wins triggering re-spins and reels start to expand vertically giving you more places to land symbols.

Every time you land a combination win, the re-spin feature will kick in. That means when you win, you get a free spin. If you keep on winning, and trigger the ‘Mega Re-Spin’ and win again, then you will be playing on reels where every spin the wins stick giving you a monstrous pay-out!

Free spins in this game are basically the re-spins. You begin with the base game which is 5 reels x 3-3-4-4-5. When you land a win, there is re-spin and the reels change to 3-4-4-4-5. The re-spins will only stop if the next spin does not produce a win.

As a result, if you win on the second re-spin the reels expand again.

This would mean you have won 4 re-spins in a row. Once you have 4 straight re-spin wins, then you qualify for the bonus feature, which is the ‘Super Re-spin’ covered in our ‘Bonus Rounds’ section. This where we also cover the additional bonus feature where ‘All Wins Stick Until No More Space is Left’.

You will have no problems spotting the Wild symbol on this slot as literally has words ‘WILD’ written on it in large writing. The wild can sub for any other symbol on the reels. This gives all symbol combinations an extra chance of connecting winning combos across adjacent reels.

This game is so jam packed with fun and combination wins that Quickspin saw no need to have to add scatters and multipliers. In way, the combination wins are scatter wins because symbols just must land on adjacent reels to pay-out without being fixed to a pay-line or any position.

In effect, this means the only difference between combination wins and scatters on Wins of Fortune is that traditional scatters do not need to be on adjacent reels to activate.

On Wins of Fortune, the ‘Super Re-spin’ is the bonus feature. Players can reach this bonus for the price of a single spin. If on a paid spin you land a winning combination, a re-spin will be given, and re-spins do not stop until the reels fail to produce a win.

If you land a win on the ‘Super Re-spin’, then the ‘All Wins Stick Until No More Winning Combinations’ round kicks in. That means you just sit back and watch the reels pay out win after win until the reels are completely full and cannot spin.

The final bonus feature is ‘Locking Symbols’. If on the 4th re-spin you land a 5 symbol combination, then rather than the ‘Super Re-spin’ the reels will spin and lock in the symbols from the 5 combination win on every spot on the reels – this gives a massive win across all all reels.

With so much action on this slot, there is absolutely no need for a progressive jackpot. Just the fact that the reels expand, and there are re-spins after re-spins with the chance of having sticky wins on the reels where players will just build up a mountain of cash.

Why Play Wins of Fortune Slot? 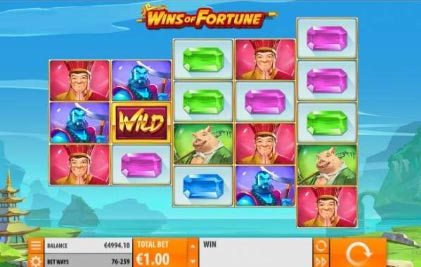 The question is why not play this slot? Anyone that has seen this slot on their online casino has been over to try it, and it is an extremely catchy game. Its idea is simple once you get used to it. At first, most players may look at Wins of Fortune and like the idea of the reels being different unware of what this slot is about to throw at them.

When wins hit the reels with no particular order because there are no pay-lines, and then the reels start re-spinning for free, players are instantly in love with this slot.

It is just one of those must try slots and it is not too expensive to play. What is super exciting is contemplating the possibility of re-spinning 4 times in a row and getting that final mega re-spin, so all winning combinations start to stick to the reels. Once this happens, you just watch this slot literally throw cash at you.