Enjoy your gambling journey by spinning the reels of Reel Heist Slot Game!

Reel Heist is a very fun game based on cops and robbers. Everything is nice and quiet in the neighborhood until the robbers decide to stir things up. But don’t worry our hero cop is on the job and he’ll catch the robbers as fast as possible. Witness the real live chase across the reels as the robbers are trying to make a run for it. Reel Heist is a very fun game with great animations and a very fast game play. This is one slot where you will never grow tired of the action on the reels.

The designer behind the Reel Heist slot is Red Tiger Gaming. This provider has a number of great games in their offer even though they aren’t a popular name in the online gambling industry. Still their video slot games are fun to play and can produce some nice payouts.

Reel Heist has a modern design with 5 reels, 4 rows and 40 active pay lines. To play the game you will need to place bets anywhere from $0.20 to $500 per spin. This is easily regulated with the Bet Button. After you place your bet all you need to do is to hit the Spin button or use the Auto Play option for up to 100 auto spins.

The main symbol in the game is the Cop which is the wild symbol. There are also 5 Robber symbols and each one has a random prize attached. The high paying symbols in the game are the Police Badge, Police Hat, Hand Cuffs and Sun Glasses. The low paying symbols are the classic card symbols.

You won’t need to stay indoors to be able to enjoy the action on Reel Heist. The game can be played from any mobile device powered by Android or iOS. All you need to do is launch the game from your mobile browser without downloading any additional software.

Reel Heist doesn’t have a classic bonus round. Winning combinations on the reels are formed across the pay lines but the big payouts can come from the robber symbols. There are 5 different robber symbols which can land on the reels. Each one has a random prize attached ranging from 10 to 2.000 x stake. Each time a robber comes on the reels the cop will be there in a few short spins. This is when the chase happens. The cop will start chasing the robber across the reels. There can also be several robbers on the reels at once and the cop will try to catch them all. If they prove to be too fast for him he can throw his baton at them and stun them. This way they will remain in position until he catches them. Once a robber is caught the random stake prize is awarded and the feature continues until there are no more robbers on the reels. 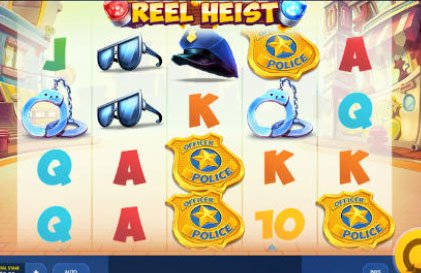 Reel Heist truly is an original and interesting video slot game. We don’t think we have seen another slot with a similar bonus feature like this one. It’s a bit strange that the game doesn’t have a classic free spins bonus, but the robbers can provide more than decent payouts. Most of the robbers on the screen have prizes of several hundred times bet so you can easily win big by catching one of them. This feature is filled with action and is sure to keep your attention on the screen for hours at a time.