Based on the popular novel – 'Three Musketeers' this is a 5 reel 4 row slot, developed by Red Tiger gaming. The game features three musketeers -  Porthos, Athos and Arames, who are all set with their swords to help you win.  Each of these three musketeers bring along different bonuses for you viz Bar Bonus, Wheel bonus and Offer bonus. The three friends stay at the extreme right-hand side of the reels and the progress bar belonging to each of them gets filled up a little whenever they appear on the reels. Once the progress bar for any of these is filled up they bring bestow generous bonuses over you.

If you have decided to play this game after being fascinated by the theme of the game which is inspired by famous novel 'Three Musketeers' by Alxeandre Dumas. And, you imagine the musketeers fighting in a French town with swords in their hands, the graphics of the game are going to do complete justice to your expectations.

The green background, the archaic attire of the musketeers and the other symbols used like swords, ancient pints of ale, symbols used in playing cards (spaded, clubs, diamonds and hearts) bring out the theme really well and are going to take you back in time making sure you return only with abundant funds in your account.

The green color adds to the appeal of the game and if you are the one who already has in mind, the French town in Dumas novel, you are going to fall in love with this game all over again. The music used does wonders and adds more fun to the gaming experience.

Many symbols have been used in this game that work together to add to the look and feel of the game. The standard symbols although do not hold any special significance but contribute immensely to the winning combinations across the 40 paylines. These symbols include three swords against a red background , huge pints of ale, hats, swords, an emblem embedded on a gold coin, and some symbols out of the deck of playing cards like, diamonds(green), spades(blue),  hearts(red) and clubs (yellow).

Apart from these, some special symbols have also been used in the game that bring enhanced winnings for you, they include -

These are the most important symbols in the game on which the entire theme of the game is based. The three musketeers appear on the reels time and again adorned in ancient traditional attire and add to your winning possibilities.

Prothos is seen smiling in a red dress with a brown hat and red hair, while Arames is dressed in a blue dress and hat, with a grin on his face. The third friend Athos is in a green attire ready to jump in to the battle.

These musketeers only acts as collectibles since each time they come up on the screen, the progress bar corresponding to their icon is boosted by different amounts, depending on the reel on which they appear.

All the three musketeers contribute to help you get some big wins by your side by bringing their own unique bonuses for you. Each time a musketeer appears on the reels it contributes to the progress bar on the extreme right hand. Bonus round gets started when progress bar for a particular musketeer is filled up. One bonus round is attributed to each musketeer and all three of them have been described below -

The Three musketeers slot is a 5 reel 4 row video slot with 40 paylines which is developed by Red Tiger gaming. This gaming software consists of a team of veterans and produces games that have superior 3D and 2D graphics.

The software brand develops games across all the gaming categories and has become one of the leading suppliers in Asia and Europe. It continues to expand its customer base at an impressive rate with its motto of leading the industry by pushing the limits and developing high end graphics.

Red Tiger gaming powers a large number of casinos, some of them being Betsson casino, Slots million casino, PokerStars and many others that continue to serve infinite satisfies players with its stunning games. 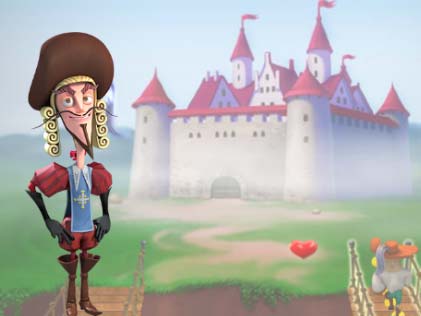 This is an interesting video slot based on three musketeers namely Porthos, Aramies and Athos, right out of the world famous novel of the same name by Alexandre. The archaic set up of the game and the perfectly chosen attires of the three musketeers are bound to take you back to the French town where these musketeers toiled. The symbols and the music used are going to make you fall in love with the 5 reels of this game that stand out beautifully against the faded green background perfectly blending in completely with the theme of this video slot game.