Overview of Coins Of Egypt Slot

Coins of Egypt launched in March 2018 by Net Entertainment (NetEnt) is a 5-reel and 3-rows online slot game with 20 payable lines. It brings us back to the era of Egyptian cultural history reminding us the importance of pharaohs, chest seals, chests and of course coins ! It attracts players with its random rewards, collection of payout symbols in the form of Egyptian gods and goddesses, Wild, Collect and Scatter Symbol, Pharaoh Coins and unlimited Free Spins for the gamer. The best part being the debut of the Pharaoh Coins Win Feature offering ‘n’ number of free spins to the player until they fill their treasure chests with a particular number of seals.

There are 1-10 levels each having a fixed number of 20 coins per level rule, that can be used with inter changeable coin values ranging from 0.01 to 1.00 i.e. 20p to £200. Built in NetEnt ’s usual HTML5, it is operable on both iOS and android along with desktop computers. Play Coins of Egypt with a free demo first to make sure you are better prepared to gain huge payouts when playing Coins of Egypt for real money.

Features of Coins of Egypt Slot

The slot game is set within an ancient Egyptian temple with Egyptian gods Anubis and Horus on either sides of it. From intricate Ruby Eagle and Emerald Snake Seals and Chests symbolizing treasures (in this case seals or coins) to the desert insects, palm trees and scarab beetles, the view is indeed a site to behold. In terms of soundtrack i.e. the ancient Egyptian background music along with other sound effects, NetEnt has out done themselves. True to its rich Egyptian theme, the visual takes us to the golden era with its sandy and brown color appearance and pharaohs depicting their higher order by being coins that can be collected and offers up to 2 to 15 times the bet amount. It is highly recommended to those who loved learning about the ancient monarchs and their history when in high school while the others can come just for the treasure.

Although Coins of Egypt has a fun and user-friendly interface, it can be tricky. From varying coin size to auto play tab, it is a bit of a read. But, no worries, it has all been depicted quite thoroughly on the slot panel as well as below:

BET: On the slot panel, at the bottom of the game, on the left corner, it’s written 'BET’, which can be adjusted using the LEVEL icon that ultimately decides the desired betting amount. For each level, there is a different maximum or minimum amount that can be adjusted according to the player’s wishes. In accordance to Level 1 to Level 10, the range would be from 20p to £200.

COIN VALUE: It is located at the bottom right side of the slot panel. It ranges the amount of the bet from 0.1 to 1.00 part of the total eligible amount deciding the maximum and minimum value of the bet placed at each level. The initial amount at level 1 is 20p, being the lowest and £20 the highest, which increases with each level up but, it can be reduced to the lowest possible amount using the COIN VALUE option.

AUTO PLAY: Continuously spinning and playing may lead you to not actually enjoying the game. To avoid this, NetEnt introduced the AUTO PLAY option in order to let the players have fun while the number of spins can be fixed and automated. The players can choose from 10 to a total of 1000 spins if they wish.

MAX BET: To jump to the maximum bet amount of £200 that can be placed or the maximum level of difficulty to be enjoyed, all you have to do is click on the MAX BET option on the slot panel right next to the spin icon.

Apart from these, there are other icons and keys that are self-explanatory like the sound icon showing a speaker, a question mark, pliers or arrow keys. There is another icon namely 'AUTO' which again represents the Auto Bet feature. There are +/- signs to increase or decrease the amount or level to help you along the game as well.

Scarab (Low Payout Symbols): There are 5 different types of scarab beetles- the blue beetle, the red beetle, the green beetle, the yellow beetle and the purple beetle. All of them are designed magnificently and each hold a unique payout amount. With various combinations of these scarab beetles, there is a chance to win low payouts, depending on the pay line formed and the pay table.

Egyptian Gods and Goddesses (High Payout Symbols): There are 5 another symbols comprising of ancient gods and goddesses. These being - Anubis (The Jackal God), Wadjet (or The green one), Bastet (The Cat Goddess), Isis (The Winged Goddess) and the Scorpion. All of these offer a huge payout depending on the pay line and the pay out.

The Wild Symbol: A Golden Fly or a golden scarab is the wild symbol for Coins of Egypt substituting all the symbols except the Scatter Symbol, Chest Seals and the Collect Symbol.

Collect Symbol: The collect symbol is in the form of a Pharaoh Coin introduced in the Pharaoh Coins Win Feature offering payout up to 15 times the bet amount.

Chests Seal: There are 3 chest seals- The Ruby Eagle, The Emerald Snake and The Golden Cat Seal. They are portrayed as an emblem on the three respective treasure chests. Large number of coins can be collected in these chests. Also, they work as an essential part to start or end the free spins.

Scatter Symbol: The scatter symbol resembles that of Hermione Granger’s Time Turner piece or a Complex and Colorful Saturn if you haven’t seen Harry Potter yet (Seriously, Why?) Appearance of 3 scatter symbols on the odd number reels can trigger free spins.

The bonuses and rewards in Coins of Egypt are extra-ordinary and unique and amount to a huge sum in total winnings at the end of the game. It offers various parameters that can lead to huge payouts. There is the Wild symbol, the Scatter symbol, the Collect symbol and don’t forget the Jackpot. The list keeps piling on. Let’s take a look on the aforementioned list:

Wild Symbol: The wild symbol in Coins of Egypt is depicted by a Golden Fly or a Golden Scarab beetle. It substitutes for all the other symbols exclusive of the scatter symbol, the collect symbol and the chest seals. It offers the highest payout among all others when placed in a certain combination depending on the pay out table. The Jackpot of 3000 coins is offered through the golden fly when displayed a certain number of times.

Pharaoh Coins Win Feature (The Collect Symbol): This is the most interesting and highly payable feature of the game. In the game, 1 to 3 of these coins appear on the slot reel 1, 2 and 3 (one coin each reel) with each spin, making you eligible to win from 2 to 15 times the bet amount placed during each round. During the game, the coins get collected after each spin and if the pharaoh coin appears of reel 5, all the collected coins are added to the winnings of the on-going round irregardless of the pay lines.

The free spins are in part divided in two halves in this particular game. The first part being the scatter symbol and the second being the chests seals. This game is quite different from it’s predecessors and frankly quite genius, in turn making it something to look forward to.

Scatter Symbol: If 3 Scatter Symbols or the Time Turner as we mentioned before, displays on reel 1, 3 and 5, it can set-off the free spins feature of the game.

To start of, all the coins displayed during the round that triggered free spins will be added to the respective chests. In the mean time, up to 3 coins can appear on the reel 1, 2 or 3 ( one coin per reel) leading to the addition of their coin value to the consecutive chests.

Chest Seals Symbols and Coins-Seals Collecting Chests: Each seal represents a certain chest and is only displayed on reel number 5 during the free spins. During each spin, one of the three chest seals appear on reel 5 and is added to the corresponding chest. Once 3 similar chest seals are collected, the coins occupied by the respective chest are awarded to the player and the free spins end. The awarded winnings are added to the round that triggered free spins. Additional chest winnings or free spins cannot be won during free spins.

Powered by NetEnt, Coins of Egypt was launched in March. NetEnt is no stranger to online gaming and is easily considered one of the best software providers in the market. Despite being smaller, they have left no stone unturned and keep launching new games on a daily basis. With their amazing graphics, high and low volatility games and newest concepts, NetEnt is reaching the precipice of becoming a household name for all the online casino players around the world. They are the premium gaming solution providers for many popular online casinos and have recently increased their jurisdiction in US along with Europe. They are expanding their reach and have also launched Branded Games that turned out huge successes such as Scarface and Robin hood, giving popular software providers like Microgaming and IGT, something to talk about. There are other popular games by them as well namely Starburst, Gonzo’s Quest, Twin Spin, Jungle Spirit and many more. 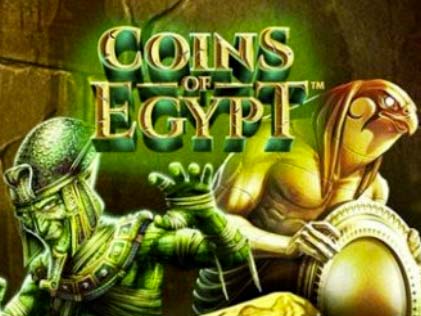 Coins of Egypt Slot launched by NetEnt takes players on a faraway journey to ancient Egypt where among sand dunes and palm trees lies an Egyptian temple. Joining on the hunt for the golden coins and chests filled with treasure are various gods and goddesses accompanied by scarab beetles and scorpions to make the journey scary and authentic. It is a 5-reel, 3 row slot with 3000 coins as the jackpot along with highly creative wild, scatter and collect symbols. It has free spins and a chest collecting the treasure you came for. It also features a special addition called the Pharaoh Coins Win Feature making your experience worthwhile. It has 96.67 % RTP rate with low volatility. It’s an adventure of a lifetime, reminding you of the riches the ancient times held and the possibility that there, in middle of the dessert, a treasure is waiting for you to dig it up !