Phantom of the Opera Slot Review

Make way towards riches with an unbiased review on Phantom of the Opera Slots game.

Phantom of the Opera Slot Information

Overview of Phantom of the Opera Slot

We’re sure that when Gaston Leroux wrote his world famous novel he didn’t expect it to become as popular as it is today. Over the years this novel served as a foundation for many TV adaptations and musical shows. Still the novel reached its top level of glory in 2004 when a movie adaptation of the 1986 musical came to the big screen. The movie was a big hit across cinemas worldwide and it served as a foundation for the latest Microgaming slot The Phantom of the Opera.

Microgaming really did an outstanding job with this game. If you compare The Phantom of the Opera with some of the other new slot releases from Microgaming you will see that they are worlds apart. The designers of the game paid a great deal of attention to every aspect of the game creating a top of the line Microgaming slot. The visual effects in the game are outstanding, perfectly complimented by state of the art animations. The game symbols are borrowed from the movie as well as some of the background sounds. All of this combined resulted in one of the visually best slots to ever come of the Microgaming production line.

Features of Phantom of the opera slot

It would be so wrong to put in so much work into a game and give it an old fashioned pay line design. This is why The Phantom of the Opera features a modern 243 ways to win design with 5 reels and 3 rows. As in many other 243 ways to win slots from Microgaming the bet size ranges from $0.30 to $15 per spin. This makes The Phantom of the Opera the perfect slot for all of those high roller players out there who bet big in order to win big.

The Phantom of the Opera is a modern video slot game which can be found across all Microgaming casinos. Players can try this game from their mobile device by using their mobile browser. You won’t need to download any additional software and you’ll be ready to play the game instantly.

The main symbol of the game is the Wild which substitutes for all other symbols except the Scattered Mask and the Envelope symbol. The higher paying symbols of the game are the characters from the movie like the Phantom, Carlotta, Raoul, Christine and Don Juan. The lower paying symbols in the game are binoculars, letters, roses, scrolls, poison and the monkey.

All great operas have an element of surprise. Keep your eyes peeled to the reels and watch out for the falling chandelier. Once it falls from the ceiling the chandelier bonus can award up to 3 wild reels on the screen. Also keep an eye for the fifth reel. At any given spin a letter symbol may land awarding cash prizes of up to 20 x stake.

The culmination of every opera is in the main act. In this case the main act starts when 3 or more scattered masks fall anywhere on the reels. This will trigger the Bonus Selection where players can choose among 3 outstanding bonus rounds.

Music of the night free spins

In this bonus feature the player is awarded with 10 free spins. On each spin you can trigger one or more of the four random bonus features. Players can get up to 5 extra free spins, win multipliers of up to x4, anywhere from 3 to 5 random wild reels or randomly placed wilds across the reels.

This is a cash pick and win bonus with 3 sets of levels. You will need to pick different masks in order to reveal cash prizes, extra picks or level ups. On the first level you get 3 picks, on the second level extra 2 picks and on the last level extra 1 pick.

All I ask of you free spins

In this feature the main characters in the game, Raoul and Christine act as extra Dancing Wilds. On every spin in the feature they will dance around the reels and depending on their position they will award extra features. Players can get x3 multipliers, wild reels or 2x2 wild blocks.

In terms of payouts The Phantom of the Opera has a lot to offer. The modern game design along with the great bonus features can produce massive payouts. The maximum payout in the game is set at $116.000 which on the maximum $15 bet translates to a staggering 7.733 x stake payout. 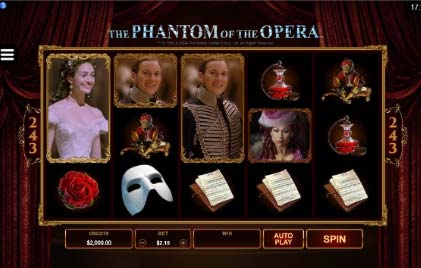 It’s been a long time since we’ve had a chance to see such a great video slot game from Microgaming. The designers really outdid themselves this time and managed to create one of the best video slot games ever. The Phantom of the Opera has a lot to offer in every way starting from the visual details up to the big payout potential. The game is filled with bonus features which are sure to keep you interested in playing for many long hours.

Top Casinos to Play Phantom of the Opera Slot

Rate Phantom of the Opera Slot & Write a Review