Age of the Gods Slot Review

Chase the jackpot on the reels of Age of the Gods!

Age of the Gods Slot Information

Overview of Age of the Gods Slot

Age of the Gods is a video slot game coming from Playtech. This is the first of the Age of the Gods series slots which can be found across all Playtech casinos. As all of the other slots from the series this is a progressive jackpot slot where players can win over $500.000 in a single spin on a minimum bet. The game play is fast and exciting with frequent winnings, but the real fun starts when the free spins bonus is triggered. All you need is a little luck on your side and the blessing from the gods to walk away with a big payout on the reels of Age of the Gods.

Features of Age of the Gods Slot

Age of the Gods is a 25 pay line slot with 5 reels and 3 rows. Players are able to bet anywhere from $0.25 to $500 per spin in some casinos. To adjust your bet size you will need to adjust your Line Bet from 0.01 to 25 per spin. After you set the bet you can use the Spin button or the Auto Play option and you can also activate the Turbo option for a faster game play. The slot has great graphics and animations which give it an attractive look.

The pay table in Age of the Gods starts with the low tier card symbols which range from Q to A. The payouts increase with the Helmet, Athena, Hades, Hercules, Poseidon, Zeus and Hera symbols. The game also has a Wild symbol and a Scatter symbol installed.

Age of the Gods is a video slot game coming from Playtech. This slot, as all other slots from the series, are replacements for the legendary Marvel Jackpots. Playtech didn’t manage to renew the license for these slots with Marvel after they were acquired by Disney. So in order to fill in the gap for some of the most popular slots in their portfolio the designers came up with the Age of the Gods series. They are basically the same slots with the same features and design only different game symbols.

Age of the Gods has a very interesting bonus feature which is triggered by landing 3 or more scatter symbols anywhere on the reels. Here you will have 20 icons to pick from. Each icon contains one of the four god symbols and one Hades symbols. You will need to match three god symbols in order to trigger the corresponding feature. If you uncover the symbol with Hades the bonus round will end. You can trigger the Athena bonus where you will get 9 free spins. On every spin Athena can award a x2 to x5 multiplier to all winnings. In the Zeus feature the player is awarded with 9 free spins. One wild symbol will be added to the central position on the central reel and the bonus is played with one extra wild symbol. Also the free spins start with a x1 multiplier and on every 3 spins the multiplier is increased by 1. Poseidon awards 9 free spins. On each free spin Poseidon can award anywhere from 1 to 5 random wilds anywhere on the reels. Hercules also awards 9 free spins. He will stand as a sticky expanded wild on the central reel for all of the free spins. There is also one extra feature in the slot which is triggered during base play. If you manage to land all 5 gods symbols in any order on a winning pay line you will be awarded with 200 x line bet.

The jackpots in the game are triggered randomly. You can trigger the jackpot on any spin and on any bet size. You will be taken to a separate screen where you will need to match 3 jackpot logos. You can win the Power, Super Power, Extra Power or Ultimate Power jackpot. 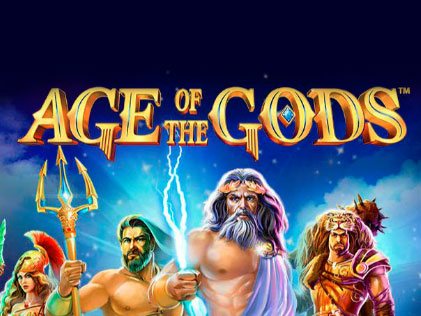 Age of the Gods is a very interesting slot game because of the free spins bonus round and the attached jackpot prizes. Players can win big during the free spins bonus especially if you manage to trigger several bonus features until you reveal Hades on the screen. The jackpot prizes are very attractive, since you can win any of the jackpots while playing on minimum bet.

Top Casinos to Play Age of the Gods Slot

Rate Age of the Gods Slot & Write a Review