The city is under attack from a crazy jerk and to save the day are four meta humans. Arcane Reel Chaos Slot, which is powered by NetEnt, brings you this real life scenario on the reels. Featuring 5 reels, 3 rows and 20 paylines, this Slots machine is based on heroic theme where like any other predictable superhero plot, the meta humans fight the evil Deep Pockets to bring glory to the city. The four superheroes - Flare, Zero.X, Chrono and Psyop – each bring their super power to the reels, only to shower upon you some Stacked Wilds, Multiplying Re-Spins, Multipliers and Overlay Wilds.

The big face-off between the evil and superheroes during the Free Spins bonus round is something to look forward to. Every time a hero defeats Deep Pockets, a bet line multiplier increases, giving up to 4 times the payline win. When all heroes come together to defeat the evil then an extra special prize, called 'Victory Bonus', is awarded. Enriched with unique bonus features, Arcane Reel Chaos Slot is packed in an exquisite design. Before you head out to experience this ultimate reel chaos for real money, we highly recommend you to try it for free in the demo/play for fun mode at any of the NetEnt Online Casinos.

The reels of Arcane Reel Chaos Slot machine are set within the ruins of an old cathedral and spinning on the reels are four meta-humans who are incessantly putting their best foot forward to save the city from the evil Deep Pockets. The plot might sound as cliched as any other heroic theme, but the visuals and configuration are intriguing. The graphics, animations and sound effects of the game will come as no surprise if you are already familiar with the brand NetEnt.

As mentioned before, Arcane Reel Chaos Slot features 4 mini bonuses (Psyop's Stacked Wilds, Zero.X's Overlay Wilds, Flare's Multiplier and Chrono's Re-Spin) and a Progressive Free Spin round, which are explained in detail below:

Arcane Reel Chaos Slot is designed and developed by one of the big-shots in the industry, NetEntertainment. This Slots machine is the first ever NetEnt game to feature the new Player User Interface (Play UI). This new extraordinary interface is designed to deliver a more streamlined way to play. Also, the paytable for NetEnt Slots will be displayed in cash value from now onwards, apparently coin value display was more confusing. Nonetheless, the game is playable with both coins and cash value. 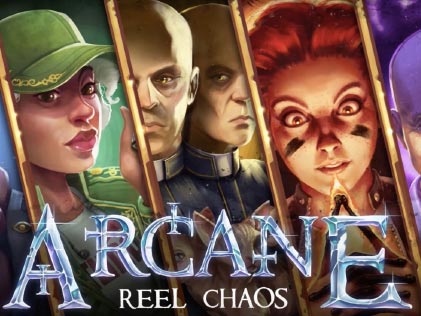 Although Arcane Reel Chaos Slot game is enriched with bonus features, but we found most of them to be quite mediocre with respect to payouts. Chrono's Re-Spin feature is the most powerful one wherein up to 1212.5 times of your stake can be won. Variance wise, this Slot machine is low to medium and the theoretical Return to Player (RTP) is equal to 96.81%. We personally liked the narrative and the well-designed characters of this Slots machine. But, if you are looking for higher potential wins from the same software provider, then try your fortune at Dead or Alive 2 Slot.