Jack in a Pot Slot Review

Spin the reels of the magical Jack in a Pot Slot by Red Tiger Gaming to get lucky!

Jack in a Pot Slot Information

Overview of Jack in a Pot Slot

Based on an Irish theme, The Jack in a Pot is 7*7 slot game that features cluster pays as opposed to the usual paylines. With all things bright and representing good fortune, this magical slot by Red Tiger Gaming awards wins as high as 2000 times the stake or bet. Additionally, the Jack in a Pot slot can be played on all devices from 10p to £200 per spin. Set out on a quest with Jack, the Leprechaun and collect Magic Pipes, Leprechaun shoes and other mythical things to unveil interesting and rewarding features.  Packed with plenty of fun elements and exhibiting aesthetic graphics, the Jack in a Pot slot will certainly make for an interesting game play.

Should you decide to give this new and exciting magical slot a spin, read our unbiased review with an option to try this Red Tiger Gaming slot for free via the Casino Leader demo version available below.

Features of Jack in a Pot Slot

Set amidst a landscape featuring evergreen trees in a hedge format, the Jack in a Pot Slot makes for a perfect setting just as you would expect in an Irish themed slot with mythical characters. The bright visuals include a gold pot with gold coins scattered around and plenty of four leaf clovers in the view. The Jack in a Pot slot has high quality graphics and animations that provide the required edge to this online slot game. A lively and vivacious soundtrack plays in the background with sounds amplifying with every win.

Try this slot here and who knows you might be lucky to find your pot of gold with Jack, the Leprechaun waiting for you at the end of the rainbow!

In order to facilitate easy understanding and allow the players to decipher what each button available in the game is for, a comprehensive list has been provided below :

Instead of using the regular paylines, the Jack in a Pot Slot game incorporates cluster pays and makes for an interesting game play. The symbols in this online slot game powered by Red Tiger Gaming are kept in sync with the Irish theme of the slot. All the symbols have been fully explained below :

Special Game features of Jack in a Pot Slot

This feature is triggered when a rainbow wild forms a part of the winning combination or cluster. Under this feature, a portion of the reels are covered with a giant rainbow that enables random symbols to be swapped with other symbols of the same type which results in better and higher wins!

When the winning combination features a Beer Wild, the Beer Reels Feature is activated. Aesthetically pleasing, the feature turns on Beer Taps on the random reels that is might be placed above. The tap pours down new symbols for a possible winning cluster on the reels it is triggered on.

This feature is triggered as soon as a Magic Pipe Symbol forms a part of the winning cluster. After the feature is activated, Jack the leprechaun blows his pipe which transforms some of the higher paying symbols into mega tiles resulting in a new and possibly a higher winning combination.

The Hat Trick features when activated replaces any low paying symbols with other symbols for a potential chance to win higher and better. Under this feature, Jack the Leprechaun, swings his hat into the air which pulls all the low paying symbols into the hat for a new pay out combination to follow.

Software Provider of Jack in a Pot Slot

This new and magical slot with an Irish theme is backed by Red Tiger Gaming, a name synonymous with providing some of the most advanced casino games. To ensure no one misses out on the fun and action provided by Red Tiger Gaming, all its games are optimized for mobile and runs on an array of operating systems and hand held devices including iOS phones, iPad, Android devices and Windows.

The games backed by Red Time Gaming feature cutting edge technologies which enables it to render an unmatched online gaming experience. This software provider has become a premier choice for players online as a result of an extensive selection of games that it offers. Try your luck with Jack in a Pot Slot also powered by Red Tiger Gaming, here and win big! 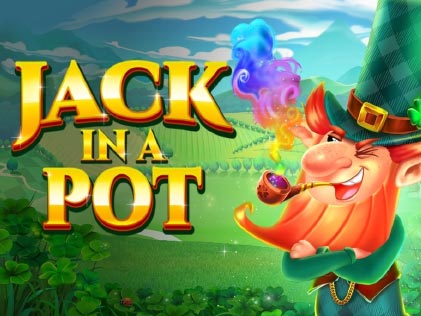 Notwithstanding the bet level of a player, the Jack in a Pot Slot by Red Tiger Gaming is a medium level variance slot and offers a massive 96.06% return to the players. Apart from the RTP, there are plenty other unique features that keep the players interested in this slot including cluster pays,bonus features, free spins that help multiply your chances to win. The Jack in a Pot slot employs the latest HTML 5 technology which facilitates the game to run without a glitch on all supported devices including desktop, mobiles and tablets. Feeling lucky already, are you? This Red Tiger Gaming Slot is a must try for all the players looking for fuller wallets, entertainment and fun galore.

Top Casinos to Play Jack in a Pot Slot

Rate Jack in a Pot Slot & Write a Review